OPINION: ‘Screaming Christian’ at Burnaby station has neighbours fed up

Complaints have been coming in about a man making a lot of noise about his beliefs in a densely populated area
Aug 10, 2020 7:57 AM By: Chris Campbell 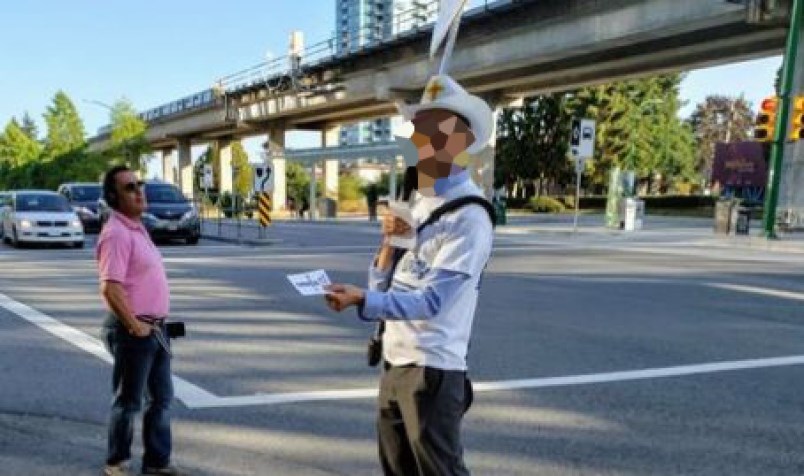 This is allegedly the 'screaming Christian' who rants at Burnaby's Metrotown SkyTrain station. Submitted photo

That’s what a Burnaby woman is begging for after weeks of having to listen to someone being called a “screaming Christian” in the area around the Metrotown SkyTrain station.

Metrotown is the city’s busiest station and attracts a few colourful characters, from panhandlers to thieves breaking into area vehicles and, yes, some people who rant into the sky.

In the past few weeks, I’ve been contacted by three Metrotown residents with the same complaint. It’s become unbearable because this “screaming Christian” can be heard because windows must be kept open to deal with the summer heat.

And it’s not just the screaming, it’s what this person is screaming about.

“I am at a loss as to who to contact about this as several phone calls and emails to the city have gone nowhere,” said one resident. “The man that is frequently outside of Metrotown SkyTrain station with a sign and a lot to say about Jesus. I don't understand why nothing can be done about him. I live in a nearby building and have to listen to his offensive and crude rantings at least once a week. On top of that, I needed to explain to my eight-year-old daughter what ‘masturbation’ and ‘bum sex’ were yesterday. I am repeatedly told that there is ‘nothing they can do’ by TransLink staff or to ‘call the city.’ Doing just that has also got me nowhere as I have been told by them to contact TransLink. Is this just something I have to accept living in Burnaby?”

Another woman told me people just walk by and ignore this person, but she can’t because right now she’s working from home and, like I said, it’s too hot to keep her windows closed.

I have dropped by this spot a couple of times to see if I could find him, but have had no luck.

If you do, please let me know.