Depending on where I scrolled, Skookum was either Vancouver’s greatest music festival ever, or the worst. If I checked Instagram, it was nothing but love, hugs and defiantly dripping, smiling faces in the pouring rain, while Father John Misty or Bahamas crooned to crowds of thousands in the background.
0
Sep 10, 2018 4:00 PM By: Grant Lawrence

When I first started at the CBC, I remember being shocked that the host of the radio show I worked for never went out to gigs anymore, even shows stacked with his favourite bands.

At the time, that host was in his mid-40s with two young kids at home. I thought he was so incredibly lame, and I swore I would never be like him.

Cut to 20 years later: I’m in my mid-40s with two young kids at home. I hardly ever go out to see live shows, including those stacked with my favourite bands, which is so incredibly lame. I am now exactly like him.

Case in point: Due to domestic commitments such as “family movie night,” minor hockey and an assortment of antibiotics and ointments, I completely missed this past weekend’s inaugural Skookum Festival in Stanley Park. The event had no less than about 20 of my favourite bands performing. Due to extreme FOMO (fear of missing out), I tracked the festival every moment I could on social media.

Depending on where I scrolled, Skookum was either Vancouver’s greatest music festival ever, or the worst. If I checked Instagram, it was nothing but love, hugs and defiantly dripping, smiling faces in the pouring rain, while Father John Misty or Bahamas crooned to crowds of thousands in the background.

That was killing me, so I quickly flipped over to the much more negative Twitter, which provided plenty of schadenfreude-like entertainment. On Twitter, #SkookumFestival rants overflowed like a clogged Porta-Potty.

According to Twitter, it became apparent very early on that while the music at Skookum was top shelf, the logistics were not. That made me feel a little better about my own situation, stealing glances at my phone while the kids giggled through Minions. 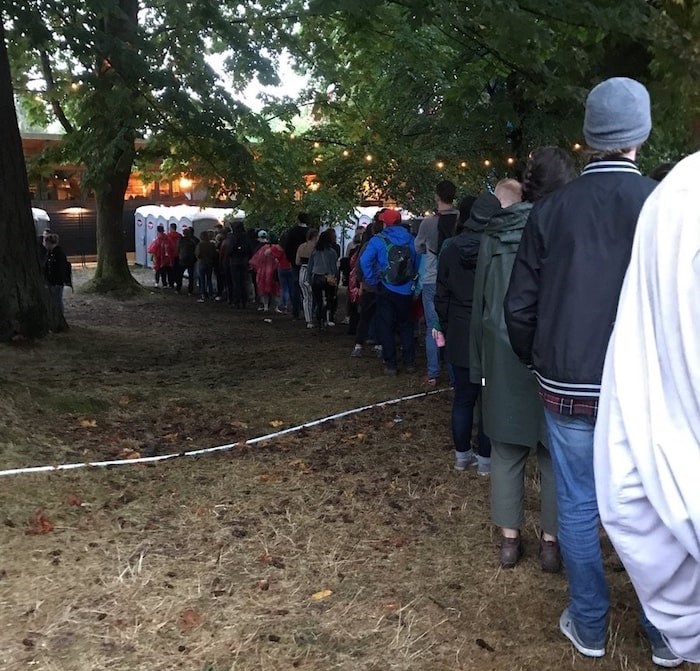 Lineups to washrooms and food trucks were the common theme to audience complaints. Photo Kyle Tsang/Twitter

Tweets raged about the lack of Porta-Potties, the lack of food and beer, and the epic lines — at a festival that billed itself under the banner of “Music. Food. Art.”

Been to many fests in many different places and I’ve never experienced line ups like these I mean you think it’s ok to wait 45 minutes to use the bathroom? It literally turned into shit show last night with ppl relieving themselves everywhere #SKOOKUM

The messages #MyWife is sending me from the #Skookum festival are like soldier's letters from the front. Sounds like she'll be coming back from Vancouver with trench foot and a case of dysentery.

Some of those comments led me into the trenches of the #SkookumFestival Twitter conversation. To either torture or reassure myself, I asked Skookum 2018 attendees to rank their experience on a scale of one to 10 (10 being best).

Here are some of the replies I received:

4/10. Line ups for food and washrooms were bad Friday, worse on Sat. I walked down today and saw the massive entry lines at gates 1 and 3 and gave up. I have better things to do with my time. Good musical line up, great crowd, worst festival I have ever been to. #SKOOKUMFestival

2/10. Insane line-ups for food (think well over an hour) and the same for the toilets. Too many bands. You'll miss some for sure. Stupid rain.

Having a festival in Stanley Park is amazing & a great line up of artists. Lineups are expected but the lineups for bathrooms are insane. Logistics for leaving the park @ the end need work, trying to ride on unlit bike path with pedestrians all over it felt dangerous for all 6/10

5/10
Great venue, amazing line-up.
Nowhere near enough food and toilets.
We left at 7pm, after the restaurant we lined up for ran out of food. Missed Metric and Florence, because we needed food and to pee. It was that or spend the next 2 hours in line-ups.

Yes, it rained. Yes, one person asked if “Skookum” meant “lineup” in Coast Salish. Yes, I heard people were offering cash for prime spots in the Porta-Potty lineups.

But it wasn’t all bad. On the musical side of things, I gleaned that Matt Mays was the sleeper hit of the opening night; that the Arkells brought the house down as expected on their rapid ascent to Loverboy’s throne; that Said the Whale debuted a song called “UnAmerican,” which could be their next radio hit; that Mother Mother played to a monstrous crowd; and that it was unclear whether it was raindrops or tears of joy streaking down fans’ faces at the St. Vincent set. Argh. FOMO!

Here’s hoping that Skookum lives up to the actual meaning of its name, and flushes out the operational backups for beers, bathrooms and beyond. Maybe my timing will work out perfectly when I finally show up to Skookum for the Weakerthans reunion tour.

Let’s end this on a positively skookum note, eh?

I’ve had an amazing weekend. You need to expect and be prepared for lineups when you have crowds of this size in a popup venue such as this. I’m sure they could have done with more food tents and toilets, but overall my experience has been a 10/10. Looking forward to next year!