Opinion: The price is too high for Canadian Black Friday

Nothing makes a self-righteous Canadian feel as smugly superior as videos of the annual retail riots south of the border.
0
Nov 28, 2019 2:47 PM By: Jack Knox

Nothing makes a self-righteous Canadian feel as smugly superior as videos of the annual retail riots south of the border. Gunfights. Fistfights. A mother pepper sprays fellow video-game shoppers in L.A. An elderly woman is stomped by a Texas man as he wrests a television from her hands. Tis the season. 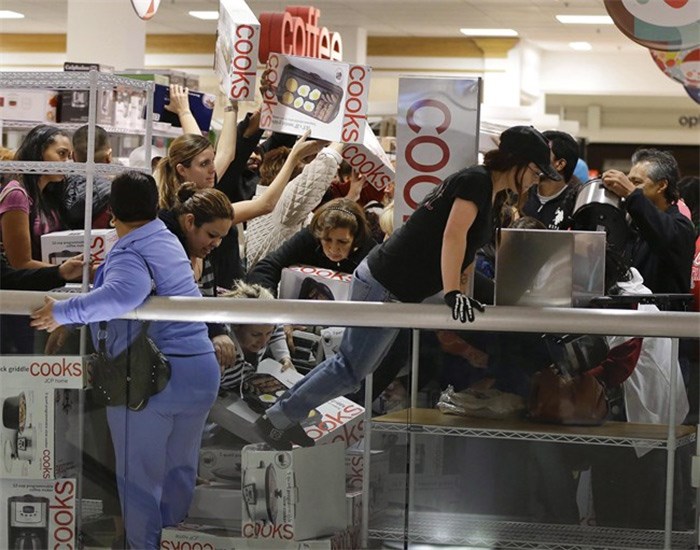 Shoppers rush to grab electric griddles and slow cookers on sale for $8 shortly after the doors opened at a J.C. Penney story in Las Vegas on November 23, 2012. Chaotic images of people clamouring to be the first through the doors to get their hands on hot deals have become synonymous with Black Friday in recent years. However, the one-day shopping frenzy at malls and stores following American Thanksgiving may be on the decline as some consumers and retailers start to shun the tradition by either opting out entirely or turning to internet shopping instead. THE CANADIAN PRESS/AP, Julie Jacobson

U.S. news sources report Black Friday has been quieter the last couple of years. Less violence. The pre-dawn lineups of shivering shoppers are gone, too. So are many of the shops that used to draw the longest queues. According to the New York Times, a record 8,000 stores closed in 2017. Think Sears.

So are Canadians, which is why our retailers feel forced to stage Black Friday sales, too.

On the face of it, Canadian Black Friday doesn’t make sense, seeing as the event is built around a holiday, American Thanksgiving, that we don’t celebrate. The reality, though, is that it has been permanently etched on our calendars since 2013, when the increase in duty-free limits and the ease of online shopping compelled merchants to try stanching the cross-border bleeding.

Good luck with that. We continue to shovel money out of our own communities, our own country. On Monday, FedEx released a survey showing Canadians are 40 per cent more likely to shop online this Christmas than last.

It’s the convenience of it, the survey showed. You don’t even have to get dressed to buy a gift. (Hey, I like shopping in my pyjamas, too, though it draws odd looks at Capital Iron.)

But at what cost? It’s the bricks-and-mortar businesses here at home that provide the jobs and pay the property taxes that keep the local economy moving. When they say you get what you pay for, that also applies to policing, fire protection, education and health care.

Charities, too. Note that the not-for-profit sector is the No. 3 employer in Victoria, says Steve Pearce. “I can tell you, Amazon isn’t donating to them,” he said Wednesday.

Pearce is president of Think Local First, an organization driven by Greater Victoria small businesses that, well, want your business, and not just at Christmas. Last week, it was pushing its Think Local First app, which allows those who visit one member store to collect points that can be redeemed at another.

More broadly, the group is encouraging online shoppers to shift just 10 per cent of their buying back to local stores. The theory is that if consumers re-engage a little, maybe they’ll re-engage a lot once they discover the value of dealing with merchants who know their products and their customers’ needs. “You start to realize these relationships matter,” Pearce said.

The thing is, there are people who already do value retailers’ expertise, picking their brains about the particulars of a product, maybe trying it out — and then going home and ordering it from the U.S. or Asia or wherever online. The practice, called “showrooming,” makes Pearce grind his teeth a bit.

Others are fine with it, and are fine with routinely chasing cheap deals abroad, too. Choosing not to squeeze every dime out of a paycheque is a luxury that many can’t afford. E-commerce has changed the rules of the game and they’re not going to feel guilty about it.

Fair enough, but don’t pretend there aren’t consequences. Want to shop via Amazon? Fine, as long as you call Jeff Bezos instead of 911 when you hear a burglar coming through a window at 3 a.m. Want to ship your shirts from Shanghai? No problem, as long as you’re good with flying to a Chinese hospital when your appendix bursts.

We all like a deal, but don’t lose sight of who’s getting trampled in the process.