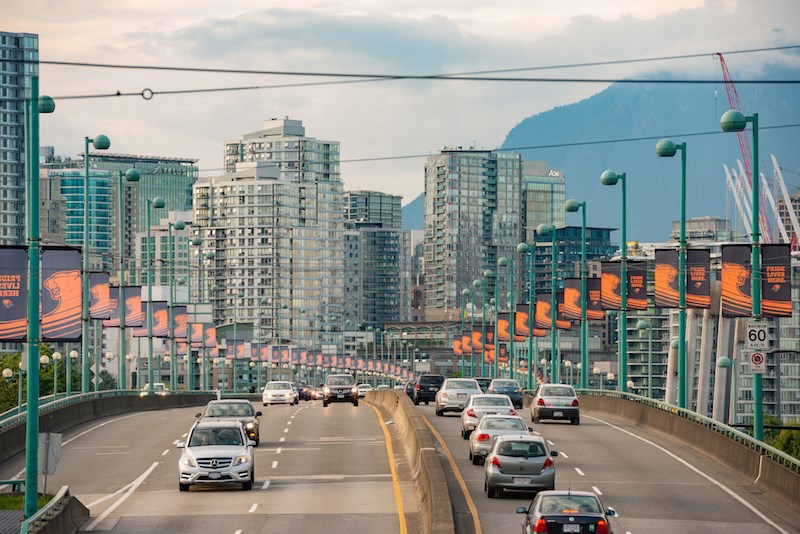 In Vancouver, Canada at rush hour vehicle traffic drives in both directions, in and out of downtown crossing the Cambie Bridge. Right now, mobility pricing - a per-use toll on driving in select high-volume zones in Vancouver - is a hot button issue. Photo: Getty Images

Mobility pricing is a widespread pay-per-use system for public roads. It would toll drivers for using public roads or crossing specific boundaries. The intent is to ease road congestion and reduce carbon emissions.

Although TransLink and Metro Vancouver municipalities have expressed interest in this transportation scheme, it requires approval from the provincial government.

Models have been administered in London, Stockholm, and Singapore, with a system pending application in New York City by 2022.

Mobility pricing punishes people who live in the suburbs

The Mobility Pricing Independent Commission’s report to the TransLink Mayor’s Council in May 2018 estimated that mobility pricing would cost drivers between three to eight dollars per day ($1,000 to $2,700 per year) to reduce congestion by up to 25 per cent.

“If you live in Port Coquitlam, Pitt Meadows, Maple Ridge, Langley, Surrey, Abbotsford, and even further out — as an increasing number of people do — [mobility pricing] will ding you.”

West sees proponents of this policy as “detached from [the] reality” of working-class families.

“I’m put off by the sort of smug, kind of moral superiority of people who articulate these ideas in certain ways…  ‘It's good policy, just bad politics.’ So who gets to decide what’s good policy?”

“Is it good policy for the family that lives in Abbotsford because that’s what they can afford and the parents work in Burnaby or Coquitlam… to pay what could be upwards of three thousand dollars a year? Someone thinks that’s good policy?”

West insists that provincial and federal governments must fund public transit, as they have historically. He further suggests that TransLink consider a land-value capture tax on property adjacent to mass transit routes.

“When taxpayer dollars are invested to bring SkyTrain to an area, those surrounding properties realize a massive increase in land value. That windfall should return to taxpayers to expand transit options in parts of our region that are experiencing significant population growth.”

West rejects this being a political issue.

“When I have articulated my concerns about the inequity of mobility pricing because I come from and represent an area where people are reliant upon their vehicle to get to work, to live their life, to get their kids to different places… ‘Oh that’s just some cheap populism’. No, it’s not. It’s reality.”

“You like it. You think it makes sense. That’s fine. I just think there’s a certain smugness around this idea,” says West.

Although West insists that his stance is not about politics, he concedes that ignoring the circumstances of middle-class constituents may indeed come with political consequences.

“When you continually send the message that you’re not really interested or don’t care about the concerns of working people, don’t be surprised when they start voting for someone else, even if that person is incredibly objectionable on a number of fronts.”

Even if West sees mobility pricing as bad policy, it may also be bad politics if swathes of the population are not adequately considered.