Jack Knox: Oprah buys into our neighbourhood (for sure, maybe) 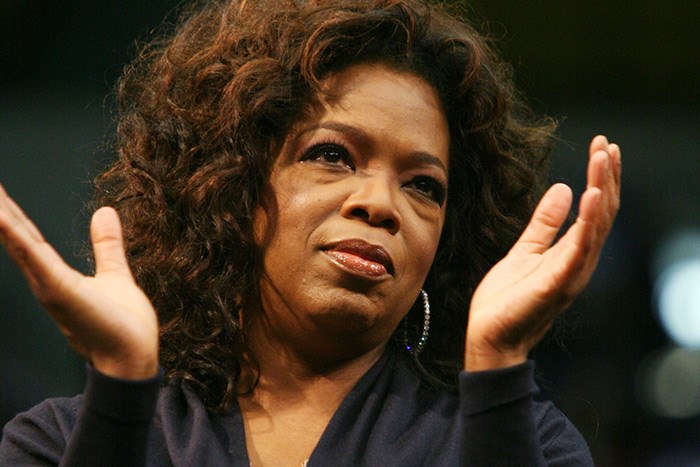 Oprah is moving next door. She just paid $8.3 million US ($6.7 billion Cdn) for a 43-acre compound on Washington’s Orcas Island, 35 kilometres east of Sidney.

The news was in Variety and TMZ and the celebrity real estate blog Velvet Ropes, so it must be true. Definitely. For sure. Maybe.

OK, maybe she’s not actually moving there, since Oprah buys property like Trudeau takes selfies, but still the story has the island of 5,400 abuzz.

It’s not like celebrities are foreign to Orcas Island. John Wayne used to bob up in his boat. Johnny Carson hung out here. Ditto for Barry Manilow. These days, singer Josh Groban comes to visit his parents. But Oprah Winfrey is, like, Oprah. “Josh Groban kind of blends in with sunglasses and a hat,” says Lisa Boyd, who works at the island’s chamber of commerce. “Oprah is going to be harder to disguise.”

Boyd says it had been rumoured for months that Oprah was buying the remote waterfront property. It’s also rumoured that she snapped up several commercial properties.

Vancouver Island knows what’s that’s like. This place is a veritable Who’s Who of celebrities who are rumoured to live here but have never been seen at all.

In Victoria, they are most often not seen on the battleship-sized yachts that slip into the Inner Harbour with helicopters perched astern. “That’s Bill Gates/Barbara Streisand/Jimmy Pattison’s boat,” people say. “Ryan Gosling/Sandra Bullock/Al Gore is on board.” Sometimes it’s even true: In 2007, Oprah pulled into Alert Bay on Pattison’s 45-metre Nova Spirit.

Our invisible celebrities often inhabit (or don’t) palatial homes tucked away on sprawling waterfront properties. “That’s where Aerosmith’s keyboard player lives,” people will say, nodding at a long driveway that disappears beyond a set of iron gates. “My neighbour’s cousin dewormed his tiger.” No one every sees them firsthand.

The leafier the location, the more-entrenched the rumour. No one would believe that Danny DeVito hadn’t purchased the old Grouse Nest estate in East Sooke. Radar from MASH was supposed to have an island in Ganges Harbour. People swore that Elton John and Steven Spielberg had bought on Salt Spring, which is not home to so many A-listers that the gossip mill doesn’t even bother with anyone who hasn’t won a Grammy or slept with at least two Kardashians.

Then there’s John Travolta, the Scotch broom of celebrity real estate rumours. Just when you think you have him beaten down in one place, he pops up somewhere else.

“There was a long-standing rumour that John Travolta owned a home overlooking south Chesterman beach but it turned out it was actually owned by a Microsoft engineer,” Tofino Mayor Josie Osborne said Tuesday. In 2003, word was Travolta had bought in North Saanich, though the location bounced from Deep Cove, to Land’s End Road, to Chalet Road, to Ardmore, to Villa Madrona, which was then owned by Ralph Bodine. “I heard he bought my farm, too,” Bodine told the TC’s Jim Gibson, referring to a nearby racehorse nursery.

In reality, our celebrities tend to be homegrown, not imports, or at least have some local connection. Sarah McLachlan has a place at Tofino. Kim Cattrall went to one of the Comox Valley’s high schools and Pamela Anderson another. There was no problem pulling the mothers to parent-teacher night when Colin Firth had a kid at Glenlyon Norfolk School.

But total outsiders swooping in? “I’m sure there are some celebrities who own here,” says veteran Salt Spring realtor Myles Wilson. They won’t announce their presence, though, or even buy under their own names. When it comes right down to it, though, the only celebs Wilson ever spotted in Ganges were Patrick Swayze and Goldie Hawn and that was years and years ago. Anyone else? Um, Stuart Margolin from The Rockford Files used to live on Salt Spring. Not exactly Oprah.

But then, how likely is Oprah to volunteer for the fire department? And will Travolta be home when you need to jump-start your car? Forget car-pooling to work with Elton John, he doesn’t look like an early riser. Besides, chances are that anyone moving to the edge of the world really just wants to be left alone.