How NOT to eat an oyster: A cautionary tale

Sit right back and you'll read a tale of a fateful anniversary dinner, and an oyster, gone horribly wrong.
May 22, 2019 2:43 PM By: Grant Lawrence

Have you ever been involved in a multi-course dinner with a group of strangers at a fancy restaurant? Such an event was what my wife signed us up for on our ninth wedding anniversary.

Even though I would have preferred a dinner for two, I was game. Many new eateries in Vancouver have gone the way of communal seating. I’m used to it and I support the social concept. 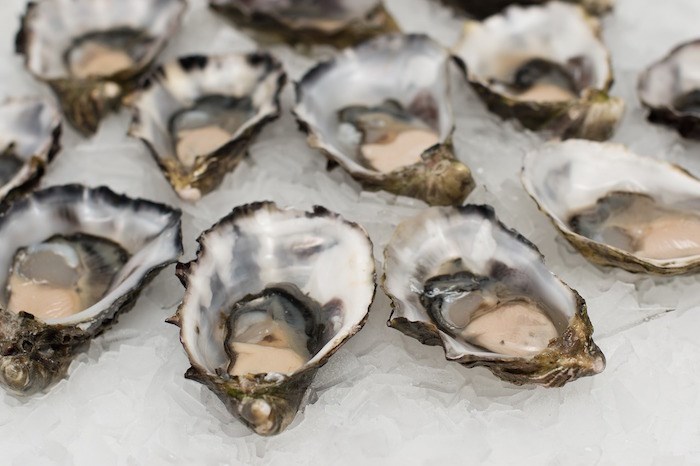 That was until our ninth anniversary dinner.

When we arrived at the restaurant-that-shall-remain-nameless (we’ve had a great experience there in the past) we were informed that a wine maker direct from the Okanagan would be at our table for the entire meal, and that I would be sitting beside him.

After introductions were made, I quietly informed him that I was a beer guy and that, after the first glass of vino, I wouldn’t be partaking in the wine pairings of the many, many locally sourced food courses to come. The wine guy looked at me with a mix of shock and confusion.

“You...don’t drink wine?” He stopped short of adding, “So then why the hell are you at this dinner?”

I was beginning to think the same thing.

The first course arrived as the wine guy was in the middle of a loquacious spiel about the pairing — something about the airy scent of the rosé reminding us of the lost summers of our youth.

The description went on for so long that the food server clearly didn’t want to bust in to tell us about the first course, but everyone could see it was a single oyster on the half-shell balanced on a small garnish heaping of what I assumed was couscous. My wife thought the garnish was either a bed of finely minced radish or possibly something called rémoulade.

Oysters really aren’t my thing either, but I was determined to go with the flow as much as possible for my wife’s sake.

I quickly popped the raw oyster into my mouth and then scooped up the entire garnish to mask the taste. Within seconds my lips, tongue and throat felt like they were on fire. I winced in discomfort, then gagged and coughed. I leaned over and loudly spat onto the plate what I hadn’t swallowed.

I looked up, teary eyed, as a table full of strangers came into focus. They were staring at me with various expressions of disgust and bemusement. My wife immediately checked to see if I was choking on the oyster.

Yes, it turns out that the garnish heap was neither couscous, radish or rémoulade, but rather a mound of raw, coarse and colourfully speckled sea salt.

If you’ve ever had the unfortunate occasion to consume a large dollop of salt, you’ll know that it tastes disgusting, and at that quantity, it immediately burns everything from your lips all the way down to your esophagus.

Thoroughly embarrassed and horking violently, I excused myself to the washroom where I repeatedly tried to wash my mouth out to little relief.

Eventually I returned to a table full of inquisitive eyes. I leaned over to the wine guy and whispered hoarsely, “I ate the pile of salt that was under the oyster.”

He once again turned to look at me incredulously. He took a moment to possibly stifle a laugh, and asked, “Do you...go out?”

I gritted my salt-encrusted teeth. I then turned to my wife and said under my breath, “Let’s get the hell out of here.”

“Who serves something on a plate that is inedible, with no warning? Let’s go.”

My wife heard what the wine guy had said to me. She thought about it for a few moments while I continued to hack and spit up into my serviette.

As we got up to leave, the wine guy popped up from his seat.

“Where are you two going?” he asked urgently.

“What? For real?” He grabbed me by my shoulder.

I spun around and summoned the toughest glare I could from my punk rock past.

The owner rushed over as a brouhaha began to unfold in front of his dining room. He shuffled all of us outside onto the sidewalk. I fumed and hacked a few doors down while the wine guy pleaded his case and my wife explained things to the owner, who apologized and kindly promised a refund.

At work the next day, when I shared this story, my co-workers were split. One wondered if I also tried to eat the oyster shell like some sort of all-consuming caveman. Another reminded us that Japanese restaurants don’t warn us about the wasabi. Another countered that Mexican restaurants almost always explain which is the hottest salsa.

And so I ask you, dear reader: should the restaurant have informed us that the garnish was in fact a pile of salt, or am I a complete idiot who should have intuitively known better?

My wife and I managed to salvage our anniversary dinner by sliding into a popular restaurant a block away, table for two. My throat was still burning and I was desperate for a beer. Our server let us know about their beer special that night: salted lager.