Opinion: No, Yaletown's new public art was not made by the 'Penis Satan' guy 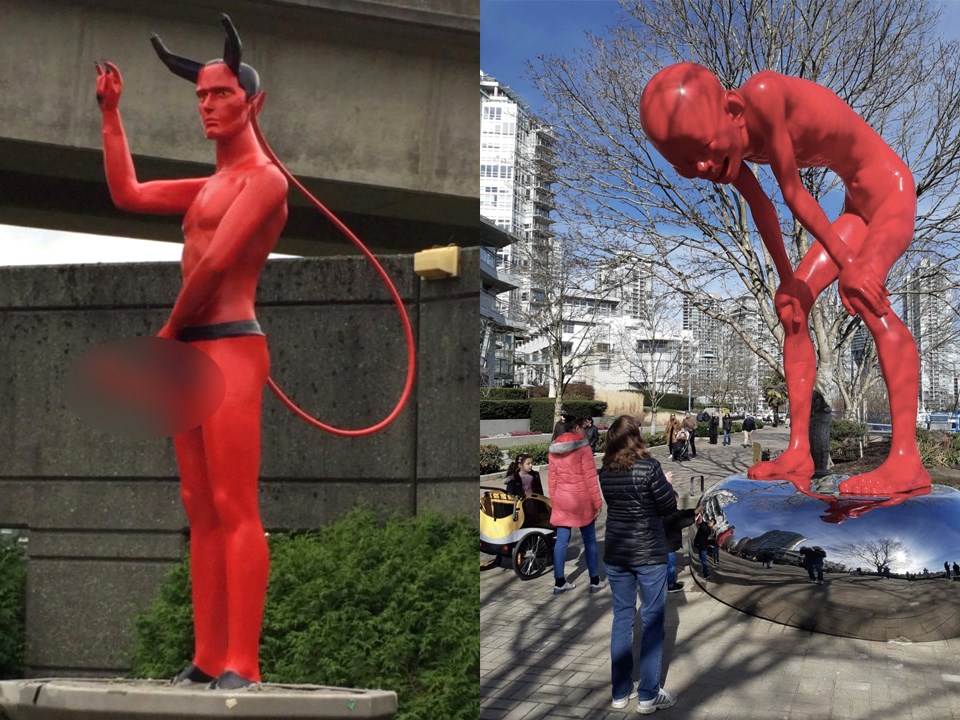 If you think the new Biennale sculpture just installed in Yaletown looks oddly familiar, you're not alone.

Yes, there are other people like you (freaks, as I like to refer to us) who laid eyes on the newly installed "The Proud Youth" sculpture and instantly thought back to September 9th, 2014. That was the day that the now-legendary piece of public art that came to be known as "Penis Satan" mysteriously appeared on Clark Drive near Great Northern Way.

Penis Satan was a life-sized fiberglass sculpture of the devil throwing the horns, endowed with an erect unit on display for everyone to see. It was installed in the dark of night by an artist who had hoped to remain anonymous.

Within two days of going up, City of Vancouver staff took him down off of the literal concrete pedestal he was glued onto, then encouraged the artist to come and claim him.

Unfortunately, poor Lucifer was abandoned and eventually made his way into the trash. However, a few years later Glacier Media was able to catch up with the artist, who spilled the beans on how the piece of guerrilla art was installed.

The artist goes by the name Obsidian and has no formal training in the arts. The title they gave their devil with an erection piece is actually "East Van Satan," which makes sense but just doesn't have the same ring that Penis Satan does.

They explained that their work was a commentary on sex crimes committed by religious figureheads.

The 3,000 kg piece of public art that went up in Yaletown this week is a lot like Penis Satan in that it's also a naked figure, is all red and shiny, and is meant to make people stop and think. The similarities pretty much end there.

Chen Wenling's The Proud Youth is a much more modest figure, with no visible boner.

The sculpture is "a clear shout-out to our inner child," according to the Vancouver Biennale organizers who brought it to the city so that it can be on public display for the next six months.

"The bright red colour signifies not only auspiciousness in Chinese tradition, but also a testament to the artist’s fiery attitude towards life. The red figure, naked and free, fully reveals his honesty and fearlessness," states the festival website.

The Proud Youth can be viewed for the next six months on the Seawall, just off Marinaside Crescent.

Penis Satan will live forever online, and in the hearts and minds of us freaks who remember him.

With files from Lindsay William-Ross, Thor Diakow, and John Kurucz