The “Parking Ladies” are out in force to lure fair-goers into black market parking for a slightly cheaper rate than the official PNE parking lots.
0
Aug 18, 2019 7:30 AM By: Grant Lawrence

When my family first moved into Hastings-Sunrise, a neighbour was quick to inform us of the unwritten rules of parking on our new street. We had just relocated from the West End, where parking chaos ruled 24 hours a day, so we were all ears. 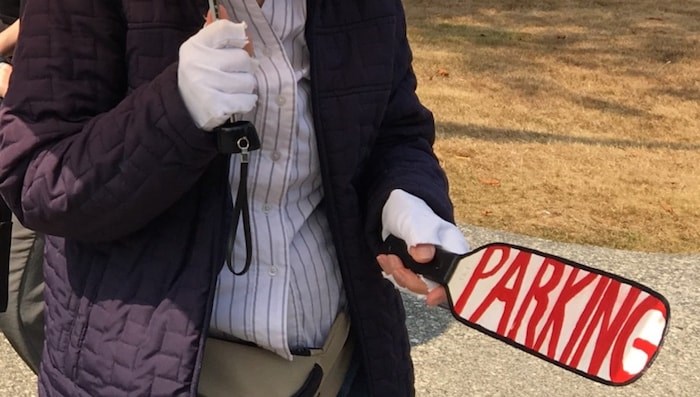 The phenomenon known as “Parking Ladies” or the “Granny Cartel” has become a fixture of the annual Pacific National Exhibition. Photo Grant Lawrence

This neighbour also told us if we followed this simple code of conduct, there would never be any need to obnoxiously reserve our parking spot (which was on city property) by placing buckets, cones, plywood, handmade signs or any other physical objects in the space. That was considered uncouth — something tolerated south of McGill, but not on our street. 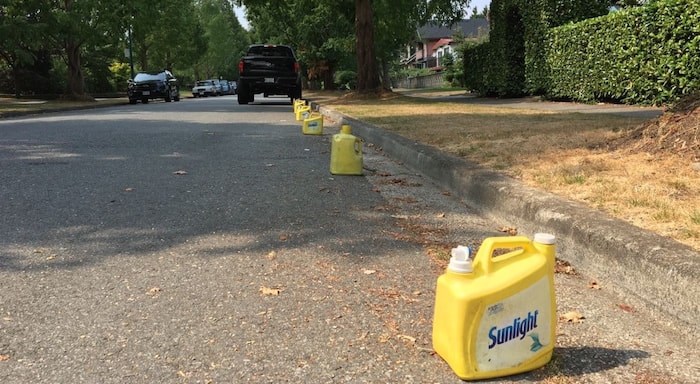 Reserving a parking space in front of your home with buckets, cones, plywood, homemade signs or other physical objects is looked down upon by many residents of Hastings-Sunrise. Photo Grant Lawrence

We did as we were told and, lo and behold, it worked — 98 per cent of the time, we have a parking spot.

With ever-increasing density, this type of parking urgency in East Vancouver is a constant battle on most streets, and it’s never more apparent than during the PNE.

That’s when the hyper-local phenomenon known as the “Parking Ladies” or the “Granny Cartel” is out in force, waving homemade parking signs on the corners, in an attempt to lure fair-goers into black market parking on lawns, laneways and in garages and carports, for a slightly cheaper rate than the official PNE parking lots.

Award-winning Vancouver filmmaker Mina Shum perfectly captures the parking barkers with both humour and empathy in her beautiful 2017 movie Meditation Park, which was filmed on location. Shum has lived in the neighbourhood for 25 years.

The PNE parking issue has existed for longer than that. The earliest mention I could find was a Vancouver Sun article from 1987 called “PNE area residents warned of law against parking jam.” The article detailed $15 fines for residents who crammed more than three vehicles on their property at a time. One ambitious chap in the 3300 block of Turner Street apparently managed to cram 20 cars into his backyard.

About five years ago, increasing gentrification of the Hastings-Sunrise neighbourhood caused the issue to overheat again. An acceleration of complaints resulted in a 2012 crackdown that produced a huge sign at Hastings and Renfrew: “Backyard parking is a major irritant to some residents. BE A GOOD NEIGHBOUR. Consider parking in PNE lots, taking transit, or riding your bike to Hastings Park events.”

An increase in complaints to the city over illegal parking resulted in a 2012 crackdown that produced this sign at Hastings and Renfrew. Photo Grant Lawrence

Announced fines ranged from $100 to $2000, the city stating that “residents are not permitted to solicit motorists, obstruct or impede passage on the streets (including sidewalks and lanes) or call out for the purpose of attracting attention.”

Uh huh. If you were take a drive up Renfrew Street during the last two weeks of August, you’d have to be careful not to plow into groups of shouting seniors waving homemade parking signs. The woman I spoke to at the corner of Dundas and Renfrew offered me all-day parking for $15 on her front lawn (the PNE charges $20 all day in their main lot).

For all of the Parking Ladies’ detractors, some argue it’s a neighbourhood tradition that helps older, longtime residents with extra, tax-free cash to tackle the ever-mounting costs of remaining in the ’hood.

On the busy Hastings-Sunrise Parents Facebook group, the topic of PNE parking, whether on the street or on someone’s lawn, recently exploded into a thread of 90-plus comments.

One mom commented that, because of the Parking Ladies, one of her daughter’s first words was “PARKING!”

Another mentioned it took the Parking Ladies 15 years to stop jumping out in front of her car, when they finally realized she actually lived on their block.

One person said it’s often not just the ladies on the corner who are in on the action — several other houses on various blocks subcontract their yards out for a split of the profits.

Whatever side of this annual debate you park yourself on, you have to admit it — the Parking Ladies are one of the defining cultural features of Hastings-Sunrise — just as long as they aren’t selling public street parking. I also draw the line on those buckets and cones. That’s uncool. If you tried that shit in the West End, you’d get your bucket kicked faster than you can yell “PARKING!”