You may remember a few weeks back when I wrote about how I thought it was a good thing that the VPD now carry carbine rifles to large events? Well my colleague at the Prince George Citizen , Editor-in-Chief Neil Godbout, has a different take.

You may remember a few weeks back when I wrote about how I thought it was a good thing that the VPD now carry carbine rifles to large events? Well my colleague at the Prince George Citizen, Editor-in-Chief Neil Godbout, has a different take.

The RCMP in Prince George brought out the big guns during Canada Day celebrations and he published a piece entitled Leave the guns at home. I am publishing it in its entirety below, in order to offer an opposing opinion on "the new normal" from a fellow head of a Glacier Media publication. 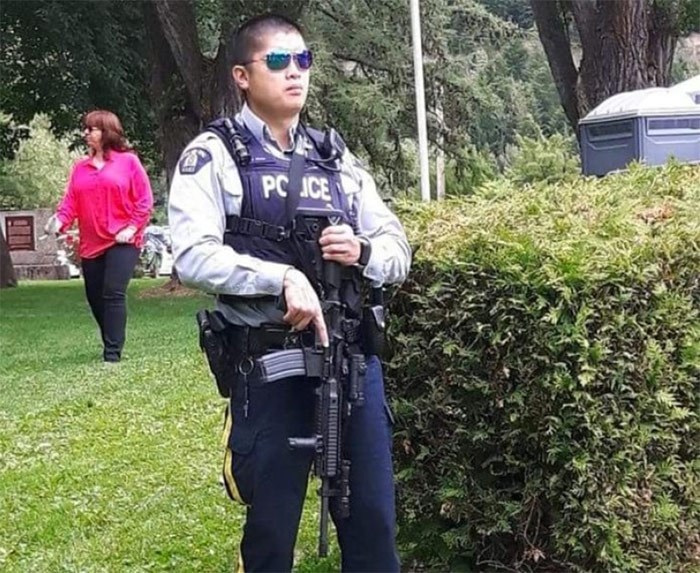 Today is the Fourth of July, America's national holiday to mark the signing of the Declaration of Independence. Americans take the day off, hold large gatherings in public places, celebrate their history and look forward to evening fireworks, just like Canadians do three days earlier on Canada Day.

The difference, up until now, has been that most of these patriotic events in the U.S., particularly since 9/11, feature police officers standing close watch, armed with Kevlar vests and rifles.

And now, based on the heavily armed RCMP presence at Lheidli T'enneh Memorial Park on Sunday celebrations, this is how Canadians will now celebrate Canada Day.

"Since events like Ottawa, Moncton and others around the world, this will be normal at large public gatherings for the safety and security of the public," said Cpl. Craig Douglass of Prince RCMP in an email response asking about the extra firepower carried by its members. "There was no extra concern or threat, this is the new normal."

Normal perhaps to the Mounties but certainly not normal to local residents, who took to social media Sunday unsettled by the pictures of the officers working the park. Normal to local residents - and arguably the majority of Canadians, especially the ones living outside of the metropolitan centres where the RCMP is the local police force - is seeing smiling Mounties walking through the park on Canada Day, saying hi, posing for pictures and soaking up the public's gratitude for their service.

Normal is also a few dingbats who think Canada Day is a licence to consume their weight in drugs and alcohol before crashing a public celebration geared for families. The men and women in uniform step in to either steer these individuals home (with a sober friend or family member at the wheel) or to a police van for a short ride to the drunk tank.

Canadians are certainly blessed to live in such a safe country that the sight of anything more powerful than a handgun, securely stashed in its holster, is upsetting. It's not the firearms that are the real cause for concern, however, but the sight of Mounties brandishing such weapons in the line of duty at a peaceful community event.

That is not normal and, barring a legitimate threat to either public safety or the security of law-enforcement officers, it shouldn't be allowed to stand for normal, either.

This is the same kind of logic American gun advocates use to justify arming teachers, to protect students from the "new normal" of school shooters.

It's the same kind of logic being used across the United States by municipal police forces, even in places that have Canadian levels of crime and murder, to spend millions on used military weapons and equipment, including light armoured vehicles, for the "new normal" threat of terrorism and mass murders.

As Cpl. Douglass notes, there have been tragic events in Canada and elsewhere in the world, including schools, but more guns and bigger guns does not seem to reduce the violence. Were Prince George residents really safer and more secure Sunday because the officers had rifles, not just their usual handguns?

Based on their reaction on social media, they felt more insecure and less safe, which is a perfectly normal and reasonable reaction.

Furthermore, one size doesn't fit all. A greater police presence, including more powerful firearms, may be justified at certain events in certain Canadian municipalities but a blanket edict from the RCMP to cover all of Canada at all major local events makes no sense. Individual officers in charge should have the discretion to police their communities and arm their members at a level the community will find appropriate. If the RCMP brass isn't willing to concede that point, perhaps some direction from mayor and council the next time the superintendent brings his annual report would help.

Meanwhile, a lunatic walked into a newspaper office in Maryland last Thursday and killed five journalists.

The staff at the Capital Gazette in Annapolis didn't ask for more police and more guns. They paid tribute by publishing the very next morning after their colleagues were shot and killed. Craig "Woody" Leydig, the longtime equipment manager of the Washington Capitals, brought the Stanley Cup to the Capital Gazette, his hometown newspaper, on Tuesday to show support for the paper's employees in their temporary location. Another Annapolis native son, New England Patriots head coach Bill Bellechick, sent his condolences.

Sometimes police need bigger guns to do their jobs but watching a crowd of families at Lheidli T'enneh Memorial Park on Canada Day isn't one of those times.