Public bathrooms are an amenity we all need. Yet few of us openly talk about this and, unlike European cities, North American cities provide few facilities.
0
Mar 12, 2019 4:03 PM By: Michael Geller

Last week I stumbled across a most disgusting public toilet in downtown Vancouver.

It wasn’t designed as a public toilet.

Rather, it was a urine-soaked stairwell in the City of Vancouver-owned Gastown Parkade.

Since it was in desperate need of a good washing down, I tweeted a photo to the city and EasyPark, which manages the property. I also tweeted a photo of the extremely filthy wall and canopy along Water Street. Regrettably, I did not receive any response.

Hey @EasyParkVan Could someone please wash down the stairwells at your Gastown parkade. When you go there you'll know why I ask! :-) pic.twitter.com/vKv4pTWtnv

The Gastown Parkade is one of more than 125 parking facilities managed by EasyPark. The parking business is a tough business prone to complaints. But a review of the comments on Yelp and the Better Business Bureau would suggest EasyPark does not appear to be living up to its mission “to provide safe, clean, friendly parking.”

Hopefully EasyPark officials will review and address these comments, since many were valid.

But this column is not about EasyPark. Rather, it is about why the Gastown parkade stairwells and too many other downtown stairwells, back lanes and alleys have sadly become public toilets. 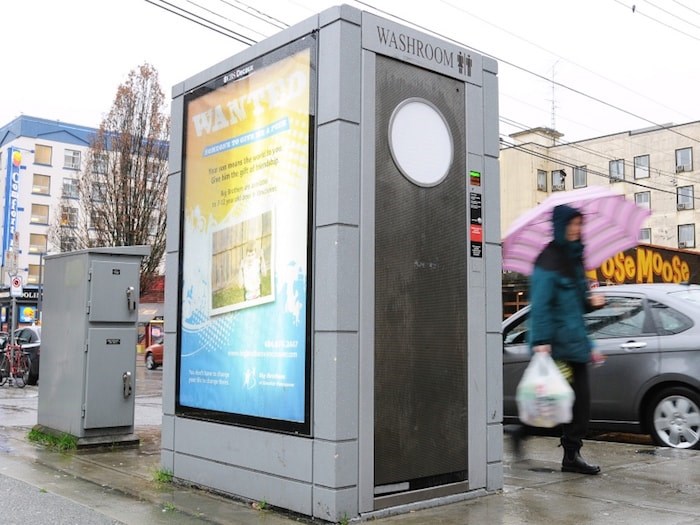 Columnist Michael Geller says public bathrooms are an amenity we all need, and the lack of them is turning downtown stairwells and parking garages into de facto toilets. Photo by Dan Toulgoet

Later that day, I listened to an excellent episode of CBC’s Ideas with Paul Kennedy. Titled “Dignity down the toilet: Public bathrooms as a human right,” it addressed public toilets and why they are so often lacking in North America cities, despite our wealth.

Public bathrooms are an amenity we all need. Yet few of us openly talk about this and, unlike European cities, North American cities provide few facilities. The CBC program explored how governments and businesses can respond to this most basic bodily need, especially for the homeless and other disadvantaged people who simply cannot walk into a hotel or restaurant like I can.

The episode described a group of Ottawa citizens who raised concerns about the lack of public toilets in their city. They eventually developed the GottaGo! campaign, which amongst other things, managed to get Ottawa transit officials to increase the number of toilets in their stations.

It also featured other “toilet activists,” including those who run the U.K.’s Loo of the Year awards program. It measures 100 different bathroom criteria, including whether urinals are free from debris and odour.

Rather than ruin your breakfast with their other criteria, you can find details online at loo.co.uk.

As I reflect on my travels, a vast array of toilet experiences come to mind. Last fall, arriving at the train station in Baku Azerbaijan after an overnight journey from Tbilisi, I desperately needed to use a toilet but didn’t have any local coins. As is the case in many European and Eurasian cities, there was a bathroom attendant, but I could not explain my predicament since I was unable to use Google Translate on my phone.

Eventually I found a policeman in the station who spoke a bit of English, and he paid for me to go to the toilet. This is just one of the many reasons why I have such fond memories of Azerbaijan.

But let’s come back to Vancouver. While the city requires all buildings to have accessible washrooms for tenants and users, there is no similar rule when it comes to public toilets along streets. For homeless people and those on limited incomes, visiting a bathroom in a coffee shop or other business isn’t an option since many businesses restrict their washrooms to customers who have made a purchase.

However, in recent years, a few modern, self-cleaning, public toilets have been installed on select Vancouver street corners. These free automated toilets, which someone described as “shimmering modern outhouses,” are no doubt a godsend for many residents and tourists.

The Downtown Vancouver BIA has completed a map of public washrooms. While there are a few in Gastown and the Downtown Eastside, the city desperately needs many more facilities for both those willing to pay and those who cannot afford to do so.

We also need EasyPark and other maintenance companies to ensure that while we wait for more facilities, their properties do not become the city’s defacto public toilets.

This week is homeless count week. Perhaps it is also a good time to start a public conversation about public toilets.