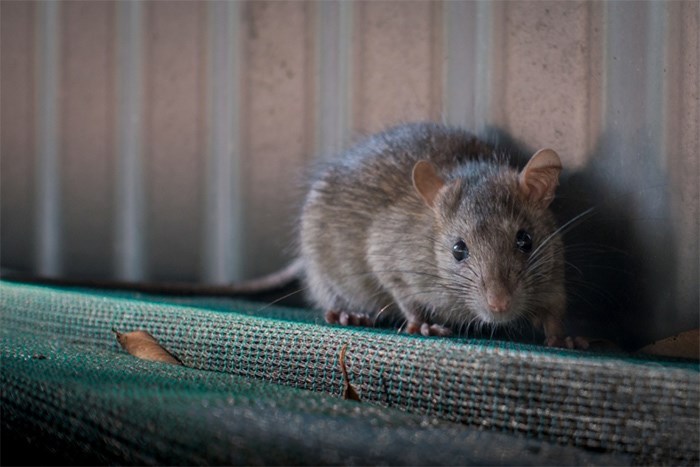 Rats. The very word is enough to make all but the most hardened gutter punk among us squirm with discomfort. That hairless tail, that hunched back, that skittering from one dark, dirty corner of Vancouver to another. Ugh. A rat dashing across a downtown alley is one thing. A rat crawling all over your kid’s car seat is a whole new level of gross.

At the end of every winter for the past several years, Vancouver mechanics see an upswing in cars that have literally become rats’ nests. Looking for warmth and shelter, rats will often nest in vehicles that sit unused for long periods of time. Like, say, during your last extended vacation to Mexico. The rats get into the engine and can wreak mechanical destruction in record time, often attracted to the green-friendly, soy-based lubricant now used on auto electrical wiring. The rats often lick the wires and then chew right through them, disabling your car.

Last spring, the owner of a Porsche Panamera came home from a long trip to discover a rat’s nest under the hood that caused $15,000 in damage. Thanks to rats, even the toughest Vancouver mechanics now pop the hood with caution after a long winter. One too many big hairy rodents have jumped out at them, right in the shop.

Rob Shard is a mechanic at Wetmore Motors who’s seen rats in engines for years. “The rats don’t want to abandon their nests, so they’ll stay in there even when you’re driving the car. One rat travelled under the hood all the way from Bowen Island, onto the ferry, and here to the shop,” chuckled Shard. “Then it took off.”

Rats under the hood can be costly, but what about rats inside your car? Impossible, Richmond mechanic Juan Recacarren recentlytold the CBC, because rats can’t open car doors.

Maybe they can’t, but Christos Koulas, who lives near Main and 22nd, would strongly challenge that theory. Last month, Koulas and his family returned from a two-week vacation. As he put his kids’ car seats back into the family car, a souped-up 2013 Subaru Impreza wagon, Koulas discovered an oval hole on the backseat where the kids’ seats attach.

“At first I thought it must have my wife jamming the kids’ car seats in,” mused Koulas. “Then on closer inspection, I realized to my great horror that it was likely rodents that somehow got in the car.”

Up in the front seats, Koulas found two matching holes on the floor of the driver and passenger side. How the rats got past the steel undercarriage is still a mystery. Then he noticed the rat shit. Then he ran. 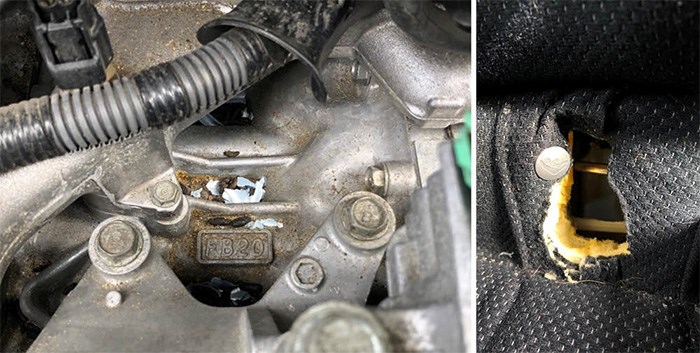 After noticing holes in the seats of his Subaru (right), Christos Koulas has employed rat traps and his dog Daisy in his rat-ridding efforts, so far to no avail. – Christos Koulas photos

As humans learned during the Plague, rats carry diseases. Luckily, most of the ickies rats carry these days would only be transferable to humans if your open wound came into contact with a rat’s urine or feces. As disgustingly remote as that sounds, if you add small children into the mix, it’s incredible how much the chances of this actually happening increases.

By a great stroke of coincidence, the Koulas family just happens to own a feisty dachshund named Daisy, who just happens to belong to a long line of wiener dogs bred to hate and hunt rats. Koulas and his wife let Daisy loose into the car and shouted encouragement from the safety of their driveway.

Sure enough, nose to carpet and yipping wildly, Daisy frantically followed the rat’s trail from the hole on the floor up to the kids’ seats and back again, but came up rat-less. Koulas then rushed to the hardware store for another defense. He wisely avoided rat poison (you should always too, unless you enjoy poisoning eagles, owls and your pets) and opted for large, heavy-duty, old-school, spring-coiled rat traps. He set them up on the floor of the car. The traps haven’t caught anything, either.

“Yeah, the scary thing is I’ve hopped in the car to go to work and I’ve forgotten that the traps are in there, but luckily no accidents yet,” says Koulas. He is so determined to catch the rats that he’s considering camping inside the car, which has sustained what he estimates to be roughly $3 to $5,000 dollars in rat carnage.

The good news is ICBC covers rat infestations… if you have comprehensive insurance. In the meantime, if rats are indeed — shudder — in your car, mechanic Rob Shard suggests to keep moving your parking location, don’t park alongside a building, keep food stuff out of the car and cover your engine and car with strong, clean scents. “Scented soap, dryer sheets, stuff like that repels rats. They don’t like clean places. They’re filthy little buggers, eh?”