OPINION: Meet the local politics blogger who might tell you to "F**k off" if you ask a question

I recently had an interesting exchange with a Vancouver politics blogger which would have caused someone new to the toxicity of #vanpoli to run away screaming.

I recently had an interesting exchange with a Vancouver politics blogger which would have caused someone new to the toxicity of #vanpoli to run away screaming.

The Van Ramblings blog is written by Raymond Tomlin, a man who describes himself as a "veteran journalist and educator".

Our brief... er... conversation started when I tweeted a link to a blog post he just wrote about MLA David Eby. I wondered aloud if this blog post in which he heaps on a hilarious amount of praise, calling the politician "probably B.C.'s single hardest working MLA", was satire.

I truly wasn't sure if it was one of those pieces where someone "praises" a politician sarcastically to dump on them or not. It just seemed way over the top.

Here's the answer I got, right before he blocked me: 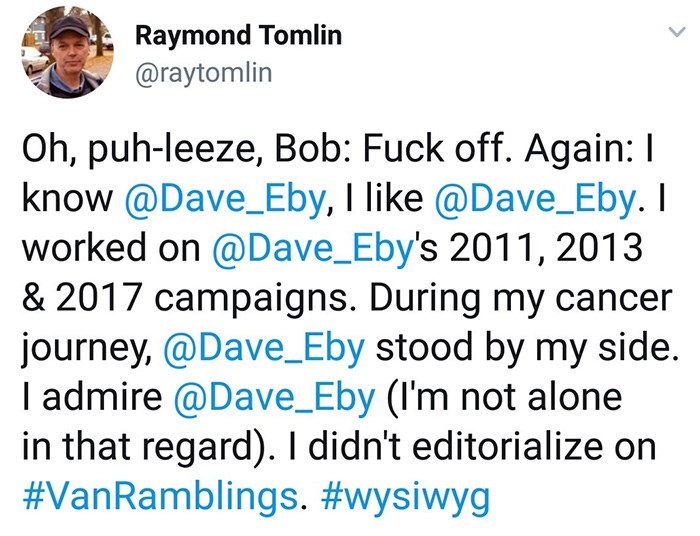 So it seems that no, it wasn't satire. And Ray seems to think that it was simply a piece of fact-based journalism, with no editorializing (adding a personal opinion) on his part.

Below is the first paragraph of Ray's blog in question. I've taken a great deal of time to comb through it and bold all of the parts I feel are editorialized:

"David Eby, British Columbia's Minister of Justice and Attorney General — the latter portfolio making Cabinet Minister David Eby, the Minister Responsible for the administration of our criminal justice system in British Columbia, including family law, court services, gaming policy and enforcement, liquor control and licensing, and the British Columbia Lottery Corporation — in his role on the government's Executive Council, Minister David Eby also the Minister Responsible for ICBC, BC Ferries and the BC Human Rights Tribunal ... well, as you can see, it's all la-di-da for Minister Eby, not busy at all, not a whole lot on his plate, gosh its a good thing he needs only three hours sleep a night ... and did I mention what a good and moral and principled man Mr. Eby is, and that he is kind and generous of his time, and probably B.C.'s single hardest working MLA, most sensitive to the needs of his constituents — with an almost beyond belief coterie of constituency assistants, competent, passionate, informed, their lives almost solely dedicated to serving the needs of those of us who live in Kitsilano, or the Point Grey neighbourhood on the west side of Vancouver, and out at the University of British Columbia and the University Endowment Lands."

Sure he told me to f**k off and blocked me but I'll chalk that up to Twitter being what it is (mostly awful). The thing is, I want you to read this guy's Ramblings (a proper title if I ever saw one).

Contrary to what he might believe his writing is mostly editorialized. However even if you don't agree with his opinions [raising hand emoji] he somehow has insights on local politics that most working in local mainstream media don't. Or at least he shares stuff he finds out more than others would be able to.

I've been told by insiders that this piece about the NPA's leadership race has gotten as close to the truth as anything written so far. Sometimes the guy nails it.

While you'll have to trudge through about 25,000 words per week to find the good stuff and you will definitely, definitely, definitely be exposed to a large amount of editorializing on Ray's part, VanRamblings.com is worth taking a look at leading up to the Vancouver election happening October 20th, 2018.

- With Vision Vancouver "in freefall", other parties will handily fill the vacuum