Opinion: Good luck trying to rent a Vancouver mansion with your buddies

Landlords allowing large groups of students or young professionals to share these homes is the exception rather than the rule. Most landlords are looking specifically for a family to rent larger homes.
0
Mar 11, 2019 2:25 PM By: Joannah Connolly

Those of you who follow real estate and housing stories in the Metro Vancouver media will likely have seen a host of articles over the weekend about a flood of large homes coming on the rental market, and being rented for cheap by groups of young people.

The influx of luxury rentals is certainly a trend, and one that we reported on months ago. It’s partly due to new taxes – both the provincial Speculation and Vacant Homes Tax and, in the City of Vancouver, the Empty Homes Tax – doing their job and pushing otherwise-empty houses into the rental pool. 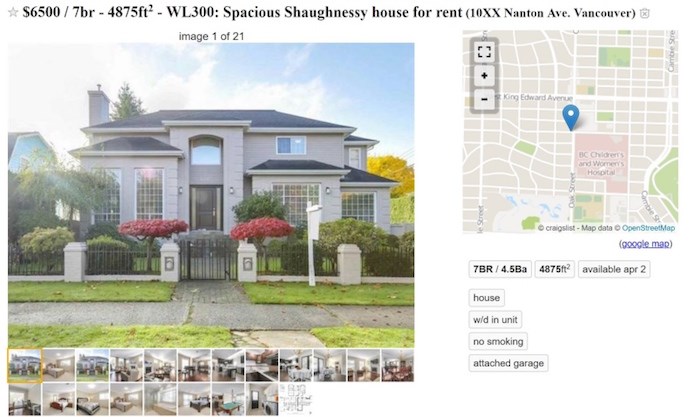 It’s also partly due to the slowdown in sales at the high end of the market, which means that owners who need to move on, but can’t sell their property (or don’t want to sell in this market) are renting it out instead.

Now, media outlets all over town are reporting on how groups of students can rent these homes, splitting such rents as $12,000 for an eight-bedroom luxury mansion between 13 people, at less than a grand a month each.

But that’s great, right? All these five-bedroom-plus houses that would have been either left empty or sold to wealthy buyers are now available for rent, in a market that’s desperately tight, expensive and excludes young and low-income renters.

Well, sure. The fresh rental inventory of such homes is great for families who need five or more bedrooms and can afford the $5,000-plus-a-month prices.

But landlords allowing large groups of students or young professionals to share these homes is the exception rather than the rule. I reached out to numerous Craigslist advertisers currently seeking tenants for five-bed-plus luxury houses in Metro Vancouver, asking if they would be willing to rent to a group of young people. Every single one who got back to me said absolutely not – they’re looking for a family. Some of the advertisements even specify that they’re looking for a family only.

It’s tough on the groups who need cheap accommodation, but I can’t say that I blame the landlords. In the UK, where I’m from, groups of young people or grad students sharing a large house is much more common than in Canada – I did it for many years in London. And there’s no doubt that even relatively well-behaved tenant groups will create much more wear and tear than the average family. Plus it’s much higher risk that at least one of the group will be less than well behaved, and that parties will happen. No property owner wants their house trashed by tenants.

However, it’s possible those landlords might have to give up some control, and either lower their prices considerably, or start allowing groups. Yes, the rental market is tight overall, but that’s largely for one- and two-bedroom apartments, or smaller houses. Not many families can afford the kinds of rents that these large, luxury houses are usually listed at – and it looks like rental prices are coming down accordingly.

I don’t know how many groups of young professionals or students will benefit from the influx of large homes on the rental market. But let’s hope, at the very least, that lots of families end up getting a much-needed good deal.