OPINION: Rio Theatre's $375,000 arts grant may be in jeopardy after 'sports bar' stunt

The primary condition of the City of Vancouver's 2018 grant was that they remain a "cinema and live entertainment venue"
Jan 23, 2021 11:00 PM By: Bob Kronbauer 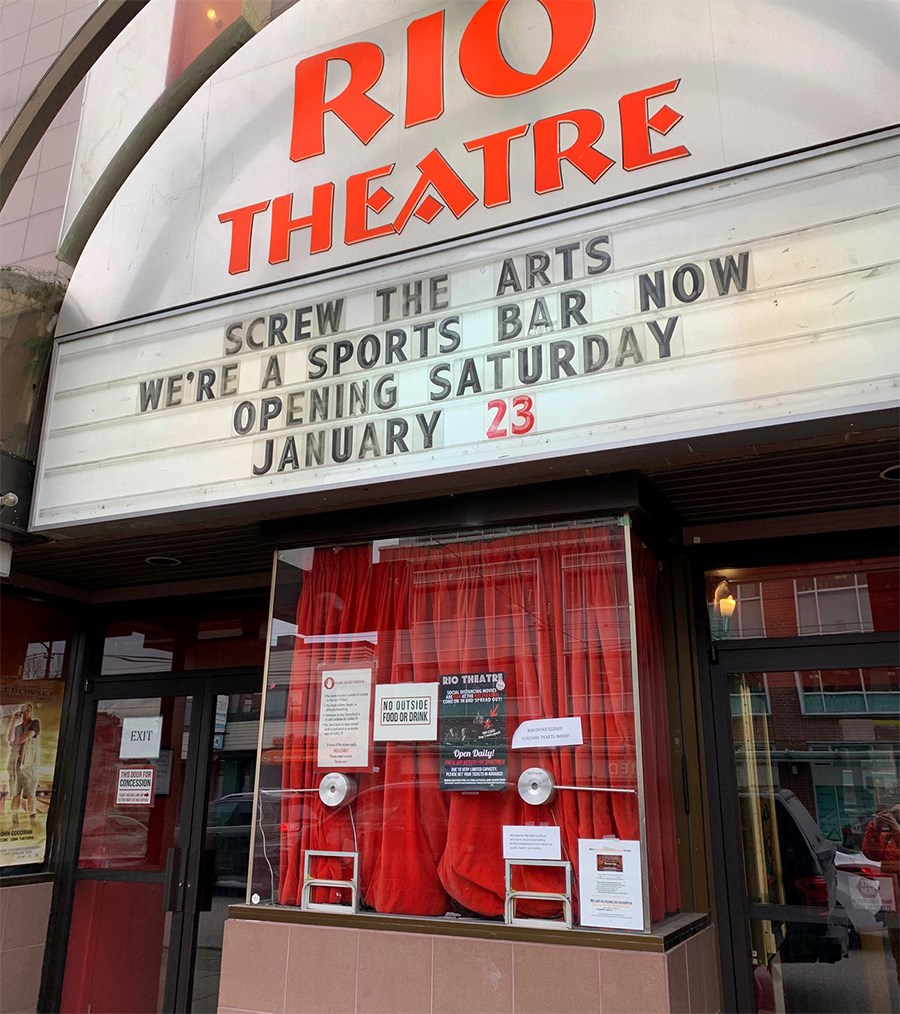 This week, the Rio Theatre launched its most audacious publicity stunt to date, yet in doing so may have actually put the establishment's finances in further jeopardy than they already are.

Turning the theatre into a sports bar to skirt the COVID-19 restrictions put on theatres in B.C. got the theatre nearly as much press as they received in 2012, when they leveraged local media coverage to pressure the government into issuing them a liquor license.

Nearly a decade ago now, the City of Vancouver wound up urging the province to step in and, after a protracted 4-month-long saga, they issued a liquor primary to the business running out of the heritage property. The province also wound up changing the liquor laws for all those who follow in the Rio's footsteps.

Inviting patrons in to "catch the big fight" this week has netted almost as much press as their 2018 "Save the Rio" campaign to raise money to buy the building they occupy, and help ensure their long-term survival. That effort was a huge success, partly thanks to celebrity endorsements from the likes of Ryan Reynolds, Kevin Smith, and Seth Rogen.

The "sports bar" pivot they made this week was a stunt for the ages, and it has managed to catch the attention of the government as they had intended it to, but it doesn't come without risk.

Back in 2018, in order to help "Save the Rio", Vancouver City Council made a rare move and approved a $375,000 conditional grant to help purchase the building and save the privately-held theatre business that runs out of it. It was part of their Making Space for Art: 2018 Cultural Infrastructure Plan, which was meant to help "preserve existing private spaces such as music and film venues".

The grant was part of a complicated plan involving unnamed private investors, a crowdsourced investing campaign, more than $500,000 in donations from the community, and a non-profit organization (the Vancouver Art House Society) which was set up with the explicit purpose of facilitating the deal.

The grant came with a few conditions, one being that they had to raise enough money to match the funds (which they did, and then some) and another that they ensure affordable access for other non-profit organizers (which they also did, in the form of a Community Use Agreement).

According to a July 24, 2018 report given to City Council, authored by Sandra Singh—the City of Vancouver's General Manager Arts, Culture and Community Services—the primary condition was that the venue be used "specifically as a cinema and live entertainment venue, for at least 10 years" after they received the cash.

Further, "If there is a change of use of the property, in whole or in part, within 10 years of receiving the grant, staff will negotiate for a full repayment of the grant with interest."

Sports bars aren't considered "cinema and live entertainment venue[s]," so we reached out to the City to see if the Rio had communicated with them prior to flipping the script. Apparently, they did not.

A representative from the City tells us that "City staff are aware of the news articles that have been circulating and are looking into this before assessing and determining next steps."

They also made a point of letting us know that "The approved municipal land use for the Rio is for a ‘theatre’."

Desperate times call for desperate measures, and the COVID-19 pandemic has caused a lot of protocols to be thrown out the window.

Nobody wants to see the Rio Theatre have to repay $375,000 for getting creative and trying to stay afloat during a crisis—and getting the government's attention by way of a ton of publicity—but it would appear that they've broken the main condition of their grant, which came from public money.

We've reached out to the Rio Theatre for comment, but they have so far not responded to our request.

The Rio Theatre has claimed that we did not reach out for comment. However, we reached out to them yesterday morning and gave them 12 hours to provide a comment, at which point we published this story.

They have since responded to our original request for comment. Their CEO Corinne Lea writes "All I have to say is that we are living in unprecedented times and The Rio is doing what we can to survive. I think your line of query into this level of detail is completely tone deaf and insensitive to the crisis the arts is facing."

Opinion: British Columbia must do better for women struggling with addiction
Feb 28, 2021 1:09 PM