Comment: The science is in — salmon farms need to be out 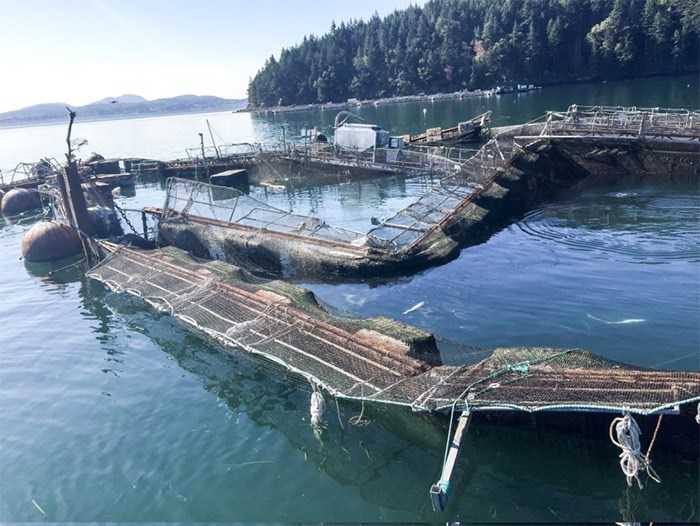 Over the years, public outrages associated with this industry have unfolded like so many layers of a rotten onion: sea lice, viruses, organic pollution, 10 times the carcinogens in the flesh of farmed salmon versus wild, legal shooting of seal and sea lion “pests,” whales entangled in nets and anchor lines — and the list goes on. This is all unfolding against a backdrop of vehement objections from First Nations.

Despite overwhelming scientific evidence of ecological and social destruction, decision-makers in Victoria and Ottawa have remained shamefully silent for decades. Is it any wonder First Nations feel the only way to make their voices heard is through direct action with members entering their third month of occupation of a B.C. farm? But before these and other serious issues cameto light, the escape of farm salmon into the wild was the first to galvanize public opposition to this deeply flawed industry.

On the East Coast, farm-escaped Atlantic salmon freely hybridize with endangered wild Atlantic salmon. In so doing, they obliterate what little remains of 10,000 years of wild genetic diversity.

Such biodiversity was the raw material of adaptation and evolution, and its loss greatly increases the likelihood of wild Atlantic salmon succumbing to the threat of rapid climate change. This prediction appears to be coming to fruition most obviously in New Brunswick’s Magaguadavic River where only farm-escaped salmon, not wild salmon, are ascending to spawn this fall.

In B.C., where the majority of Canadian farmed salmon is produced (nearly all Atlantic salmon), escapees successfully reproduce in coastal rivers. So numerous are escapees that the hunt for a same-species mate appears easily accomplished. The threat of colonization and the panoply of ensuing negative effects is ever present. Indeed, it might well be underway, since as we have recently learned, the utter absence of oversight in the vast majority of West Coast rivers has rendered fisheries managers blind to such potential events.

The mental images of hundreds of thousands of potentially invasive salmon invading B.C. has struck a chord and reinvigorated the escapes debate. However, focusing exclusively on the fate of these particular fish and the myriad effects they might unleash misses the point. Escapes — like all of the other issues — are simply the consequence of farming salmon as cheaply as regulatory authorities will allow.

Indeed, the link between profitability and ecological damage is well documented throughout the industrial fish-farming world. As long as profit is the exclusive driver of policy, the race to the bottom means that the needs of our ecological and social systems will fall by the wayside.

For instance, escapes do not have to happen, it is just that 100 per cent containment costs more than the escaped fish are worth, so there is profit in leaky farms. As the value of salmon declines — the result of global overproduction — the profitability of escapes increases. So long as regulators prioritize private industry profits over environmental health and public interest, we can expect more of the same.

And who profits? The great majority of farms operating in Canada are Norwegian-based, greatly diminishing the industry’s contribution to the Canadian economy.

An ironic twist to the Washington state escape story is that technology developed on Vancouver Island renders old-tech open-net pens obsolete. Land-based recirculating systems entirely remove farm salmon — along with all of their environmental baggage — from the ocean. This technology is rapidly being adopted all over the world — profitably.

This advancement not only eliminates virtually every environmental issue associated with conventional farmed salmon, but also delivers significant benefits. Animal welfare is improved (fish are not harassed by predators day and night), while the embedded carbon footprint declines precipitously.

A key market advantage of farmed salmon is that it is available fresh all year. Given that coastal farms might be thousands of kilometres from major markets, air freight is the norm. Thus, 95 per cent of farmed salmon’s carbon footprint is in transportation, not production. Farming salmon near major markets therefore comes with a significant carbon reduction, in addition to neutralizing the menacing array of environmental damages.

Across the globe, this made-in-Canada technology is revolutionizing aquaculture, everywhere but in Canada. It is high time decision-makers make good on promises to regulate salmon farming to maximize benefit to all Canadians, not just foreign-based conglomerates.

Salmon farming in Canada is at a crossroads. Either we can leverage the potential of our own ingenuity and lead the world in a new Blue Revolution or we can stay the course of flawed economics and political cowardice, and destroy our oceans.

John Volpe is an associate professor in the School Of Environmental Studies at the University of Victoria.

Survey: Measuring the integration of metrification across the country
Aug 12, 2022 12:00 PM