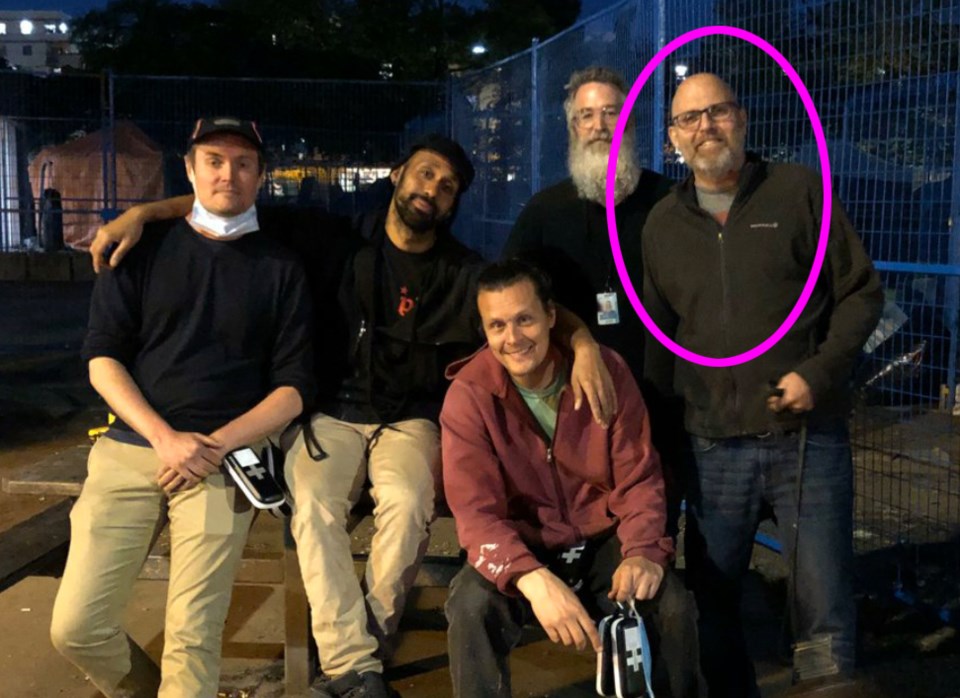 While Friday afternoons often bear press releases from governments looking to bury unpopular news, that evening has also been known to provide other eyebrow-raising "announcements"; social media posts from government employees and elected officials not on the clock.

This past Friday brought one of those posts when BC Housing CEO Shayne Ramsay decided to tweet a photograph of himself, his dog Freddy, and four other men who were clearly not practicing physical distancing.

The tweet and a couple of followup notes were later deleted, with no explanation, after being widely derided. 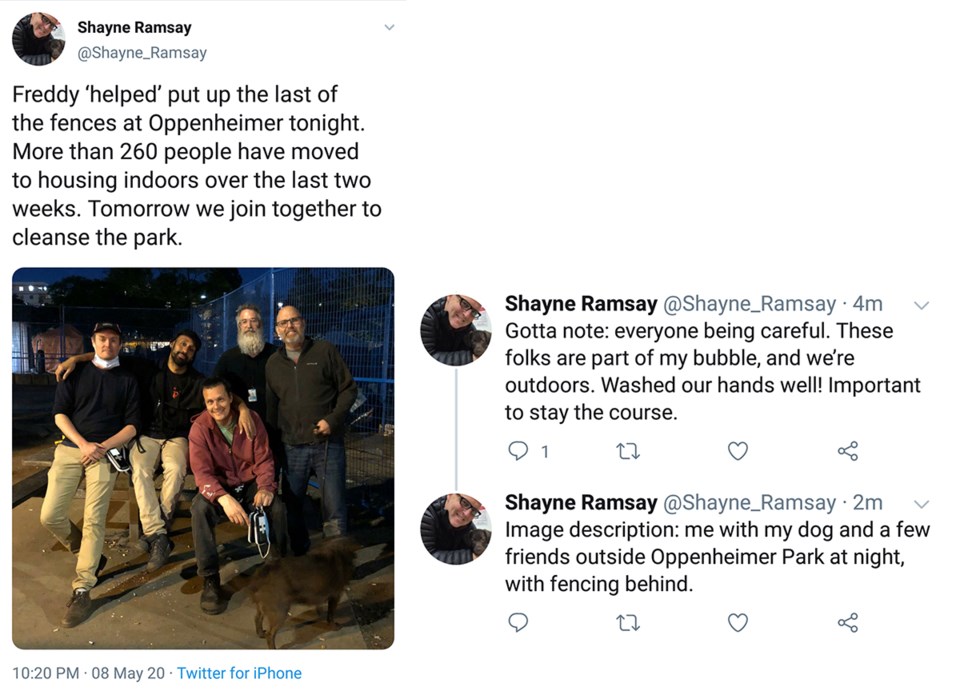 The high-ranking government employee who was paid $364,949 of your tax dollars in 2019 had a lot to celebrate that night.

His agency had finally managed to get most everyone living in Oppenheimer park into housing after many months of the City and the Park Board wringing their hands and playing politics.

Oppenheimer is now empty of residents, fenced off, and most of the people who were living in tents there are thankfully housed, thanks to a ton of work done by Mr. Ramsay's agency and the provincial government.

His celebratory 10:20 p.m. tweet was seemingly meant as a thank you to hardworking staff, as he jokingly let the public know that his dog (who was in the photo) 'helped' put up fences around the park.

However, for a lot people who saw it, it wasn't funny. It hit a raw nerve.

Almost every resident of this province has done their best to lock down, only go out for groceries once a week while wearing a mask, wash their hands often, stay inside, and remain almost completely shut off from actual human contact with our friends beyond phone and video calls.

We've been huddled in our homes for the past two months, heeding Dr. Bonnie Henry's words about practicing physical distancing.

Meanwhile, the head of a government agency is out whooping it up in close proximity to people who are obviously not his family/bubble, while simultaneously telling us that it's "Important to stay the course."

You don't want to hear the words that I uttered out loud when I first saw Mr. Ramsay's tweets.

Luckily for you, there are others in B.C.'s media who are more eloquent than I am.

One of those people is NEWS1130's legislative reporter, Liza Yuzda. She tweeted, "Days are long, stress is immense, but it seems reasonable the BC Housing CEO, responsible for keeping many of BCs most vulnerable safe, should be modelling 100% all-in behaviour PHO/Adrian Dix asks of BCers not bending the rules, like in these now-deleted tweets."

I sent BC Housing some questions about the circumstances behind the photo, as well as physical distancing within their organization, and this morning they were answered in a prepared statement by Mr. Ramsay.

In it, he explains, "I was walking my dog and stopped, as I often do, to talk with the outreach team that had just wrapped up their work for the day. As I was thanking the team for their hard work, we got caught up in the moment and stepped in close to each other to pose for a photo. This was a mistake, and I want to apologize for not following physical distancing guidelines. I also shared this photo on my Twitter account. In the morning, I removed the photo because I wanted to ensure that I was not encouraging unsafe practices."

So his followup tweet (shown above) about the people pictured being in his "bubble" would appear to contain a lie, made up on the fly in an attempt to try to cover up an obvious flub on his part, or he doesn't grasp the very clear definition of a bubble that Dr. Bonnie Henry has described over and over again.

His poor judgement aside, the most important thing you need to know is that BC Housing is actually sharing a lot of COVID-19 safety messaging (beyond their CEO's Twitter stream) with their employees who work with the province's most vulnerable residents.

He also says they've had physical distancing measures in place since March 14th, that "our protocols align with the PHO guidance for social service providers regarding masks and PPE, hand hygiene, cleaning and disinfecting, and self-isolation protocols," and that there's a robust resource for employees on their website.

There are two pages about "social distancing" in BC Housing's 31-page COVID-19 Operations Manual.

Mr. Ramsay might be well-advised to re-read them, and perhaps make this illustration on Page 14 the wallpaper on his phone for the next time he's out walking his dog. 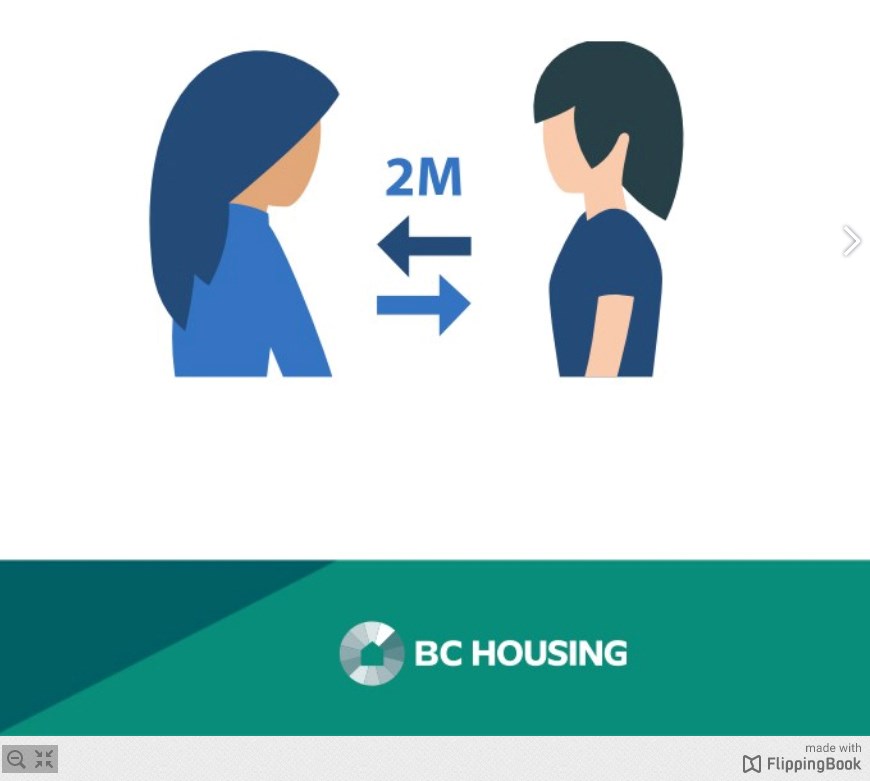 A history lesson from Vancouver's H.Y. Louie: kindness and charity overcome all
May 28, 2020 3:08 PM
Comments
We welcome your feedback and encourage you to share your thoughts. We ask that you be respectful of others and their points of view, refrain from personal attacks and stay on topic. To learn about our commenting policies and how we moderate, please read our Community Guidelines.