It is outrageous that TransLink, Transit Police and Kennedy Stewart, the new mayor of Vancouver, have been taking to social media in stunning public relations campaigns crowing about the growing dystopian nightmare that is Metro Vancouver's transit system.
Burnaby Now Nov 22, 2018 4:18 PM

It is outrageous that TransLink, Transit Police and Kennedy Stewart, the new mayor of Vancouver, have been taking to social media in stunning public relations campaigns crowing about the growing dystopian nightmare that is Metro Vancouver's transit system.

The unseemly bragging about the region's increasing ridership, "buses, ridership jumped 10.5 per cent with 24.45 million boardings, while on the Expo/Millennium line, ridership went up 7.7 per cent. Canada Line boardings rose seven per cent" is off-base and distasteful considering the terrible reality and experience most commuters are having these days. 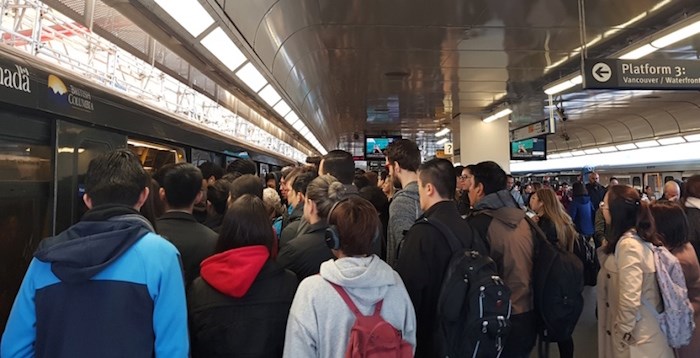 For over a year, I have regularly been using social media to send pictures of the hellish daily commute on SkyTrain … I have been particularly highlighting the escalating public safety risks due to overcrowding, and the ongoing failures to increase service levels on SkyTrain, and the attendant problems this is bringing to the region.

I have repeatedly outlined how physical aggression and violence are becoming normed on SkyTrain here. This is particularly experienced by female commuters, some of whom are being physically and sexually assaulted on transit. This is happening much more than anyone is aware. Sometimes women don't even know who is assaulting them because of the overcrowded conditions, so they don't report, even if they know how to, as this information is far from well communicated.

Many commuters in Metro Vancouver now think nothing of pushing or shoving people into, or off of trains, or across the yellow safety line in front of the track. All of these things have happened to me, and I see these things every day on my commute. So does SkyTrain and SkyTrain “control" from the safety of their ivory towers. If someone were to push, or shove, a stranger on the street this would be considered an assault under the Criminal Code of Canada. On transit, this has become just a normal experience on one's commute, and something we will witness over and over, lowering the bar further on what is acceptable social behaviour in public spaces.

Many commuters refuse to move, or let people on, or off, the SkyTrain and people often have to push their way off trains to exit, because other commuters block the doors. All of this happening under the eyes of SkyTrain attendants at the stations, and while Transit Police members concentrate on handing out tickets, rather than standing upstairs to keep an eye out on a crowd-control disaster. It will only be a matter of time before someone is pushed, or trips and falls onto the tracks as hundreds of people surge toward the trains over and over throughout rush hours.

People without a shred of empathy, or compassion selfishly ignore frail seniors and people with disabilities who need the seats set aside for them for safe transportation, leaving fragile and vulnerable people to stand and hold on for dear life, literally.

Transit infrastructure in Metro Vancouver is now overcapacity and is not being properly managed throughout the region. That is the real story of increased ridership.

There isn't even the remotest indication that any level of government cares, or is doing anything about any of this, except using PR campaigns and political gaslighting to create the illusion that ever-increasing ridership is a good thing. All of this smoke and mirrors game while service levels are maxed out, and overcrowding risks to public safety continue to escalate and become normalized here, quickly making Vancouver the dystopian capital of Canada.