The City might be installing $10,000 worth of standing desks for our local politicians

When City Council reconvened after a quick summer break, Councillor Sarah Kirby-Yung had a surprise waiting for her on her desk in the Council chamber. It was... a desk.
0
Sep 18, 2019 9:36 AM By: Bob Kronbauer

When City Council reconvened after a quick summer break, Councillor Sarah Kirby-Yung had a surprise waiting for her on her desk in the Council chamber.

Perched atop her existing oak desktop in the Council chamber was a brand new Quickstand Eco model of standing desk.

Manufactured by New York-based Humanscale, it's described as transforming "ordinary desktops into healthy, active workspaces" by allowing the person sitting at the desk to lift it up and be able to stand and work when they feel like it. 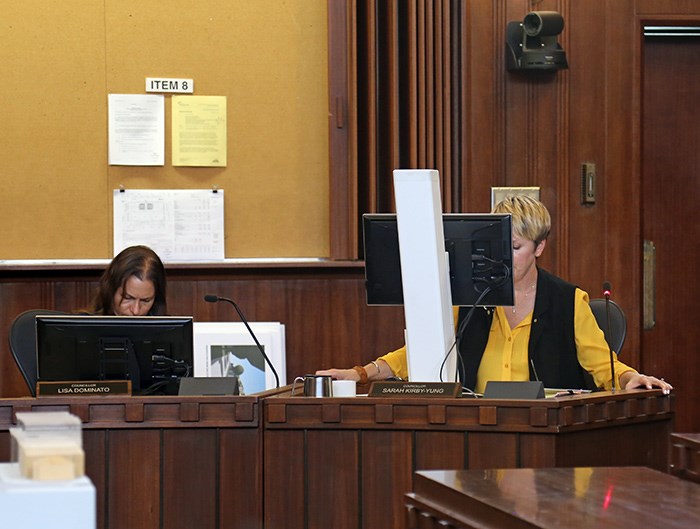 City Councillor Sarah Kirby-Yung sits at the new standing desk installed on her desk in the Council chamber at City Hall in Vancouver. Photo Bob Kronbauer

The City refers to the thing as a "sit stand", and in an email they tell me it was installed the week of September 3rd.

The plan is to pilot this one for a few weeks then perhaps add them to all of the councillors' desks.

If you've ever watched a Council meeting or a public hearing, you'll have noticed that the only person who seems to enjoy a "healthy, active workspace" is councillor Jean Swanson.

Between furious bouts of knitting (which I'll do a column about in the future) Swanson spends a fair bit of time pacing behind her desk and the desks of other councillors.

I assume she does it to keep the blood moving during marathon public hearings and drawn out meetings where amendments are made to amendments to amendments on motions.

Jean Swanson's choice to move around in the middle of public hearings is a source of endless gif material pic.twitter.com/y37hercZd7

When I asked Kirby-Yung about it she expressed surprise that she had a new desk on her desk. She mentioned that they sit in long meetings, and that it would be nice to be able to choose to sit or stand during them.

From the public's (and this columnist's) view, they visually get in the way of us seeing the councillors - on the video live stream of meetings as well as when you're sitting there in the chamber. If all ten councillors had them on their desks it might also make it difficult for them to see each other as they're debating motions.

Hence it being a pilot. Maybe it'll work out, maybe it won't.

If sitting is the new smoking, then these standing desks are the equivalent to vaping. We're not sure what their future will hold for them in the chamber, but if you ask me it's a worthy expenditure to keep our elected officials healthy.

This is Vancouver's Stupidest Politics Column. Reach the archive HERE.