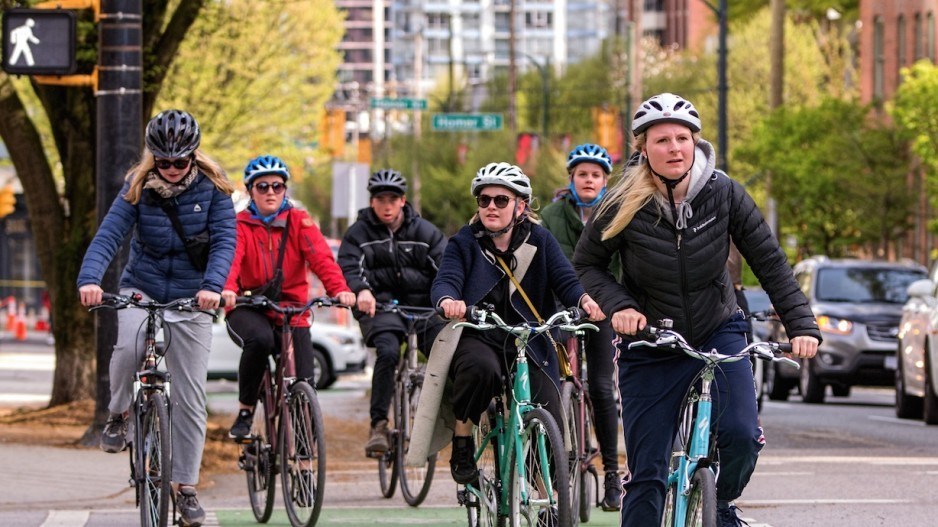 More than three in five residents (64%) say they support having separated bike lanes in the city | Chung Chow/BIV files
Just over 12 years ago, Vancouverites who drove downtown first found out that some of the parking spaces they relied upon would disappear and give way to new cycling infrastructure. At the time, affected drivers responded with rage on what was then the preferred outlet for dismay: the call-in radio show.

Over the past few months, discussions about the installation of a temporary bike lane on Park Drive in Stanley Park have taken place on what is now the preferred outlet for dismay: social media. We have seen endless threads explaining the benefits and drawbacks of the proposal, as well as analyses of which groups would benefit, or suffer, if this plan was put in place on a semi-regular basis.

When Research Co. and Glacier Media asked Vancouverites about this topic, overall views on cycling infrastructure did not go through a severe shift. This month, more than three in five residents (64%) say they support having separated bike lanes in the city, while 28% are opposed and 9% are undecided.

The latest findings represent a five-point drop in support since our November 2019 survey, as well as a three-point increase in opposition. Still, residents of Vancouver who favour this infrastructure continue to outnumber decriers by a two-to-one margin.

Vancouverites of all age groups support separated bike lanes, including 65% of those aged 18 to 34, 63% of those aged 35 to 54 and 60% of those aged 55 and over. On this matter, we do not see the radical fluctuations from generation to generation that permeate debate about other municipal issues, such as taxation or housing.

As far as geographic location is concerned, Vancouverites who live downtown hold the highest level of support for separated bike lanes at 71%. The numbers are not particularly low among those who live east of Main Street (59%) or west of Main Street (62%). In addition, sizable majorities of Vancouverites of European (68%), South Asian (65%) and East Asian origins (58%) are in favour.

For years, some drivers have criticized the creation and maintenance of separated bike lanes. In this latest poll, 58% of Vancouverites who commute by car support the concept, with opposition reaching 35%. As expected, cycling infrastructure is more popular among those who go to school or work using public transit (77%) or their bicycles (75%).

There is also little movement when Vancouverites are asked to ponder what to do next. We continue to see two in five residents (41%, up one point since 2019) believing that the city currently has the right number of separated bike lanes. Conversely, 28% (down two points) consider that some of the lanes should be removed, while 22% (up one point) would like to add more.

Similar proportions of drivers (36%) and cyclists (39%) believe Vancouver has reached a good balance on this matter, but this does not mean that polarization is absent. We see 37% of Vancouverites who commute in their cars saying that we have too many bike lanes, and 39% of those who cycle to school or work claiming that there are not enough.

When we asked the city’s residents about the Vancouver Park Board’s decision to approve a temporary bike lane on Park Drive in Stanley Park until the end of October 2021, the factions are also well defined. Almost three in five respondents (59%) consider this a “very good” or “good” idea, while 29% deem it “bad” or “very bad.”

Support for the temporary bike lane in Stanley Park is highest among women (62%), people aged 18 to 34 (67%) and those who live downtown (64%). The analysis of Vancouverites aged 55 and over is more nuanced, with 47% supporting the plan and 40% opposing it.

As expected, the city’s residents who cycle to school or work are dramatically in favour of the new temporary bike lane (79%), along with 75% of those who rely on public transit on weekdays. A majority of drivers (53%) believe that this is a “good idea”, while 35% do not.

As time goes by, it will continue to be important to measure the views of Vancouver residents on cycling infrastructure. At this point, supporters of the concept continue to outrank opponents, even on the seemingly thorny issue of Stanley Park.