Svend Robinson has made it official – he’s running again for elected office in Burnaby North-Seymour for the federal NDP after so many years away.
Jan 16, 2019 7:26 AM By: Chris Campbell

Svend Robinson has made it official – he’s running again for elected office in Burnaby North-Seymour for the federal NDP after so many years away. 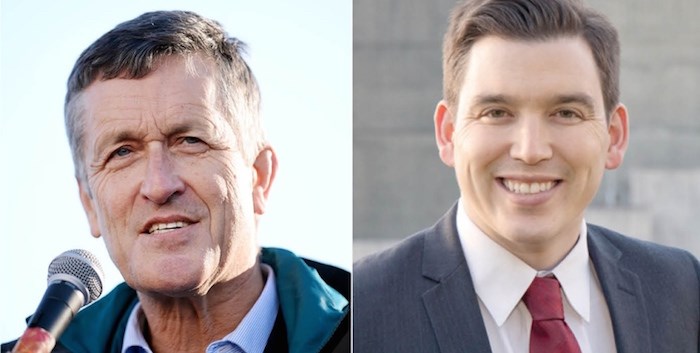 I don’t use those words carelessly. I’m not big on hyperbole, but the more I thought about it, the more I came to this conclusion.

Think about it. On one side is Robinson, one of the most intelligent, charismatic and skilled politicians Canada has ever produced. He’s utterly fearless when it comes to taking stands on issues.

How fearless? He once heckled U.S. President Ronald Reagan, who was speaking in the House of Commons (He shouted, “Stop Star Wars now” – no, he wasn’t against Han Solo, he was against American disarmament policies). He helped lead the movement for the right to physician-assisted death. He blocked logging trucks in Clayoquot Sound. Oh, and he's also the first openly gay MP in Canadian history - something he announced at a time when most of the world's politicians stayed in the closet.

It’s that fearlessness and his refusal to hedge his comments to soften their blow that makes him so polarizing.

Facing off against Robinson is incumbent Liberal MP Terry Beech.

Do. Not. Underestimate. Terry. Beech.

Some people seem to think that because Beech represents a community in which the Trans Mountain pipeline expansion project is proposed to run through that he’s a dead man walking.

I don’t buy it. Beech, like Robinson, is intelligent, charismatic and skilled when it comes to politics. He’s pretty sharp and has worked his tail off to engage with his constituents.

Late last year, Beech was awarded MacLean’s magazine’s Parliamentarian of the Year for Civic Outreach because of the work he’s put in engaging local residents. It’s partly due to necessity because Beech realizes there are a lot of people here who don’t want the pipeline (although not as many people as most assume).

Beech, too, is fearless. There’s been numerous angry protests staged outside of his Hastings constituency office. Unlike a lot of politicians, however, Beech doesn’t hide in his office. He actually goes out and speaks to the protesters. Some of them have told the NOW that they respect Beech for that, even if they don’t like the party’s policies on this file.

I’m dreaming of how Robinson and Beech will spar on the campaign trail and – fingers crossed – hope for at least one public debate.

Look, I don’t know who will win this riding. It’s still a long way off.

These two aren’t the only candidates, of course.

Green candidate Amita Kuttner is smart - she's an astrophysicist - hard-working and passionate about her opposition to the pipeline, in part due to the death of her mother in North Vancouver in a 2005 mudslide.

In the years since that tragedy, Kuttner has been an advocate fighting climate change – which she connects to her mother’s death due to the heavy rains that preceded the mudslide – and she sees the TM pipeline as a threat to be stopped.

Beech will be in tough because I imagine Kuttner and Robinson will both pillor the Liberals over the pipeline.

As for the Conservatives, we’ll see who is nominated.

But I don’t see anyone else providing the kind of wattage that Robinson and Beech will produce during an election campaign, which could see an appearance by the prime minister.

Things are just starting. Expect a lot of heat in this riding - most of it focused on Beech and his government's purchase of the pipeline. Just wait for the manure to hit the fan when the National Energy Board submits its recommendations in the coming months.

Oh baby. I got goosebumps.