While Justin Trudeau and the Liberal Party of Canada are desperate for the media to move on from the blackface/brownface controversy that erupted last week they seemingly can't help but perpetuate it using their own channels.
0
Sep 24, 2019 8:47 AM By: Bob Kronbauer

While Justin Trudeau and the Liberal Party of Canada are desperate for the media to move on from the blackface/brownface controversy that erupted last week they seemingly can't help but perpetuate it using their own channels.

They've moved past apologizing and explaining, with Trudeau now actively dodging questions from reporters about the issue and repeating the line that he will "continue to be open with Canadians".

Amongst the party's attempts to put it behind them, this columnist found it curious that the advertisement below popped up in my Facebook feed on Monday.

Yes, that's a black-painted coffee mug with "#TeamTrudeau" printed on it. It's Sponsored, meaning the Liberals are putting money behind promoting it.

How does something like this make it past the many filters that the campaign must surely have in place? My fictionalized account of what might have happened is below. 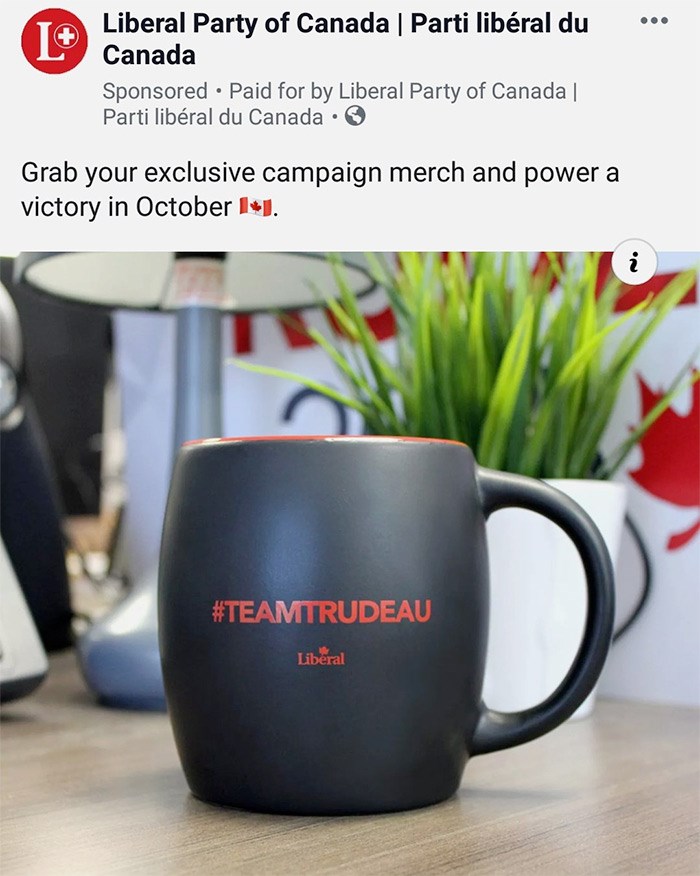 Paid promotion for a #TeamTrudeau mug, as seen on Facebook. Screengrab

TRUDEAU: Man it's good to see your face every day, bro.

BUTTS: [SMILES] Well today I brought you a gift, my man! [OPENS BOX AND PULLS OUT A MUG] Mugs! The middle class love mugs! Tim Hortons and Canadiana and all that sh*t, you know? They all drink coffee, and soon they'll be drinking it out of our mugs, dude!

[TRUDEAU HOLDS HIS CHIN AND STARES LONG AND HARD AT THE MUG IN BUTTS' HAND, SCRUTINIZING IT, PURSING HIS LIPS]

VOLUNTEER: Pardon me, Mr Prime Minister. If I may?

TRUDEAU: Call me Justin, dammit! [SMILES WHILE VIGOROUSLY PATTING VOLUNTEER ON THE BACK] We're a team here.

VOLUNTEER: Ok, uh, Justin... well... d-do you think maybe people might look at these and be reminded - even subconsciously - of the blackface stuff? I mean, like, the whole thing is painted black except for the... well... the mouth part... it's red... and I mean... in any other context it might be okay but today it feels kinda... minstrel-y.

[BUTTS LETS OUT A GASP, CLUTCHING THE MUG TO HIS HEART AS IF THEY'VE BOTH BEEN BROKEN BY THE VOLUNTEER'S WORDS]

BUTTS: [SHAKING] How dare you!

TRUDEAU: Relax, Buttsy, we're all adults. And remember, as Liberals we always own up to our mistakes; I've been saying that I do for the past week. This young man made a mistake by saying something racist about your mugs. He didn't realize it at the time, but I'm sure he does now that we've caught him doing it and pointed it out. Now, what is it that you do around here, son?

TRUDEAU: Perfect! Apologize to Buttsy here then go post these to Facebook and see if we might be able to drum up some good press this week, and some new donors. And be sure to put a big ad budget behind these babies so nobody misses them.

This is Vancouver' Stupidest Politics Column. Read the archive HERE.