Opinion: In praise of the best diner in Vancouver 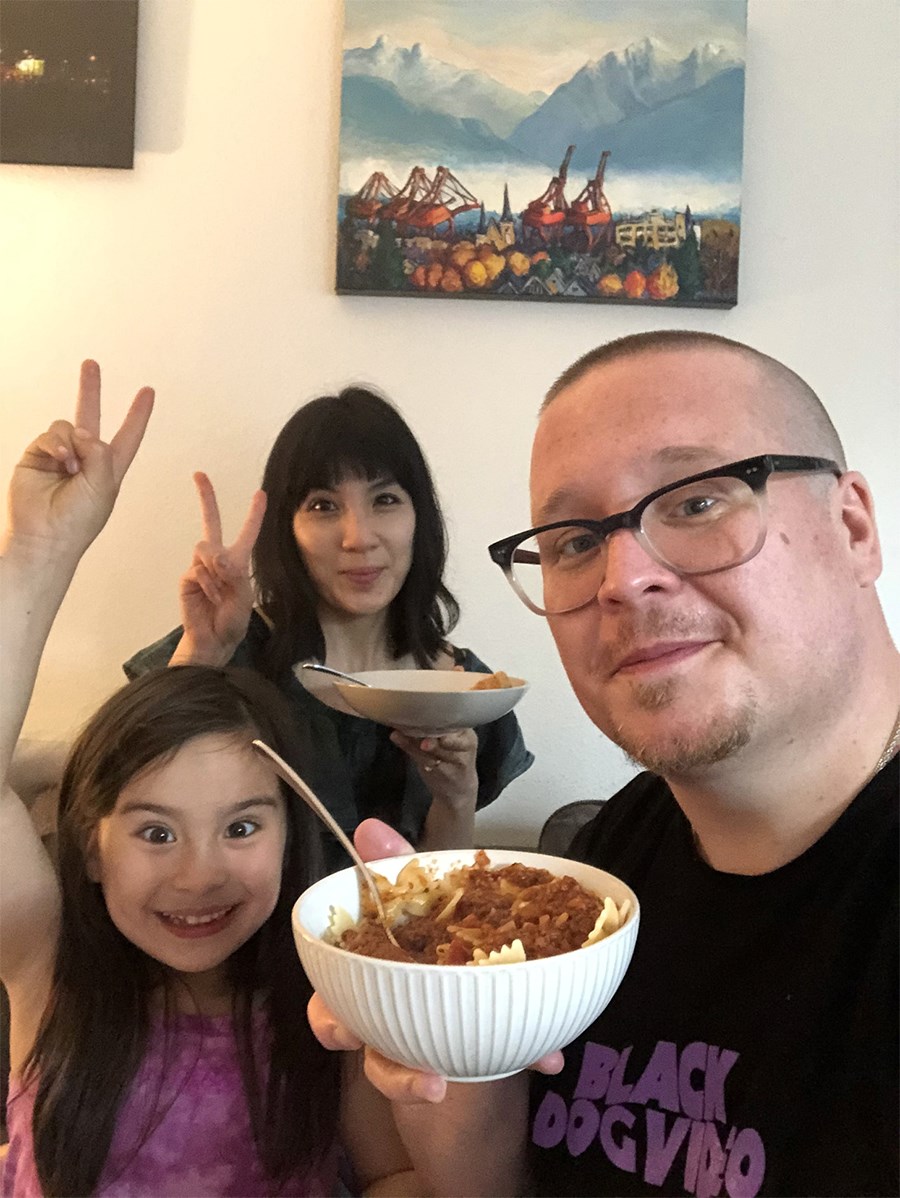 One of the reasons that Vancouver can feel so stubbornly like a backwater — even after hosting a set of Olympic games, a World’s Fair, and two league-standard Stanley Cup riots, all within the space of less than thirty years — is that it has trouble being more than one thing at any one time. Think about other major North Atlantic cities and the ease with which they have been overlapping and even contradictory things to overlapping and even contradictory people.

In the early 1980s, New York City was simultaneously the cradle of hip hop culture; the centre of the big money celebrity visual art scene; the laboratory for the democratic West’s variation of the neoliberal economic model that would come to rule the world; and the sunset of the American mafia. For as long as anyone can remember, Paris has at once been the centre of gravity of continental philosophy; holy of holies in international cuisine; and tourist theme park. Boston, epitome of the big city college town and simultaneously saturated by professional sports franchises has churned out pencil-necked geeks and the jocks to terrify them for generation after generation.

Vancouver, though, has never been able to convincingly pull off more than one act at once. Coming out of the Olympics, the idea was that we would aim to be a tourist hub real estate boom town and anti-climate change sustainable City On a (compost) Hill. Three guesses which option we favoured. Today, the city’s rich are torn between the desire to engineer the town as one more aesthetically interchangeable point on a Pacific archipelago of pay-dirt pleasure palaces or whether to treat the place as a WASP game preserve, where the single-family detached dwellings erected on stolen land within the past century are treated as some sort of naturally occurring feature of the landscape.

There is nothing inherent about Vancouver that lends itself to monochrome — in fact the opposite is true. As even the city itself now officially acknowledges, its boundaries are superimposed upon the traditional and unceded territories of not one but three nations, the Musqueam, Squamish, and Tsleil-Waututh. Which means that there was never just one language or just one culture in this place, and nearly all of the most exciting things about this town are a tribute to that dynamic and relational and dialectical tendency.

The city will soon have a post-modern 21st-century skyline partly defined by multiple soaring towers of housing built by the Squamish nation on land their ancestors were driven from, which must now be among the most valuable square-footage, in terms of dollars and cents, on the planet. The parts of the city that feel most unique and exciting, least like attempts to recreate cooler neighbourhoods in other places, are the spots where the multiple layers of what a place is or has been are allowed to rub up against each other.

In his essay ‘Joe’s Beach,’ the late critic Bruce Serafin describes the moment in 1990 when two of the subcultures on Commercial Drive — lesbians and Southern European machos —- collided; in outlining the moments that led up to the conflict, he writes of “the Drive’s fantasy of an environment that was simultaneously street-tough and politically correct.” There’s an acidic truth in that observation, but it can be taken too far, as well; my friends and I started hanging out on the Drive as teenagers, five or six years after the moment Serafin captured, and by then it remained (as it still, to a surprising degree, is now, only with more restaurants and high-end parenting paraphernalia) a neighbourhood that was part Little Italy, part hard-left stronghold, and main arterial route of the annual Vancouver Dyke March.

What does all, or any, of this have to do with the Argo Cafe, the booth and barstool, coffee and formica diner on Ontario street and 2nd Avenue?

Before I continue, let me take a moment to point out the magnificent significance of that location: Ontario, of course, is the official dividing line between the city’s eastern and western halves; the spot where East 2nd becomes West 2nd, and vice versa. The restaurant is just south of False Creek, meaning that Olympic Village and bits of Downtown, the DTES, and Chinatown are between it and the northernmost tip of the city, while everything else is south of it. Yes, that’s right: if Vancouver were a person, the Argo Café is situated almost right where their heart would be. But not just physically. 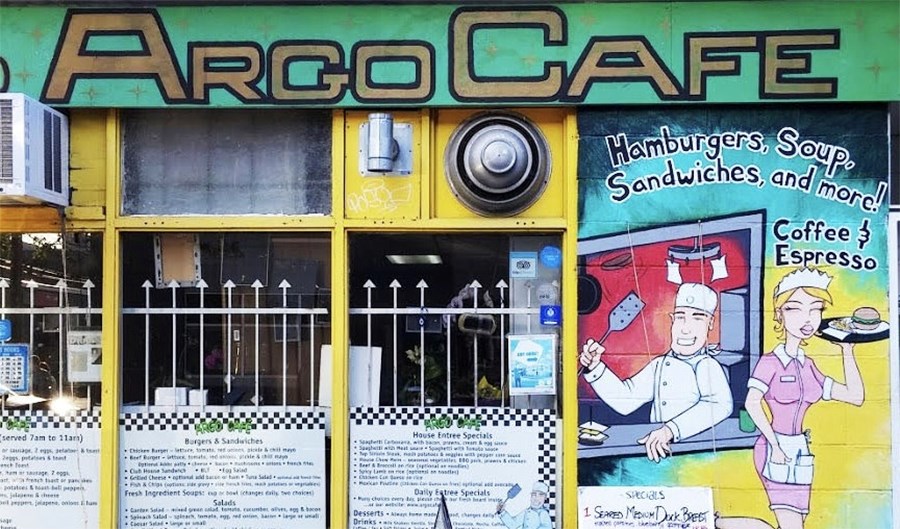 Outside the Argo Cafe in Vancouver. By ArgoCafe.ca

I’ve been eating at the Argo, I realized this week, for ten years. I remember exactly because my friend, Jordan, introduced me to this place, one of his favourites, when we were working together on a reality TV show in the offices of a production company around the corner.

In recent years, the Mount Pleasant neighbourhood has become a hub of the city’s film and television industry, with animation and recording studios, casting directors, production companies, and even, now, the offices of the actors’ union; my union, UBCP-ACTRA. Everyone who works in any of these places eats at the Argo.

I admit, here, that I am drawing from pre-pandemic data, but it’s all legit. I took my Dad during one of his visits from Halifax, and now he doesn’t come to Vancouver without us making a pilgrimage; I brought Marc Maron the day after opening for him at the Vogue theatre, and months later, when he had me on his podcast, he remembered not only the name of the restaurant, but also what I’d ordered (which was duck confit, and I’ll get to why that’s important in a second).

In the old days, when the Argo strictly hewed to workman’s diner hours (breakfast & lunch on weekdays, exclusively), my wife Cara was frustrated that she couldn’t ever make it to this gastro-Xanadu I wouldn’t shut up about. But finally, when she got pregnant, we had the opportunities we were waiting for: every time she took a half-day off for a pre-natal exam or appointment, we went back to the Argo for lunch, and she would rain the best fries in the city down onto our little miracle in utero.

Now all grown up aged seven, that former foetus nourished on Argo lunches was last night served pasta with meat sauce purchased the day before from the Argo Cafe freezer, and offered by way of review, without prompting, first “The only thing I don’t like about this is nothing,” followed by “I want to eat this for dessert.”

Let us now return to the significance of the duck confit — which perspicacious readers will already have noted apparently shares a menu, at least, with fries and meat sauce, to which I say: yes, and beef & broccoli, sweet & sour pork, cherry pie, cheeseburgers, dijon lamb shank, brisket & gnocchi (do not eat before walking uphill, he advised from experience), turkey clubhouse, and tiramisu.

Featuring a rotating board of specials (even during regular, non-pandemic times), this Thursday’s offerings, for instance, included House Chow Mein; citrus and black currant pork loin with mashed potatoes; spicy lamb on rice; chorizo pasta; a burger. This is because the Argo is, simultaneously, a greasy spoon, Chinese restaurant, and modestly-priced fine dining establishment. If the patronage comprises a catholic sampling of the city’s demographics, it’s likely because as many layers of Vancouver are on the menu as in the seats.

The Argo is the Vancouver unicorn: it’s authentic, and unpretentious; it does a million different things, but all of them well. But maybe most miraculously, for this town, is that the place has been discovered, and broadly enjoyed, without being sterilized or gentrified or gussied up. If you should go, there will be people there who won’t share your tastes or your politics or your economic standing, and neither of you has to leave. Neither of you is in the process of being pushed out.

It would be hard to ask for a more perfect microcosm of the city, a tidier metaphor for Vancouver, than a little restaurant serving chow mein, burgers, and duck confit. In our more hopeful moments, we might take note of the fact that here, it actually works.

The Argo is currently open for COVID-safe take-out and patio dining, and is also selling take-home soups, sauces, meatballs, and stews. Visit their website at https://www.argocafe.ca/ or in real life at 1836 Ontario Street.

Charlie Demers is an author & comedian. This post originally appeared at charliedemers.substack.com, where you can subscribe for new writing weekly & episodes of the Full of Chit-Chat podcast with figures from local politics & the arts.