This glitch is clogging traffic at this crazy Metro Vancouver intersection

The craziest intersection in Burnaby is at Canada Way and Kensington.
Oct 24, 2019 3:50 PM By: Chris Campbell

The craziest intersection in Burnaby is at Canada Way and Kensington. 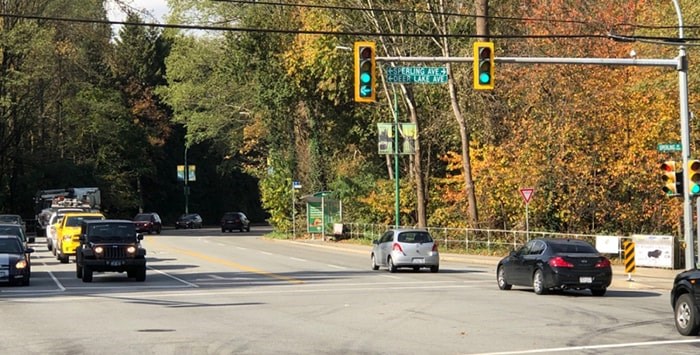 A flashing turn signal at Sperling and Canada Way that keeps flashing even though there are no vehicles turning. Chris Campbell photo

I say this based on the combination of poor design, bad behaviour and overall problems with traffic lineups during rush-hour periods.

You might have other suggestions and I will listen, but it would take a lot to change my mind.

Lately, this intersection has been made even more frustrating by what’s happening just half-a-block away at Canada Way and Sperling Avenue.

The City of Burnaby recently finished a project adding a new median and resurfacing some of Canada Way, just east of Sperling.

According to commuter Gordon Louie, problems began as soon as this project finished.

What happened was the westbound turn signal started glitching by flashing even though there aren’t any vehicles in the left-turn lane – or the signal would keep flashing long after vehicles had turned left.

During rush hour, a little thing like this can really stack up traffic even more than it usually does for vehicles heading eastbound. It doesn’t take much, Louie said.

“The backup that occurs during busy times is crazy,” he said. “It has been frustrating. This is my usual route home after work so I travel it quite a bit. However, I think I will take an alternate route until this issue is resolved.”

I dropped by this area after Louie contacted me and, yep, the left-turn signal starts flashing despite there being no vehicles needing to turn, with eastbound vehicles lined up waiting.

Louie contacted the city and received a response from a traffic assistant.

“We have been notified of this problem and are currently in the process of repairing the defected Detector Loops caused by recent development related project,” a city email said. “A new centre median was installed and the Left Turn Only Lane (on Westbound) east of the intersection was newly paved along with it. The paving did not include loop cuts and therefore resulted in a faulty sensors/detectors. Be assured we are expediting the process in order to fix the problems as soon as possible.”

If this sounds familiar, it’s because the same issue happened on Barnet Highway in August after the city finished a paving project - the light constantly changed despite there being no vehicles turning left. The result was traffic backed up for at least a kilometre. Read what I wrote here.

You would think the city would know about stuff like this and the consequences for commuters.