So which politician flushed their toilet during a Vancouver virtual council meeting?

Let me first state that my intention here is not to trivialize the work of a Vancouver city council doing its best to keep the business of municipal government operating during a pandemic.

The 15,000 businesses that have temporarily closed, the city bleeding up to $5 million per week and the health of citizens weigh heavily on these elected folks.

But we could all use some levity.

And we certainly got some at council’s fourth virtual meeting held Tuesday via an audio system that had the mayor and 10 councillors dialled in for debate and discussion.

City manager Sadhu Johnston was also on the line.

It would be the first meeting where Kennedy Stewart didn’t have to physically be in the council chamber, but could operate the controls from his downtown apartment.

Only the acting-city clerk and a meeting coordinator were to be present at city hall, all of this done to respect physical distancing measures.

But what began with such promise, quickly changed course to “we are experiencing technical difficulties” territory, as listeners heard a few minutes into the broadcast.

Coun. Lisa Dominato: “I think we have lost the mayor in the feed here.”

Johnston: “Kennedy, are you back?”

The mayor eventually did come back, but it required him to leave his apartment and get to city hall as fast as he could to run the meeting from the chamber. 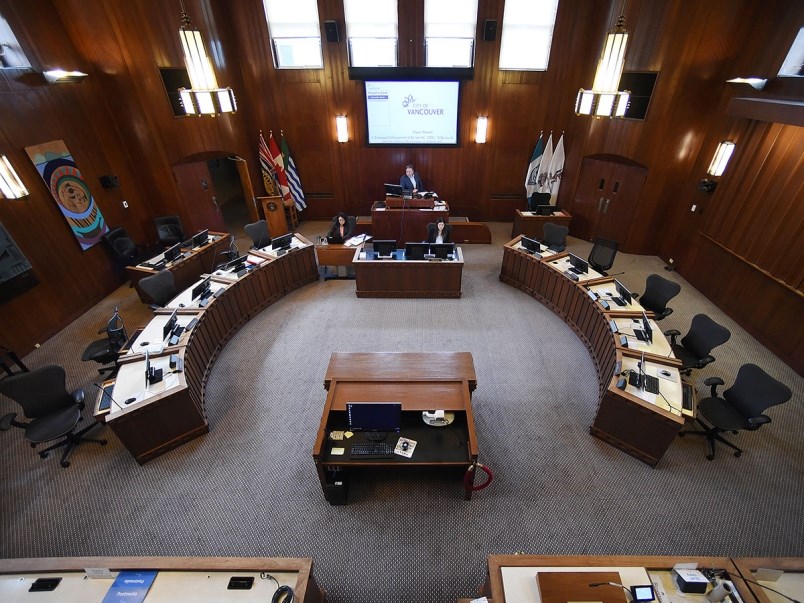 Meanwhile, listeners could hear staff working through the audio glitches — “test, test, test” — and ensuring councillors were still on the line.

Then we heard the mayor’s voice — he made it!

At that moment, all seemed technologically right in the municipal government world of Vancouver: the meeting was going to resume, journalists were going to take notes and democracy was going to prevail, despite these restrictive and extraordinary times.

And then, in an unprecedented event that will likely haunt the host of said memorable event for years, listeners heard the distinct sound of a toilet flushing.

It happened during roll call, just before Johnston asked councillors to mute their phones. Laughter was audible on the feed.

So was a remark from Coun. Jean Swanson, who concluded that “someone was doing council business on the toilet.”

Which prompted Johnston to quickly interject before anyone else commented on what they and everyone else listening just heard.

“We’re being broadcast right now, folks, so um try to use your…I don’t know…this a whole new territory for all of us, clearly.”

Of course, I tweeted this out, which served no real purpose except to have a laugh at the flusher’s expense and attract the punsters.

You can imagine what they said.

Rather than repeat them here, probably best for the flusher and others participating in virtual meetings to heed the excellent advice of tweeter Hosea Cheung: Stay home, stay safe, stay muted…please.

Such advice came a little late, as the mayor noted in the afternoon session of the meeting when he informed council “our little incident” made the national news.

Johnston: “You mean the ‘water feature?’”

Johnston: “Worthy of a movie.”

The flusher, meanwhile, never confessed publicly, although if people are looking for clues, the sound of that flush was quite powerful and not likely from a low-flush toilet.

And with that, I will now return to the more serious pandemic-influenced matters facing the city and its citizens, as I’ve been doing since mid-March.

First, I’m going to put my phone down and take a bio-break.