No butts about it: tossing your cigarette on the ground is unacceptable

As usual, improperly tossed cigarette butts come down to the responsibility of the smoker, and the hard evidence is all around us.
0
Jun 18, 2019 5:52 PM By: Grant Lawrence 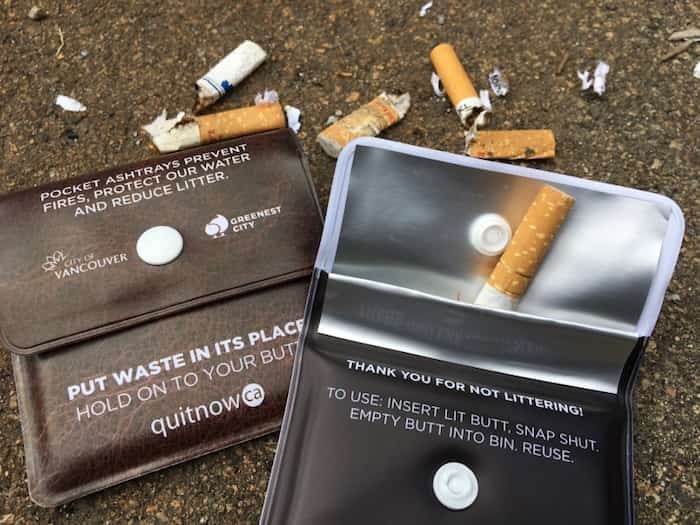 The city recently made available thousands of free pocket ashtrays for smokers to store their butts rather than snub out on the ground. Photo Dan Toulgoet

You know the scene: you’re strolling past a pub, bar or park bench, and suddenly you have to walk across a bunch of discarded cigarette butts. This wholly negative issue is especially prevalent in our dry season: there’s no rain to wash those butts away — not that that is any kind of solution.

As usual, improperly tossed cigarette butts come down to the responsibility of the smoker, and the hard evidence is all around us.

According to Jerry Dobrovolny, the city’s manager of engineering services, Vancouver smokers toss one million butts a day onto our sidewalks and streets. One million! A day! It feels like about 900,000 of those are in East Vancouver where I live.

Weirdly, the non-smoking laws that came into effect in the 1980s and ’90s, which banned smoking in the workplace, followed a few years later in bars and restaurants, actually added to the problem of butts on the street. Before the ban, if you smoked in a bar or a restaurant, you used the ashtray at your table, which would be cleared by a server and thrown in the garbage.

The non-smoking laws forced smokers onto the sidewalk, where they most often snub out their butts onto the pavement or toss them into the street. Even that abhorrent social ill is based on good intention: More than a century ago, the snubbing of cigarettes under the toe of your shoe, or flicking them into the gutter, was considered not only good etiquette but a safety practice. Back in 1910, if you didn’t snub out your cigarette, you could burn down Chicago.

Aimee Braun is the general manager of the Brighton, a pub in the heart of Hastings Sunrise. Her establishment has received complaints from neighbouring businesses upset about the proliferation of cigarette butts on the sidewalk.

I asked Braun if she had some sort of ashtray for her customers to use while smoking on the street.

“We used to,” she replied. “Someone from the local [Business Improvement Association] brought us an ashtray bucket, but it got stolen. Or at least it disappeared, anyway.”

A few ashtray buckets have apparently gone missing from the Brighton. So what do they do about the littered butts in lieu of an ashtray?

“If they’re really bad, we’ll sweep them into the gutter so the street sweeper can get them,” Braun told me.

I recounted that scenario back to an aghast Dobrovolny at city hall.

“Sweeping cigarette butts into the street or the gutter is exactly what you should not be doing,” he said. “Street sweeper trucks are irregular, and cigarette butts are a major source of unsightly litter and pollution.”

Dobrovolny claims that once a cigarette butt is washed down a storm drain, it’s a fairly straight path to our surrounding rivers, beaches and ocean. At a recent press conference on the subject, Dobrovolny also noted that butts are not biodegradable and contain such toxic ingredients as microplastics, arsenic and lead.

“Cigarette butts are a huge hazard for our marine environment,” Dobrovolny said. “Our city crews empty garbage cans. They don’t sweep sidewalks, which is why we need cooperation and partnership with businesses like the bar you mentioned.”

Jordan Stewart has owned and operated Guilt and Co., a cool venue in the heart of Gastown, since it opened in 2010. Before that, he owned Chill Winston directly upstairs.

“We used to put out ashtrays,” Stewart told me. “But if you can believe it, they would be looted by Downtown Eastsiders. If it was raining, that made an unholy mess. These days, we sweep up the sidewalk at the end of the night and put the butts in the trash.”

“It’s about being a good neighbor,” he said.

Earlier this month, Dobrovolny and the city launched a new initiative to help smokers with their toxic littering. The city has manufactured several thousand pocket ashtrays with the hopes that smokers will now tuck their butts into these little packets and properly dispose of the contents in the trash. The packets are available for free at most community centres, at city hall and the visitors centre.

“Regardless of how conscientious the smoker may be, and so many seem to not be, nobody really wants to carry a smelly packet of garbage around with them,” he said.

Stewart brought up another idea that would involve Vancouver’s huge population of crows.

“In Europe, they have been training crows to collect cigarette butts. The crow gets a bit of food in exchange for a butt.”

That was something I had to look into, and it’s true. In the coastal country of the Netherlands, six billion cigarette butts are tossed into the streets and canals yearly. It’s a major problem.

A Dutch team came up with the idea of the Crowbar, a station that would allow a crow to return a cigarette butt, and when an internal camera recognizes it, the Crowbar releases a treat for the crow.

Unfortunately, after a year of research and development, the team ended the project due to lack of money, and the unintended and unknown impact that gross cigarette butts might have on unsuspecting crows.

Yes, it seems that cig filters are so toxic that we should not even risk training crows to collect them. Sorry, Canuck. Almost had a legit gig for you.

So that brings us back to the smokers: Will you take responsibility for your habit? Will you properly dispose of your garbage? Or will you continue to pollute our sidewalks, city, beaches and ocean?

Take a long drag on that, and please, butt out responsibly.