We’ve lived in this trick or treaters’ paradise for seven years, but I didn’t know the history behind our famed Halloween hootenannies.
Nov 4, 2019 3:13 PM By: Grant Lawrence 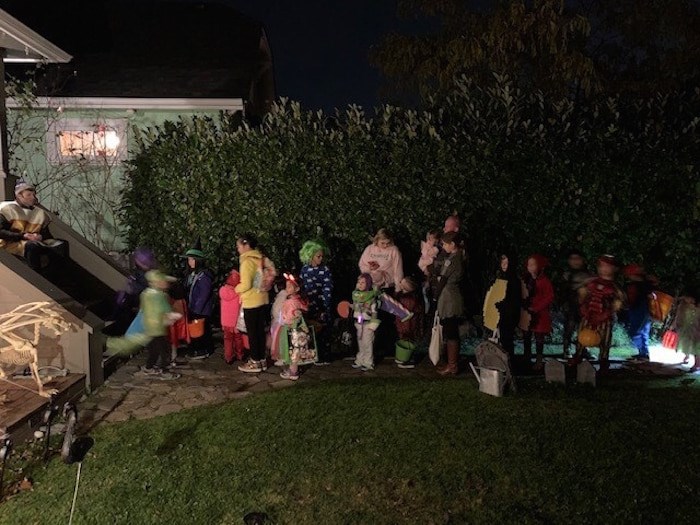 On Halloween night, I posted a photo on social media that showed a huge throng of trick-or-treaters lining up to get onto our front porch.

The pic captured just a small portion of what would eventually be about 1,150 costumed kids that tromped down our walkway to received a piece of candy from our house on Halloween night.

We know that to be true, because we bought 1,250 pieces, and we had about 50 pieces left at the end of the night, and I only personally ate about 50.

Reaction to that photo was swift and immediate. Most people were shocked, many asking the question, “What do you do to get 1,000 kids?” Others assumed incorrectly that we had to be that one house that was giving out the legendary Halloween goldmine of “full sized chocolate bars.” Nope, just the regular-sized mini chocolate bars.

Here’s the thing, which I’ve shared in this space before. My family lives on Trinity Street, which is a very festive, community-minded, six-block stretch in the Burrardview enclave of East Vancouver. The street is better known for its near-20-year tradition of the Trinity Lights holiday displays, when many houses test the city’s power grid by going full Griswold for the month of December.

I know the history behind the light displays, which began as a reaction to a tragic double-home invasion in the neighbourhood in 1999. Cate Jones, who has lived on Trinity Street for 30 years, spearheaded the dazzling displays as a way to make the neighbourhood feel safe again, and to bring people out of their homes and meet their neighbours.

Twenty years later, the lights still burn bright in December, and Halloween has also become a major, festival-like event. CBC named Trinity first on the list of Halloween’s best trick or treating streets. Global News set up a camera crew at the epicentre of the action at Trinity and Slocan for most of the night. One Trinity Street home reportedly clocked more than 1,700 individual trick or treaters, the highest count anywhere in Metro Vancouver. A neighbour spotted buses unloading hordes of costumed children on Renfrew Street, herding them on foot onto Trinity. Many residents spent more than $150 on candy. By 7 p.m., the sidewalk was shoulder-to-shoulder. In contrast, my parents on the North Shore received nary a single knock on the door.

We’ve lived in this trick or treaters’ paradise for seven years, but I didn’t know the history behind our famed Halloween hootenannies.

I called Cate Jones again. She told me that Trinity Street has always been decorative for both Halloween and Christmas, but unlike the Yuletide light displays, which came from a specific idea, the popularity growth of Halloween has been organic.

“I saw a Facebook memory from 2008 pop up the other day,” Jones told me. “That year, we had 500 kids. Now it’s easily double that, so it’s been slowly building over the decades. A few years ago it exploded. The media took notice, there’s positive word of mouth, a lot of younger families have moved to the area, and now the event just fuels itself.”

Jones also pointed out that Trinity Street is relatively flat and walkable for young children, with approachable, easy-to-access houses on either side.

As one of those residents, our family gets into the supernatural swing of things, decorating our front yard and making sure we have enough candy to cover more than 1,000 kids (mostly thanks to my mom and her Costco membership). And while it can be overwhelming to serve that many children in the space of about four hours, seeing the creativity of kids’ costumes en masse is amazing. 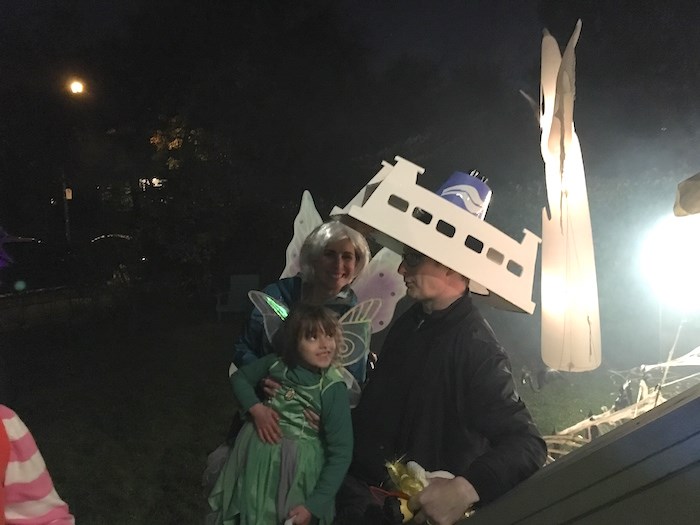 “The most creative costumes are always the homemade ones, and this year the best was a 20-foot tree, a BC Ferry and a fully operational vending machine.” Photo Grant Lawrence

I’ve realized that Halloween night is also an opportunity to grasp the zeitgeist of whatever the hell kids are into these days. The most popular getups this year involved the video game Fortnite, Disney’s multi-pronged franchise Descendants and, for whatever reason, Super Mario Brothers. Other perennial mainstays were Batman, Captain America, Rapunzel, Elsa and ninjas. Down this year were zombies, Star Wars and Paw Patrol.

The most creative costumes are always the homemade ones, and this year the best was a 20-foot tree, a BC Ferry and a fully operational vending machine. The cheekiest response of the night came from a young teenager who was seemingly without costume. I asked her what she was dressed as. Mini Snickers bar already safely in hand, she replied, “I’m an off-brand Ariana Grande.”

Trick or treating at the height of the monster mash was thrilling for our six-year-old son who slithered through the crowds in his snake costume, but proved a little much for our three-year-old daughter in her Princess Jasmine costume. After being jostled a few times, she demanded to be returned to her castle at once.

Dennis Campardo and his family have lived on the street since the late 1990s. “It’s intense, but it’s a lot of fun,” he told me. “I think we’re lucky to have this strong tradition, because it’s something that’s missing from a lot of neighbourhoods.”

Twenty years ago, the Campardos bought a novelty Halloween door matt that screams when you step on it. “It’s just a simple little censor and two batteries, but it still works,” Campardo mused. “My wife and I figure that 20,000 kids have stepped on that matt over the years, which is pretty amazing when you think about it.” 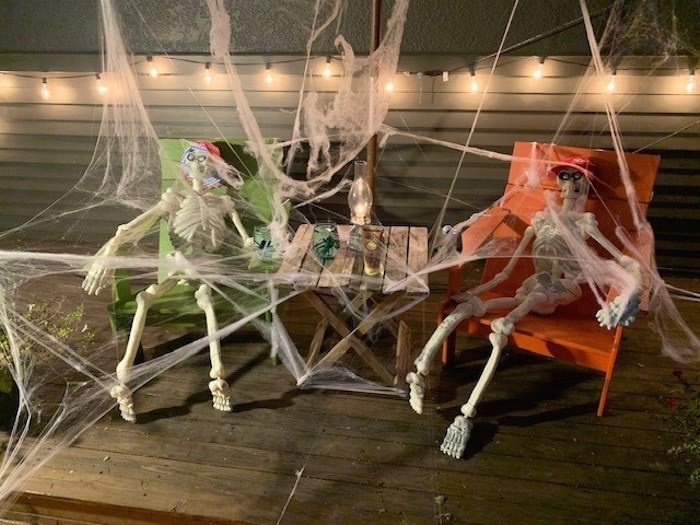 Until next year, trick or treaters. Photo Grant Lawrence

Here’s hoping that Halloween will take on a live of its own in your neighbourhood, too. BOO!