Last week Justin Trudeau and the Liberal Party of Canada announced a gun control plank of their re-election platform, headlining it by saying that they will " ban assault rifles in Canada ".
Sep 23, 2019 5:47 PM By: Bob Kronbauer

Last week Justin Trudeau and the Liberal Party of Canada announced a gun control plank of their re-election platform, headlining it by saying that they will "ban assault rifles in Canada".

Their pledge is to "ban all military-style assault rifles, including the AR-15" as well as to "protect the rights of law-abiding hunters" by not bringing back the long-gun registry.

To the average person who knows nothing of gun laws in Canada, that sounds like a pretty decent thing to do.

They can both fire multiple rounds, fast.

The types of all-black, "military-style" rifles Trudeau is looking to ban don't differ much from their hunting rifle kin aside from one thing:

Assault rifles look scary, and we can probably all agree that we don't want bad guys owning them.

That's ripe for some vote-gettin' right there. Another problem lies in the fact that these weapons are not being used by criminals on the scale that the Liberals would like you to believe when they cite gun violence stats where 2,500 more Canadians were victims of it in 2017 than they were in 2013.

As far as my research tells me, semi-automatic assault rifles have been involved in three mass shootings in Canada. All of them occurred in Quebec.

In 2017 the Quebec mosque shooter brought with him a (legal) .223-calibre rifle made by the company Czech Small Arms, with an (illegal) 29-round magazine.

Anybody with a basic Possession and Acquisition License can buy one of these Czech Small Arms rifles from Reliable Gun on Fraser street and Kingsway in Vancouver right now. It costs $1,399.99.

The assault weapon jammed and the shooter wasn't able to use it, so he resorted to firing 48 rounds from a Glock 9mm handgun, killing six people. He reloaded it four times.

In 2006 the Dawson College shooter used a non-restricted Beretta CX4 Storm (also available in Vancouver, today) to kill one person and injure 19.

In 1989 the shooter at École Polytechnique in Quebec killed 14 women with a Ruger Mini-14 rifle.

Following that tragedy, the government enacted tighter gun laws, one of which included restricting the number of rounds allowed in magazines.

Assault rifles sit on the shelf at the Bass Pro Shops store in Tsawwassen, next to not-scary-looking equivalents.

The two shown below shoot the exact same ammunition, hold the exact same number of rounds in their magazines, and are sold to the exact same license holders. The only difference in terms of safety for Canadians is... nothing. 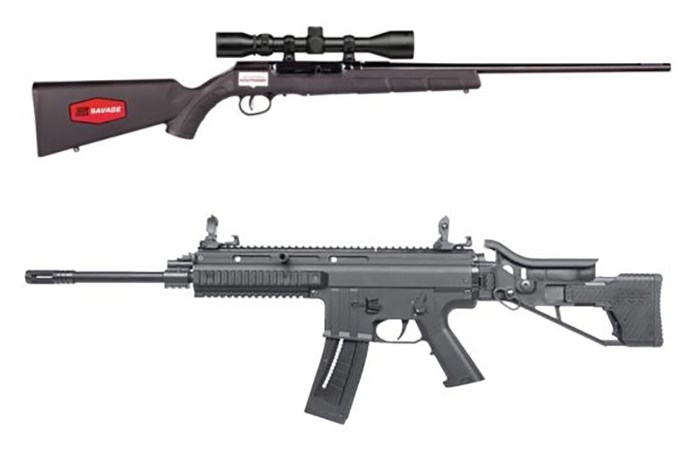 However the issue of handguns in cities is mostly around illegal ones, according to the Canadian Association of Chiefs of Police.

Another promise is to "further strengthen safe-storage laws" which are absolutely rock solid already; if you have guns in your home it's the law that they are to be unloaded and locked in a safe or with a trigger lock which renders them un-fireable.

In 1996 the Prime Minister of Australia made sweeping changes to their gun laws after the Port Arthur massacre left 35 people dead and 23 wounded. They initiated a buy-back program where they took 640,000 weapons from citizens and incinerated them.

I'm not saying I'd personally support a move like that. But if Trudeau truly wanted to put his money where his mouth is on the issue and take an actual political risk, he'd propose something that actually had teeth.