Vancouver is always a good foil for parts of the country who see us as a bunch of bike-riding latté sippers who have no idea how the extraction of natural resources boosts the Canadian economy.
Vancouver Courier Apr 24, 2019 2:03 PM

“The NDP mayor of Vancouver said he wants a carbon-free Vancouver by 2040,” said Alberta’s leader of the United Conservative Party Jason Kenney just three days before winning a landslide victory.

“Well, if the B.C. New Democrats continue to block our energy, we’ll happily give them a carbon-free Vancouver by 2020.” 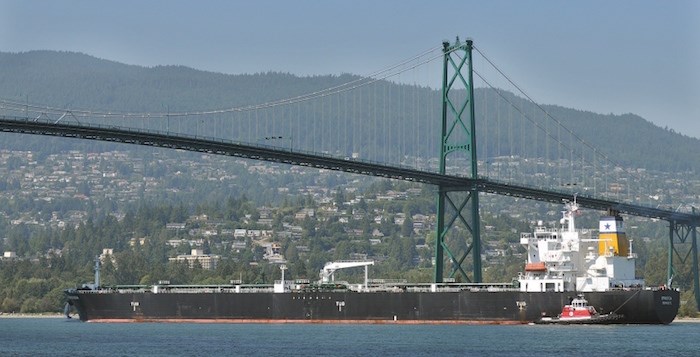 Over the past decade, the City of Vancouver has invested heavily in campaigns to raise the alarm over the expanded shipments of Alberta oil products through Burrard Inlet. Photo Dan Toulgoet

This stump speech aimed at his NDP opponents both at home and here in British Columbia grabbed headlines on both sides of the Rockies. Kenney, of course, was referring to the former NDP MP Kennedy Stewart, who ran and won as an independent mayoral candidate in Vancouver last October. The 2040 date is not exactly accurate either — the aspiration is to be running the city on 100 per cent renewable energy a decade after that.

But why let facts get in the way during the heat of an election campaign? The point is the City of Vancouver is always a good foil for parts of the country who see us as a bunch of bike-riding latté sippers who have no idea how the extraction of natural resources boosts the Canadian economy.

Kenney’s bold threat is to immediately put into force legislation that would limit the supply of Alberta energy products to B.C. Whether this is possible or not will likely be decided in a court of law.

The premier-designate’s campaign rhetoric shines a light on a growing divide between the urban and rural parts of Canada that is somewhat of our own making. For some time now, policymakers in Vancouver have thumbed their nose at extractive industries, and envision a city that is no longer dependent on tax revenues generated by mining, forestry or LNG.

Good luck with that happening anytime soon, by the way.

This week, Vancouver city council is being asked to approve several policy motions that will push the envelope of environmentalism even further, starting with a presentation and 42-page report from the Chief Resiliency Officer (CRO).

The CRO position was established with great fanfare in April 2017 during an announcement by former Mayor Gregor Robertson. Two years of funding were provided for the role by the Rockefeller Foundation as Vancouver joined a global list of 100 Resilient Cities, or 100RC.

I wrote a column then calling it the city’s most expensive “free” hire ever. In addition to the CRO, an additional two staff were hired to lead the resiliency research. Council will be asked to continue funding the department’s efforts beyond 2019. Their report attempts to make the case for more inter-departmental coordination around disaster response among other goals.

Earlier this month, the foundation announced it was no longer funding 100RC after providing US$164 million in grants to the project, and laying off more than 80 employees in its New York City head office. What Rockefeller Foundation gained out of the exercise is unclear, although one of the project’s goals was to convince member cities to make use of a suite of consulting services vetted by the organization.

Just saying the name “Rockefeller” in Alberta these days is a good way to have a door slammed in your face. Instead of being synonymous with Big Oil (the family patriarch J.P. Morgan once reigned over the world’s largest oil producer), the Rockefeller family name has become known for a coordinated effort to damage the reputation of and limit the markets for Alberta’s oil sands industry.

Over the past decade, the City of Vancouver has seen itself as more politically aligned with the Rockefellers than with the people of Alberta. It has invested heavily in campaigns to raise the alarm over the expanded shipments of Alberta oil products through Burrard Inlet.

If there was any middle ground, it certainly was not explored by Vancouver administrations. Our city could champion best-in-class marine transportation, sustainable resource development, or promote the safe movement of energy products to the benefit of all communities. We could do this, and promote environmental goals, too.

Instead, the city is seen as more of an obstacle by rural communities on both sides of the provincial boundary.

No wonder the political pendulum next door has swung so hard to the right. The question is whether a similar backlash is coming to B.C. next.