Vancity Buzz has no competition

Over the past week I've read around 30 different opinion pieces about Postmedia's recent move to downsize their operations across Canada, combining their newsrooms in cities where they have 2 daily newspapers operating.
Jan 25, 2016 10:57 AM By: Bob Kronbauer

Over the past week I've read around 30 different opinion pieces about Postmedia's recent move to downsize their operations across Canada, combining their newsrooms in cities where they have 2 daily newspapers operating. Vancouver is one of these markets with the media giant operating both the Province and the Vancouver Sun, soon to be combined into a single newsroom as part of a national attempt to save $80 million and not go out of business. To put it lightly it hasn't been celebrated as the best news for journalism and traditional media companies in Canada.

Journalists at almost every publication in the country have chimed in on the issue (my favourite being Marsha Lederman's at The Globe), and while I always try to remind readers that I am not a journalist I do run a media company, and at 39 I have almost 20 years experience in digital publishing which I don't talk about very often (holy crap I am getting old). Back in 1997 I started the world's first online skateboarding magazine and built it up to the point where it was acquired by Joe Firmage of USWeb. I worked at a dot-com of his soon afterwards (until that bubble burst), then went on to work at Hollywood director Spike Jonze's skateboard company fine tuning their online offering; a publication called Crailtap connected to a skateboard store which generated hundreds of thousands of dollars a month. When I moved back to Vancouver I started this blog you're reading now, which wasn't intended to be a business but quickly turned into one. I feel lucky that it's my full time occupation, and that I'm able to employ a team to bring you the awesomeness month after month. Again, I am not a journalist and what we do here is not journalism, but I know a thing or two about publishing online.

Vancity Buzz was once a competitor of ours. Local blogs started roughly around the same time, we were both publishing fun and engaging stories about the city around us. I don't know the exact date when they pivoted but they took a hard turn into actual news, skyrocketing their traffic and social followings. At the time I thought (and may have tweeted) "Oh wow, they're going after the Huffington Post", and it didn't take long for them to lap AOL's BC arm. A couple times as a matter of fact. And when it comes to independent news publications that began online they don't really have any competition at this point. While V.I.A. and VCB may be competing for some of the same ad dollars what we do is unmistakably different; we're still a fluffy lifestyle blog and they're now a news publication. 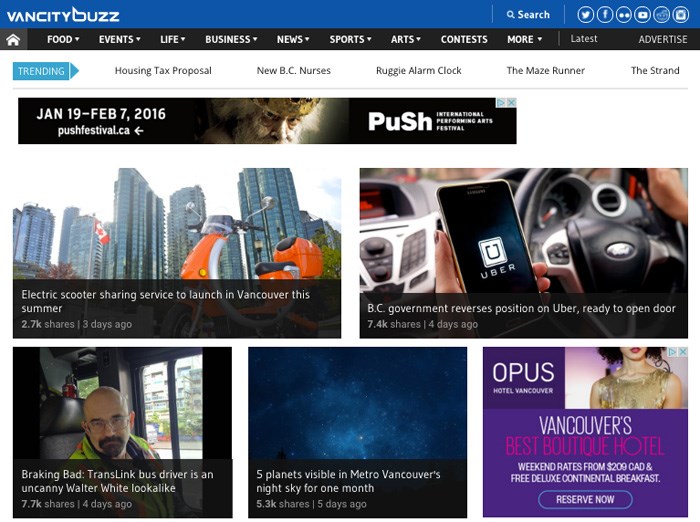 The Tyee is VCB's most promising rival in their category right now. Staffed by veterans of the newspaper industry with traditional journalistic ethics, they've been around for 13 years delivering serious news and really great political reporting. But when was the last time you saw someone share one of their articles on Facebook? That platform is king when it comes to getting your stories out and the Tyee has 10,700 Likes on their page; a paltry showing when you compare to VCB's 267,000, and indicative of their ability to market content people want to read. Also, their business model is a lot different: they rely heavily on large investments from progressive groups who seem to not want a return on their money but simply see The Tyee continue to deliver news they see as important. Only 20% of their revenue comes from advertising and after 13 years in business (almost twice as long as VCB) they're not yet a profitable operation. They'd likely never do the type of sponsored content you see everywhere else these days - in fact they once skewered us for doing it - and they get 6 times less readers to their site which covers all of BC, not just Vancouver. Yet they are still Vancity Buzz's main competition.

Vancity Buzz has done an incredible job of disrupting the news locally. "Preying" might be the wrong word (or the right one, depending who you ask) but they've relied heavily on the resources of the traditional mainstream media in the city who employ professional journalists to chase down and report on stories. They've walked a thin line between aggregating and claiming others' stories as their own, and they've become so big that they can't be ignored. With their recent growth they've been able to hire more staff and as their sources shut down and amalgamate, their survival depends on them becoming one of those outlets and producing actual news stories all on their own. While their founders didn't bring previous experience in journalism or media they're on a learning curve now and as a digital-first publication they have the advantage of not having a massive overhead built on publishing an actual printed publication. As they pass the Province and the Sun it's likely they'll take on Global and CTV and that on the horizon we'll see Vancity Buzz TV, then a Canada Buzz national news and entertainment channel. There's no doubt that they'll continue to run a successful venture in this city, one that a large percentage of you urbanites will continue to get your news from. But it can't be just them.

I've got a 500 Coffees interview scheduled with Rob McLaughlin, the man who you may have read has been put in charge of the Sun and Province's new combined newsroom. I'm hoping he's going to provide me with hope that Postmedia can pull success out of the near-ashes and keep publishing these two very important sources of news in our city. I'm skeptical, but I want to believe.

Regardless of if those papers continue or not, there needs to be more digital-first news publications in Vancouver. I applaud VCB's success and hope that they can become a trusted and respected news source but my headline is not meant to be celebratory; we need more diversity in the market. I feel like the best thing that could happen for the news industry is that the journalists about to take buyouts (and the ones who have not been so lucky and simply got laid off, not just from Postmedia but other local outlets) band together with some business minds and create a new online news source. Not hindered by the past decisions of media barons, and perhaps not even protected by a union, there's got to be a model where the people creating the news - the journalists that we love - can not only continue doing their very important work, but have an actual stake in it. I'm not the one to head up this venture but if you're working on something new and you're reading this, give me a holler. I want to help.