This bike was stolen, dismantled and — surprise! — returned to its Vancouver owner in a day

If you own a bike in Vancouver, you probably know you might not own it for long. According to a recent police report, Vancouver leads the country in bike thefts per capita.
0
Jul 31, 2019 3:14 PM By: Grant Lawrence

If you own a bike in this city, you probably know you might not own it for long.

According to a recent police report, Vancouver leads the country in bike thefts per capita.

Thanks in part to our year-long cycling weather, we also own more bikes per capita than any other major city in Canada. But, still, bike theft and the underground market that propels it is relentless. 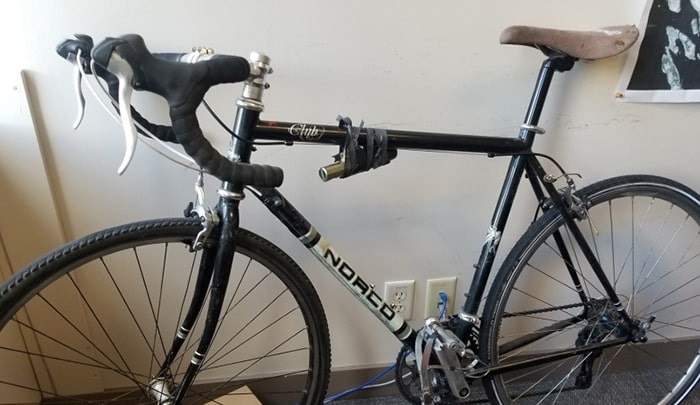 The police also report that bicycle thefts are down from peak pinching in 2015, when more than 3,000 bikes were snatched. In 2018, just over 2,000 bikes were reported stolen, though many people may not even bother to report it when their bike disappears.

Facebook is full of lifted bike laments, with many owners bidding a sad adieu to a two-wheeled friend they are fairly certain will never be seen again. Next time, they almost always say, they’ll get a better lock.

As if to rub our faces in it, temporary chop shops dismantling stolen bikes operate in broad daylight throughout the Downtown Eastside. One recently popped up at Carrall and Hastings. The bike path was literally being blocked by stolen bike parts.

For the past six years or so, my longtime friend and bandmate Nick Thomas has been locking up his Norco Club 17-speed road bike to a metal fence protecting a tree, just outside his office at 789 West Pender St. Last week, when he emerged for a mid-afternoon coffee, he stopped short, staring at the empty tree guard.

“I remember feeling confused,” Nick told me. “I thought to myself, ‘Did I leave my bike at home today?’ No. I rode it to work.”

Upon closer inspection, it appeared that Nick had locked his bike to the bolted section of the fence rather than the welded parts. The thief had unscrewed a bolt to get away with the bike.

Nick vented his frustration on Facebook as well (he had just sunk $300 of repairs into the bike) and spread the word, on the very slim chance it might turn up.

He also reported his stolen bike to VanCity Bike Watch. He was discouraged at the sight of a Google map carpeted with so many layers of pins marking bike thefts that it blacked out the downtown core and much of the West Side. 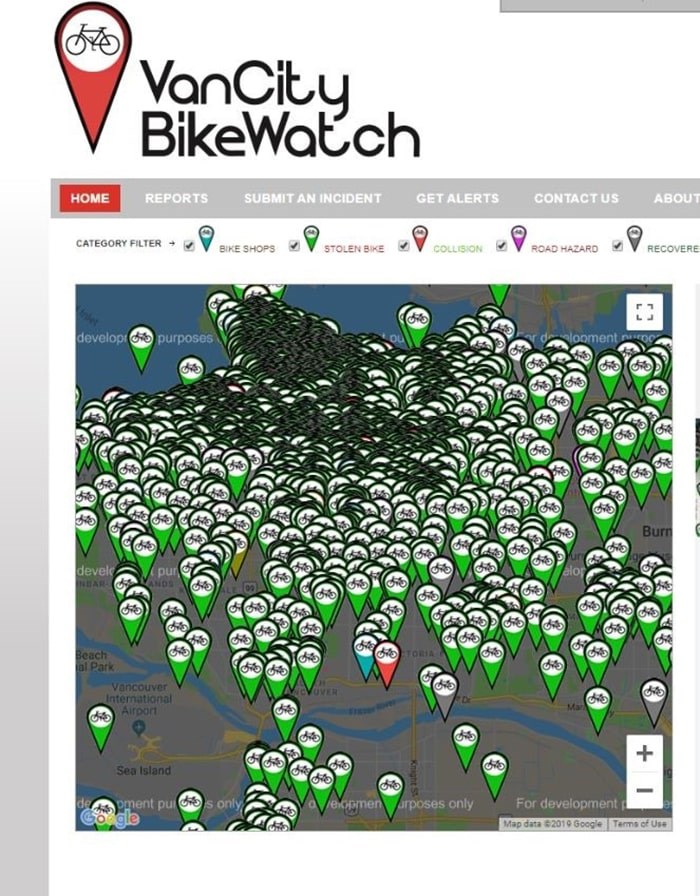 Johnny McQueen has been a Vancouver bike courier since the early 1990s. He knows this city better than the contours of his bike seat, and has deep connections in the cycling scene.

Johnny shared Nick’s post along with the photo of the stolen bike to his courier Facebook group. The next day, an eagle-eyed courier named Dustin spotted Nick’s swiped bike in the possession of a youth near the corner of Davie and Burrard.

After a brief and civil negotiation in which Dustin told the thief that he knew the bike was stolen and wanted to return it to the owner, a deal was struck to buy the bike back for $60.

Dustin then brought the rescued cycle back to the couriers’ office at Cordova and Howe.

Within 24 hours of getting his bike stolen, Nick had it back. You could call it a Vancouver miracle.

Oddly, the young thief asked Dustin to pass something on to Nick, a no-hard-feelings rubber toy type thing he called a “karma dinosaur,” though a more suitable name might be “ransom raptor” or perhaps “extortion elaphrosaurus.” Nick keeps the toy under his desk. 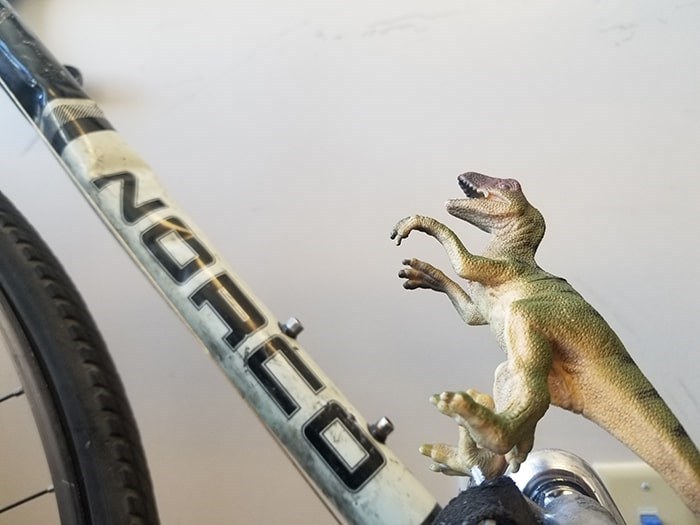 When Nick looked over his returned bike, he was amazed at the alterations it had gone through overnight. It had clearly been ridden straight to one of those pop-up chop shops to change its appearance as quickly as possible. The front wheel had been replaced (with something better than what was originally on it), the rear rack had been sawed off and the lock (which was still locked) had been bashed, smashed and sawed upon but held firm and still works.

Nick was overjoyed to get his bike back and made sure to reward Dustin and Johnny in beer and cash. Nick also has the rare distinction of having bought his bike twice.

“From now on I’m keeping my bike inside my office,” Nick told me.

Despite Nick’s ordeal, Vancouver’s statistical dip in reported bike thefts is mostly credited to Project 529, a North America-wide database that allows the public to register their bikes, which makes it much easier for the police to return them.

Besides signing up for Project 529, here’s a few other tips to avoid either getting your bike stolen, or to get it back: