Christopher Porter of Vancouver broke down all of the various platforms that candidates and parties have put forward, leading up to the 2018 Vancouver election.
0
Oct 9, 2018 1:20 PM By: Bob Kronbauer

Vancouver renter/blogger Christopher Porter has done what nobody else seems to have been able to do. He's broken down all of the housing platforms for the upcoming election in a way that's free of partisanship, laying things out for voters in a simple manner.

Inspired by Hector Bremner's YES Vancouver party releasing a similar undertaking which was laughably slanted in their favour (because why wouldn't it be?), Porter offers both a quick reference guide as well as a more detailed look at housing platforms of independent candidates and parties. 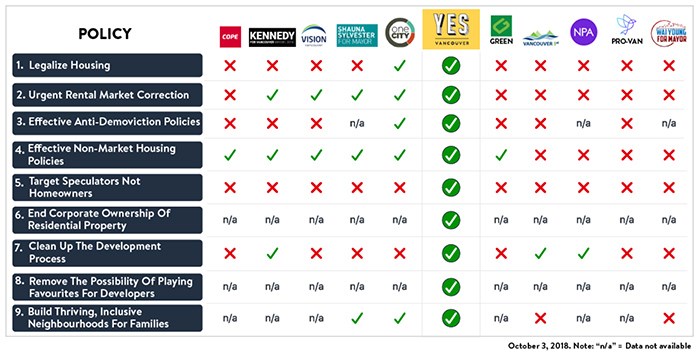 WHAT ARE THE CHANCES that Yes Vancouver would get green check marks in ALL of the boxes on their own “Easy Guide” to the various housing platforms? Screengrab

Check out Porter's quick chart in the tweet below then read this blog post that he made which gets into the nitty gritty.

With dwindling resources for reporting on the civic election hitting some media outlets in the city, engaged citizens like this guy are helping fill the gaps. Unfortunately they're also being filled by clever political parties and their campaigns, like we saw with the one-sided guide that Yes Vancouver released.

My attempt to compare the housing platforms of Vancouver's political parties and independents. I was inspired by @LetsFixHousing's infographic but wanted something more objective.https://t.co/cOEVcD7uU8#vanpoli #vanelxn18 #vanelxn Let me know if I missed something. pic.twitter.com/d5WEmj6bRQ