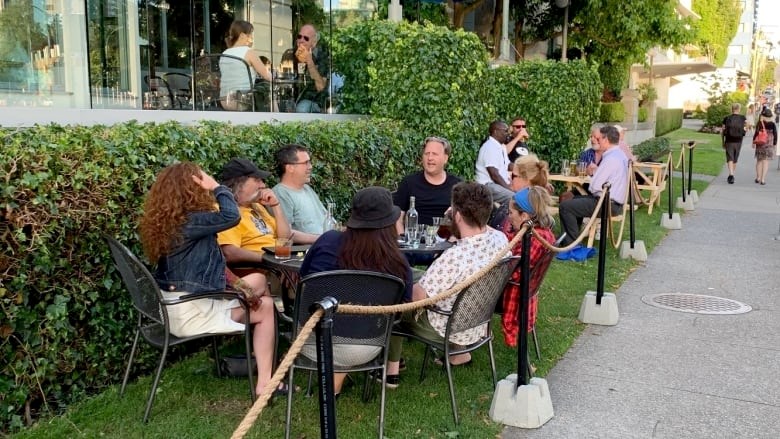 As a CBC News piece revealed, last week he was seen seated on the patio of a West End restaurant with seven other people.

The number of people who are allowed to sit together at Food Service Establishments in B.C. during COVID-19 is, of course, six, as the mayor should clearly know.

It's written in an order issued by the Provincial Health Officer late last month and you'd think if there's one person besides DBH who should be setting an example and adhering to it in Vancouver, it'd be the mayor. But not this mayor.

In a statement provided to us by his office, Stewart begins by saying that "COVID-19 is a serious issue," and that he and his wife had got together with "other couples" for a meal when the above photo was taken.

Apparently a couple joined them late and, apparently, they realized there were too many people, so they "dispersed".

He says that "it’s easy to make a mistake, especially when you are busy catching up with the people you love but haven’t seen for some time."

Nowhere in his statement does he apologize, or say that he'll maybe try to do better moving forward. It reads to this columnist like an excuse, and gives license to anyone to not pay close attention to the rules. It shows a lack of leadership we've sadly come to expect from him.

Now, fortunately for our bumbling mayor, it's not up to patrons to make sure they're not contravening public health orders.

Stewart and his family wouldn't be subject to any sort of real consequences (beyond being written up in the media) should they be found to be violating the order.

Nope, it's the already-struggling restaurant owners who could be forced to close down when it's found that they're not properly enforcing an order.

The next time you see the mayor stand up at a press conference and talk about how the businesses of this city need all the help they can get to navigate their way through this disastrous time for them, know that on his own time he's out there mingling like he's in a drum circle, putting them (and us) at risk.

FULL STATEMENT FROM THE MAYOR REGARDING THE PHOTO ABOVE:

COVID-19 is is a serious issue, and we all know how important it is to follow physical distancing and public health order rules.

My wife and I were joined by two other couples from my immediate family for a meal outside. For a short time, another couple from our family joined us, but when we realized we were over the six person per party limit, we dispersed.

Businesses and residents have done an excellent job in Vancouver adapting to the new rules and enjoying themselves while staying apart. This is what myself and my wife aim to do with our family and friends, and we hope everyone does as well.

But it’s easy to make a mistake, especially when you are busy catching up with the people you love but haven’t seen for some time. What’s important though is when you do catch yourself, like I did with my family, add some space and keep staying safe.

Opinion: Vancouver Pen Shop move is another chapter in downtown decay
Dec 4, 2022 8:46 AM