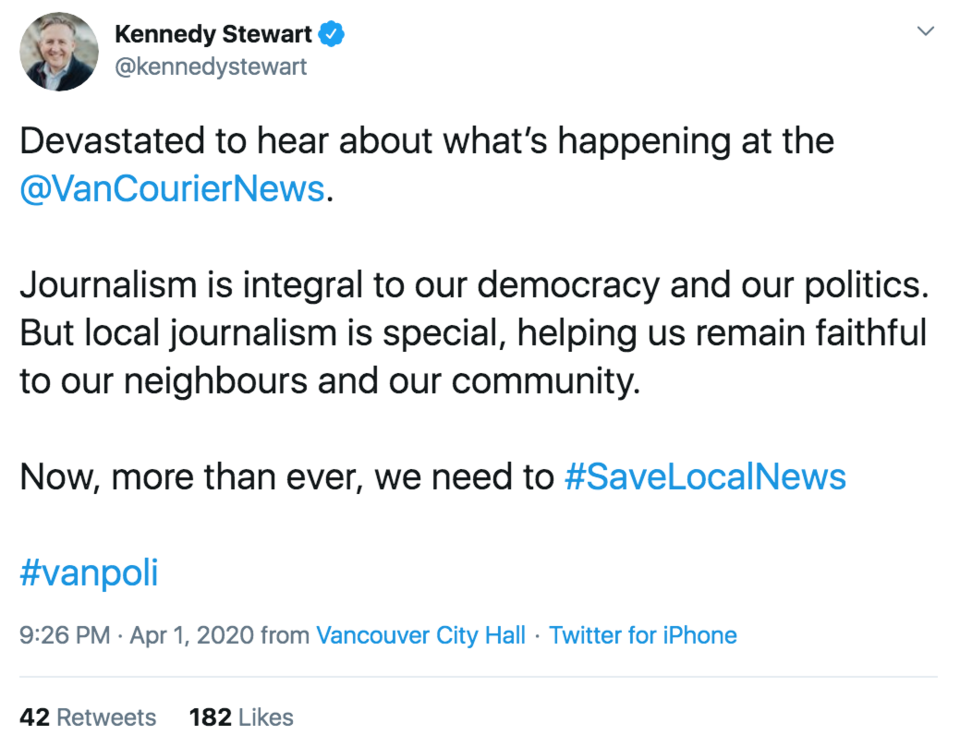 Vancouver’s mayor Kennedy Stewart pulled a not-so-hilarious April Fools Day prank this year, at the expense of the local media. Specifically? Us.

In a tweet issued on April 1st, Stewart signaled that he was “devastated” to hear that the Vancouver Courier newspaper was shutting down temporarily, and that “we need to #SaveLocalNews.”

That newspaper he’s talking about used to have a staff that operated right next to us in our office, but the sister publication of ours had to close its doors for the time being due to a lack of advertising.

That’s the same paper whose sales team were told just days before that the City was only advertising on social media; paying Facebook for ads.

We called the mayor’s office after he issued his tweet, thinking that perhaps he had a change of heart and was going to put his money where his tweet was.

We were told that they “don’t control” the budgets of the marketing teams there.

We have sister publications in Richmond, North Vancouver, Burnaby, New West and more than 50 other cities in western Canada. Somehow the politicians in most of them do have control over where the marketing budgets are spent. And most of them have pitched in to take out ads at this time, when we need them the most.

These cities are buying advertising to help “#SaveLocalNews”, like Kennedy Stewart says they should.

But that’s not happening in Vancouver on his watch, as it would seem that scoring cheap political points on social media is mostly what our mayor is doing to help “save” us at this point.

They’re scored at the expense of my colleagues, our business, and in the end the citizens of this city who need free publications like V.I.A. and the Vancouver Courier to remain informed about what’s happening around them.

In a followup email received this week, a representative from the mayor’s office let us know that Stewart’s commitment to local news is currently that he has “drastically increased his availability to the media,” and that “This is a commitment primarily to local news.”

They noted that their office might try to “funnel” some money from their budget into ad buys with local media, then went to the classic municipal government go-to: “The only real solution is direct support from senior government.”

The Courier and its City Hall coverage may be gone for now, but rest assured we’ll be keeping a critical eye on what’s going on up there.

In the mayor’s own words, it’s integral to our democracy that we do.