Remember when Oppenheimer Park got a $2.3 million makeover?

Once upon a time, there was some hope for Oppenheimer Park.That time was 2009 when a $2.3 million redevelopment of the then-neglected two-acre piece of land, bounded by Powell, Cordova, Dunlevy and Jackson streets, was in its early stages.
0
Aug 15, 2019 4:20 PM By: Mike Howell

Once upon a time, there was some hope for Oppenheimer Park.

That time was 2009 when a $2.3 million redevelopment of the then-neglected two-acre piece of land, bounded by Powell, Cordova, Dunlevy and Jackson streets, was in its early stages. 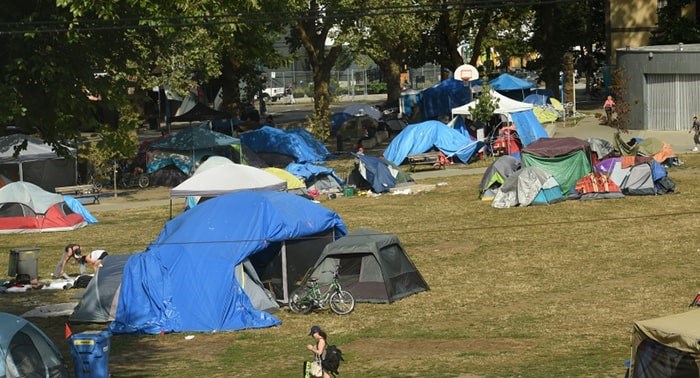 I visited the park in March 2010 to check on its progress.

The response to the upgrades was met with collective optimism from a business owner, nearby residents, police, festival organizer and the park board’s project manager for the redevelopment.

The hope was beautification of the park would return it to a place where kids could run freely, the baseball diamond would get some use and people could just chill out, read a book, play fetch with a dog — you know, things you do in a park.

For years leading up to the revitalization, the park was not exactly conducive to that type of activity, with drug dealing and violence more prevalent than a baseball game.

Talk of a makeover brought hope.

Said one resident at the time: “This is good for everyone and I think it’s going to raise everybody up and it’s going to encourage us all to work on community building together.”

The business owner: “Things are changing, and I always say change is good.”

The police officer, after strolling the park on a day that a row of cherry trees were in bloom: “I really hope people come here for the right reasons, and we’ll do our best to make sure it stays as nice as it is today.”

That, as is most visibly evident this summer, didn’t happen.

To emphasize that understatement:

In a media briefing July 11, the Vancouver Police Department issued a public statement about the safety concerns they had for campers at the park, city staff working at the park, firefighters and themselves.

Which, in my time on the job in Vancouver, was unprecedented: I’ve never heard this city’s police force publicly express how they were concerned for their own safety in a neighbourhood.

“We want people in the park to be safe and, currently, the environment there is not safe, even for our officers,” said Staff Sgt. Jason Robillard, who noted an officer was assaulted as she tried to assist city crews working to keep the park clean.

That statement came after a gun fight in Oppenheimer.

In June alone, police responded to 92 emergency calls in the park. There were 87 in May, which casts doubt on the narrative from some activists that the encampment is solely a place for good people down on their luck and unable to find housing.

Now the business community is going public with its concerns about the park.

The Strathcona Business Improvement Association found that 83 per cent of business respondents operating in and around the park agree efforts should be made to return the park to its original purpose as “a green and social space.”

By the association’s count, there are close to 130 campers living in the park.

The association was clear in the news release it circulated Tuesday that the occupation of the park presents a complex situation for the community, with “the challenging task ahead of housing folks facing multiple barriers” noted in survey responses.

Themes of empathy and care for the campers were expressed. And one person said “we can’t just kick those campers out, they need somewhere to go.”

So where do they go?

In this city, where 2,223 people were counted as homeless in March, that is a never-ending debate about an intractable problem. Governments point fingers at each other and those on the right side of the political spectrum and those on the left duke it out on all forms of social media.

It feels good for the combatants, but it amounts to noise.

As all of us know there is not enough housing or support services in Vancouver for the homeless, many of whom addicted, mentally ill and on a meagre income, if any.

But what to do about the crime, the disorder and the effect on businesses when escalating street disorder and encampments are a reality for residents, workers and visitors to a neighbourhood?

Some of you may have read the story I wrote last month about the owners of the Patricia Hotel, which is a few blocks south of Oppenheimer, who took their complaints about what’s going on outside their doors to the Vancouver Police Board.

Some of the comments about the story were directed at the owners and how naïve they must be for trying to run a business in that neighbourhood. Such a comment suggests we should just accept the state of the Downtown Eastside and move on.

Anyway, I got in touch with the City of Vancouver Tuesday to get an update on their plan for Oppenheimer Park.

This is what I received from the communications department:

“Our priority is ensuring people staying in the park are connected with services, housing and other supports. We are working very closely with partners, including B.C. Housing, to take stock of housing vacancies as we move towards finding solutions for those who are experiencing homeless and have been living in Oppenheimer Park.

"Drinking water, bathrooms and waste removal services have already been made available to those in the park and we meet with representatives from the people staying in the park on a weekly basis to address the immediate life safety and health concerns.

"The number of people camping has grown considerably over the last two months, with approximately 100 tents currently in the park.”

The city didn’t answer my question as to whether an injunction would be sought to remove the campers. This would not be unprecedented, with police, city officials and park rangers using an injunction in October 2014 to clear the park.

I asked Mayor Kennedy Stewart a few weeks ago about seeking an injunction and this is what he said:

“At this point, our focus is making sure these folks have housing. There’s a wide range of options that can be pursued, and all of those have been discussed. At this point, I’m focusing on getting these folks housing, including talking with the federal government, talking with B.C. Housing, trying to see if we can get enough housing — whether it’s existing, or temporary — that we can get these folks out of the tents and into a better living condition.”

So no injunction then?

“My focus is on getting them housing.”