Our beloved sinkhole. Photo Bob Kronbauer Last year this columnist made the mistake of pointing out something weird and awesome , and the city went in and "repaired" it, effectively killing a quirky piece of Templeton Park. 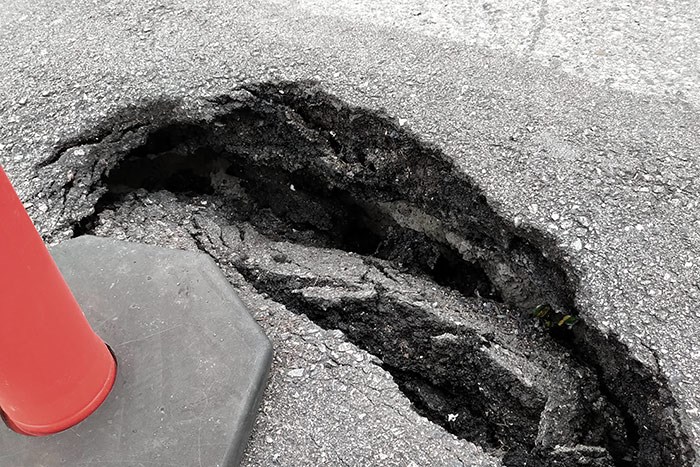 Last year this columnist made the mistake of pointing out something weird and awesome, and the city went in and "repaired" it, effectively killing a quirky piece of Templeton Park. I'm still sorry I did that.

I wrote about the "Templeton Park and Poo" sign (it's actually "Pool", but is constantly vandalized by jokers). Soon after, the Park Board went in and fixed the damn thing. It was not my intention to trigger that type of response.

Today I'd like to point out something similarly wonderful, which I truly hope the City won't move to fix.

The beloved "4th and Alberta Sinkhole" is also referred to as the "Oil Well" by locals as it's on Alberta Street outside of Big Rock brewing; an Alberta-born business. Measuring about three feet across, it has become a community gathering place in the industrial zone between the Olympic Village and Mount Pleasant. 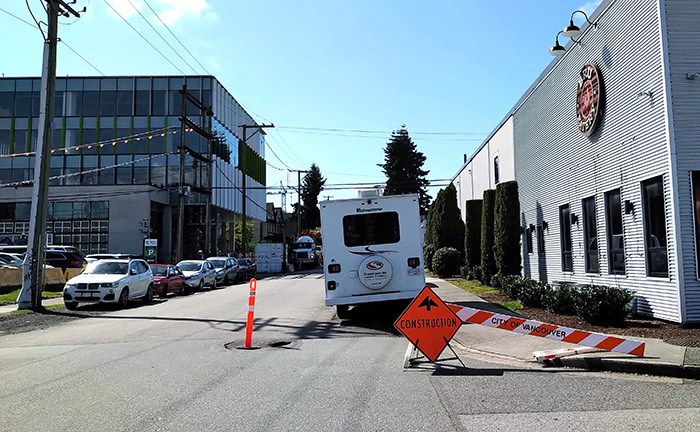 The sinkhole is conveniently located about 10 feet from the sidewalk, offering an obstacle for both pedestrians and cars. Photo Bob Kronbauer

For the past month I've been walking past it every day, wondering when the city will come in and ruin the fun of having an obstacle located mere steps from a place where people walk out of, drunk and half-drunk, from noon until late. So far it has been spared.

I asked the folks at Big Rock Brewing how many people they've heard of falling into it, or complained about the thing, and their answer was "Zero, if we don't count you".

Nobody has spoken about it in an entire month. This is good news for our expanding sinkhole! People are keeping it on the low, making sure the city doesn't catch wind of it and ruin our fun of trying not to fall or drive into the thing. 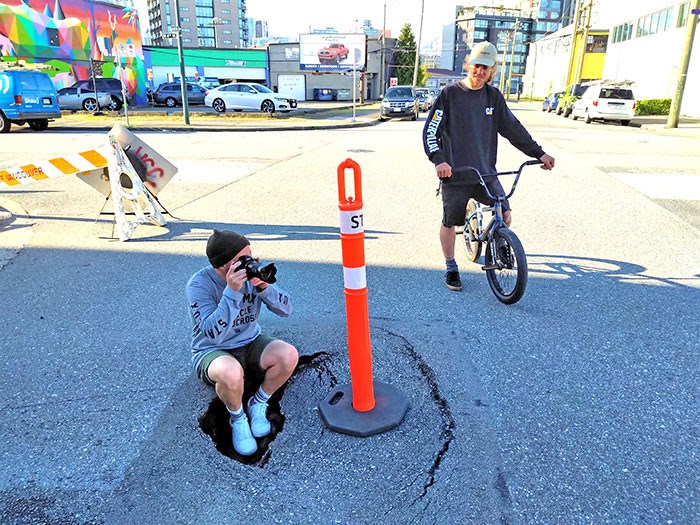 A man and his friend take advantage of the sinkhole on a sunny afternoon. The one man was doing tricks on his bicycle across the street before this photo was taken. The photographer man thought the hole was “convenient” as it offered him a place to sit, in the street, while shooting photographs. Photo Bob Kronbauer

Falling in is one thing, but getting in is another. Earlier this week I came across a man (who would not give me his name) seated in it. A BMX photographer by trade, he told me it was "convenient" as it offered him a place to sit, nearly in the middle of the street, while shooting photographs of another man who was doing BMX tricks on the barriers in the neighbouring parking lot.

So let's give three cheers for this sinkhole! But not too loudly. The last thing we'd want is for the City to come in and spoil it for everyone.

This is Vancouver's Stupidest Politics Column. Sometimes it's about sinkholes. Read the archive HERE.