With the federal election a little more than two months away, I’m firing up my election analysis looking at how different candidates are campaigning.
Aug 19, 2019 11:21 AM By: Chris Campbell

With the federal election a little more than two months away, I’m firing up my election analysis looking at how different candidates are campaigning.

I did the same during the Burnaby South byelection, which saw some pretty bizarre stuff. For example, I detailed the time that the byelection candidate for the People’s Party of Canada, Laura-Lynn Tyler Thompson, retweeted an insane video from a supposed supporter entitled, “WHAT REALLY HAPPENED AT THE BURNABY DEBATE.” The video takes a clip from Jim Carrey’s comedy classic Dumb and Dumber and superimposes the faces of Thompson and federal NDP Leader Jagmeet Singh. Thompson’s face is on the body of somebody ripping the heart out of Singh’s chest. You can see a screengrab in this column or click here to read the original and see the video.

I mention this because the Burnaby South PPC’s Twitter account has come up with a truly bizarre video clip going after Singh and other political parties. 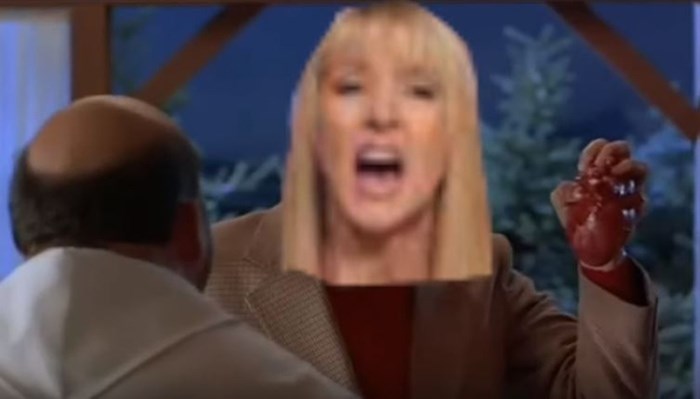 The first tweet is a retweet of a supporter who was criticizing Singh for agreeing with the exclusion of PPC Leader Maxime Bernier from the initial invitations to some televised debates. The basic argument from the Leaders’ Debate Commission is that the PPC is polling last in the country and isn’t likely to elect an MP under the party’s banner. This decision could be reversed.

The Burnaby South PPC Twitter account tweeted out this beauty: “This coming from a guy who condones communism! The only hate is from his voters of turning his back on his voters for his twisted ideology”

I’ve left out the period at the end of the tweet because it doesn’t deserve to be cleaned up. It goes along with the second sentence, which makes absolutely no sense no matter how many times I read it. It’s like listening to my drunk uncle talk politics at Thanksgiving dinner. They took a can of gasoline and set fire to any concept of syntax.

But let’s be clear – Singh is a fierce defender of democracy and any inference to the contrary is ridiculous. Not wanting a hate-monger like Bernier at the debates is a highly defensible stance.

Things really kick up a notch in the second tweet of the thread, which includes an insane video for a political party to post. The words “communists want you” is emblazoned on the top in a font a child would use when making a clip for their school’s Halloween talent show. There are also the words “be free with the PPC” – see, it’s clever because it rhymes! - and in the background is Iggy Azalea’s song Black Widow, including this phrase: “I’m gonna love ya, until you hate me.”

This would be laughable if it wasn’t so terrifying. This is a political party that wants to be taken seriously and yet produces hateful attacks using high school production values at a time when we need some sanity in politics.

Things were marginally better back in June when Burnaby North-Seymour PPC candidate Rocky Dong unleashed a silly video of him telling voters he wasn’t “Rocky Balboa” as he dons boxing gloves and awkwardly punches a bag as he yells about getting rid of the carbon tax.

It made me especially sad because it was filmed on the grounds of my old Burnaby elementary school, Parkcrest, I’m sure without the school district’s permission.

I used to play soccer on the field in the background and now that memory has been desecrated by some buffoon in boxing gloves whining about taxes.

This is all so exhausting and it’s only going to get worse. I thought things would improve in Burnaby with Tyler Thompson deciding to run in Alberta.