The Law Society of B.C. is okay with lawyers' Twitter accounts challenging people to fist fights 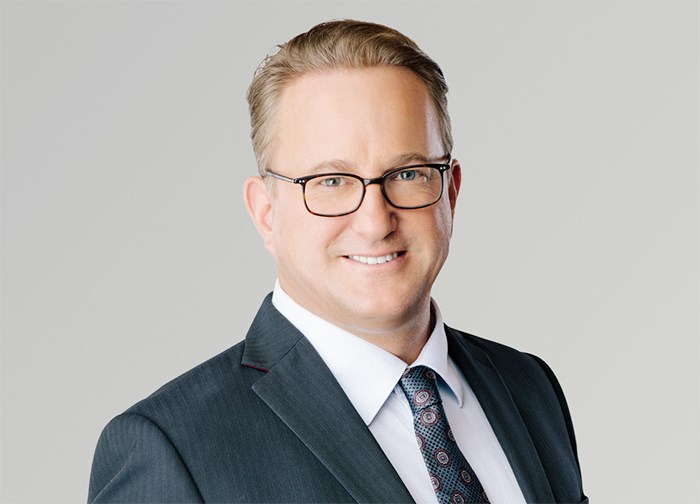 Leading up to the last municipal election in Vancouver (specifically on October 18th) some concerning tweets were directed at me from the Twitter account of a local lawyer, seemingly because of this ongoing "Stupidest Politics" column that I write.

ICBC injury lawyer Wes Mussio seemed to take issue with THIS PIECE I wrote about a protest to save the viaducts.

His wife, Penny Mussio, was one of the City Council candidates for the far-right party Coalition Vancouver who were out waving signs. 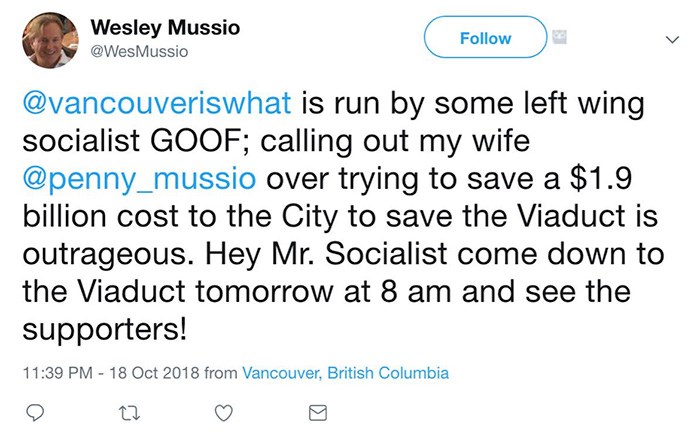 A few minutes after the first tweet went out from his account, a more aggressive one appeared.

Issued at 11:48PM, it accuses me of "writing very bad things" about his wife and other women, calls me a "GOOF," then goes a step further and invites me to a bare-knuckle "Canada style" fist fight.

I took this as meaning that the author wanted to kick my ass, as they hoped to set a date for us to "fight." 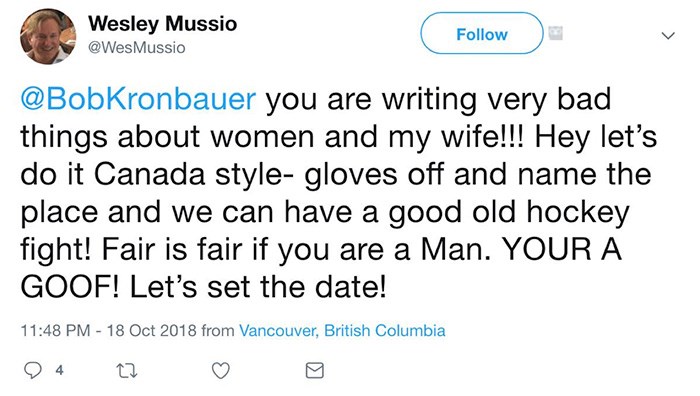 Shortly after these tweets went up, I filed a complaint with the Law Society of British Columbia. That's the organization which is supposed to make sure lawyers aren't being untoward in their conduct, and that they're not generally making people within the profession look greasy.

Six months later - just yesterday - I got a letter back from them, letting me know what they decided to do about their member's apparent actions.

They've decided to do nothing.

In his response to my complaint, Wes Mussio claimed that his wife, candidate Penny Mussio, was offended by "sexist" comments I had apparently made about her. He said that she had been on the receiving end of some "creepy" tweets from unnamed parties in the past and had decided not to tweet from her own account any more.

So, ICBC injury lawyer Wes said, she took to his Twitter account. To challenge me to a hockey fight. In his name.

Penny Mussio corroborated his account, saying that she authored the tweets without her husband's knowledge. The Law Society determined that this was the end of the matter as far as they're concerned.

Erin Berger, Staff Lawyer, Professional Conduct for the Society wrote in the decision to do nothing that "The only evidence concerning who actually wrote the tweets is from the Mussios who both state it was Ms. Mussio who wrote the tweets without Mr. Mussio's input or consent. Ms. Mussio is not a lawyer. Given this evidence, this complaint is outside the jurisdiction of the Law Society and it does not allege facts that, if proven, amount to a discipline violation."

The Law Society has seemingly just set a new precedent for their members: as long as you've got someone to say they authored inflammatory tweets sent out by your personal social media accounts, you won't be held accountable for the content of them, regardless of what that content might be.

So have at it, lawyers. Log in to your Twitter accounts, hand your phones over to your spouses, children, other relations or even random strangers and give them the Twitter handles of people you have an axe to grind with (I'm @BobKronbauer if you'd like a ready-made target). Allow them to call them names. Allow them to author tweet storms making them feel physically unsafe. The Law Society of British Columbia says it's not within their jurisdiction to make sure that doesn't happen again.