The takeaway? Wear a mask and make a reservation.

As the COVID-19 pandemic rages on, public health officials continue to encourage British Columbians to embrace the staycation this summer.

It's not exactly a hard sell, not just because of the mounting case numbers south of the border, but because there's no shortage of incredible places to explore right here in our own backyard. Honestly, who would want to go to Ontario or any other province right now, when you could head to an island, to the mountains or to wine country? (Stay tuned for an answer to that question next week...)

However, many of those places require a ferry to get to.

En route to a multi-day paddleboard camping trip on the Sunshine Coast with a few friends over the weekend, I hopped aboard one of BC Ferries' vessels for the first time since the COVID-19 pandemic struck. If, like me, you're curious to find out what travelling on a ferry during a pandemic entails before driving into the terminal, I thought I'd share my experience here.

I should note that while our ferry over to the coast set sail prior to the company's implementation of its new mandatory masks rule, our trip home took place on Wednesday, two days after that rule went into effect. 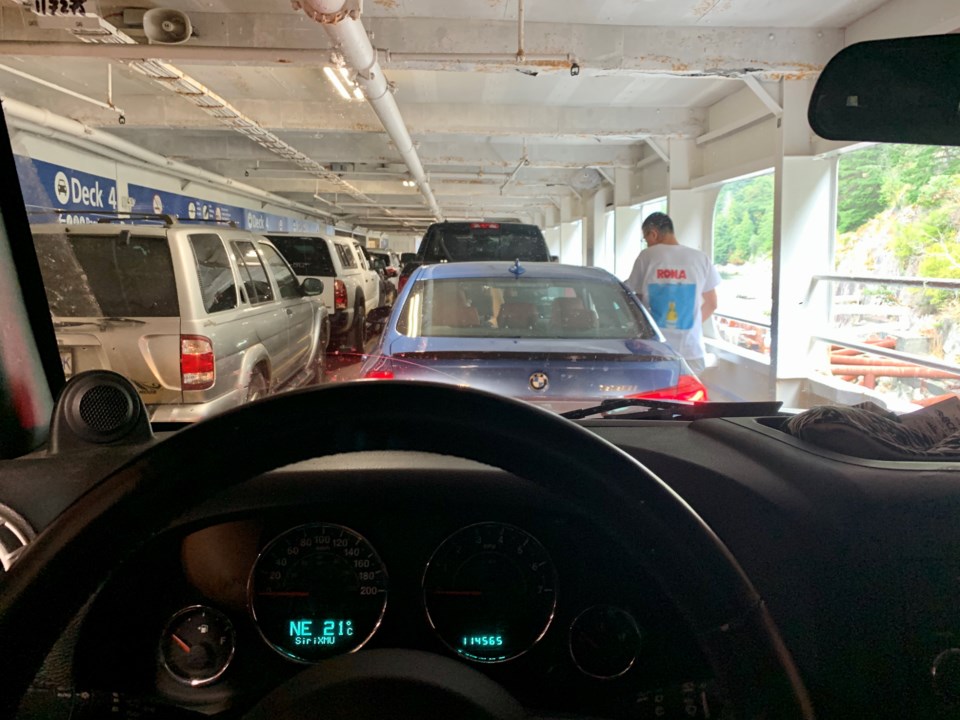 Masks and other pandemic protocols

BC Ferries' COVID-19 protocols begin when you first pull up to the ticket box. There, an attendant pointed to a laminated list of COVId-19-related information (I'm just assuming here, it was a little far away to read) and asked if we were all feeling well or exhibiting any symptoms.

From there, most of BC Ferries' messaging took place over the loudspeaker. While there was no mention of masks that I can recall prior to our trip over, while waiting for our return trip, a voice over the announcement system continued to remind travellers every few minutes that they must wear a mask while aboard a ferry or waiting at a terminal, except for when seated in vehicles or while eating or drinking. Most people who weren't in their cars were covered up, even before it was mandatory.

Impressively, while walking across a passenger deck during our return trip, a staff member also reminded my friend to adjust her mask so it covered her nose, after it slipped without my friend noticing.

Moving around the boat

Once aboard the ferry, announcements over the loudspeaker encouraged passengers to remain in their cars if possible. However, other subsequent messages explained that the boat's gift shop, Passages, was open, and encouraged travellers to visit. With BC Ferries losing millions in revenue due to the pandemic, I'd hazard a guess that this mixed messaging probably has a little something to do with finances.

On our way over, we decided to take the initial announcement as a suggestion, tossing on our masks and heading for the upper passenger decks. Honestly, with cars parked together as closely as they were, virtually no one wearing masks in their vehicles, most windows open thanks to the day's warm temperatures and a seriously questionable playlist blaring from the neighbouring vehicle,  I felt it was easier and more comfortable to maintain physical distancing outside in the fresh air rather than safely sweat it out with my windows rolled up. Also, I was curious to see what was going on up there. 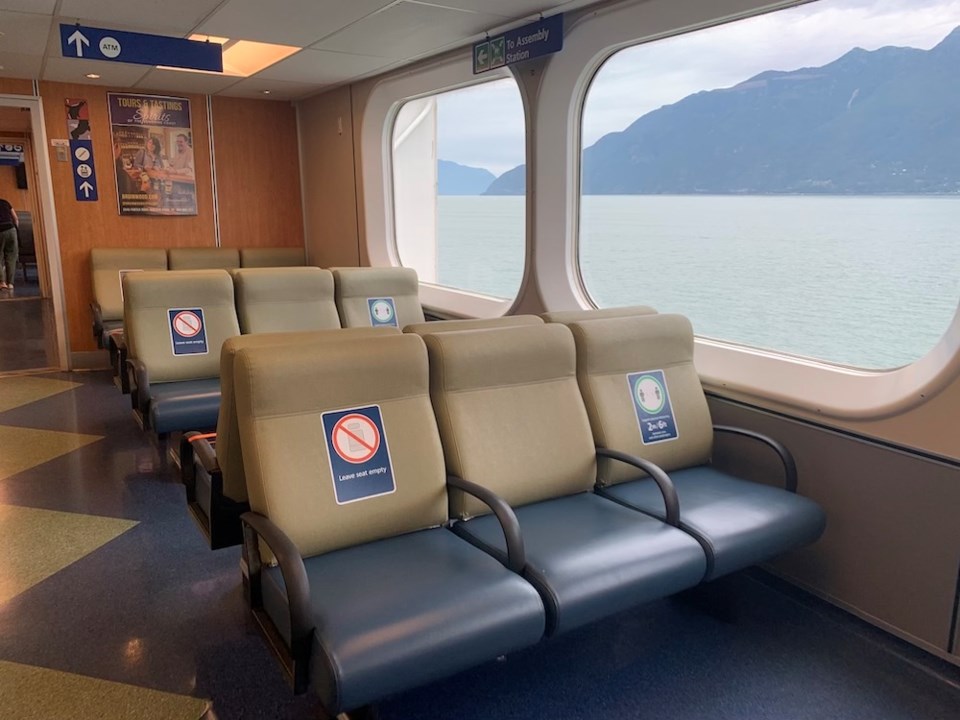 Signs posted beside elevators asked for only those in the same household to ride together. Once we arrived at the passenger decks, we found every other row of seats were taped off, with signs designating which seats or stools were available for use. The kids' play area was closed, as were any food service stations. People generally seemed to be doing a pretty good job of keeping their distance from others. (We avoided the gift shop, if you're wondering). 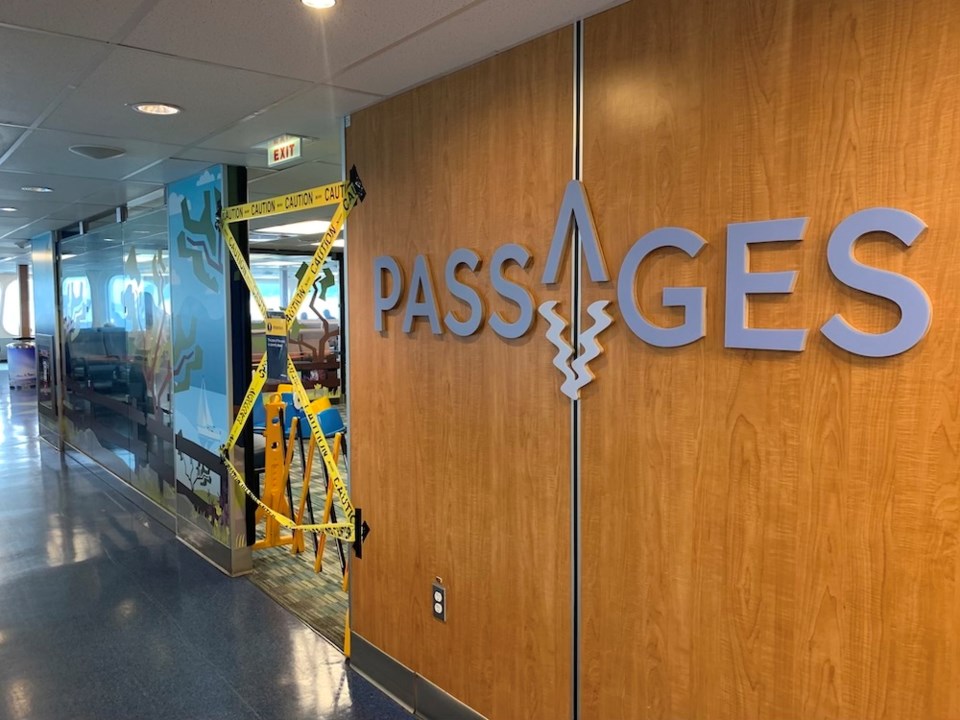 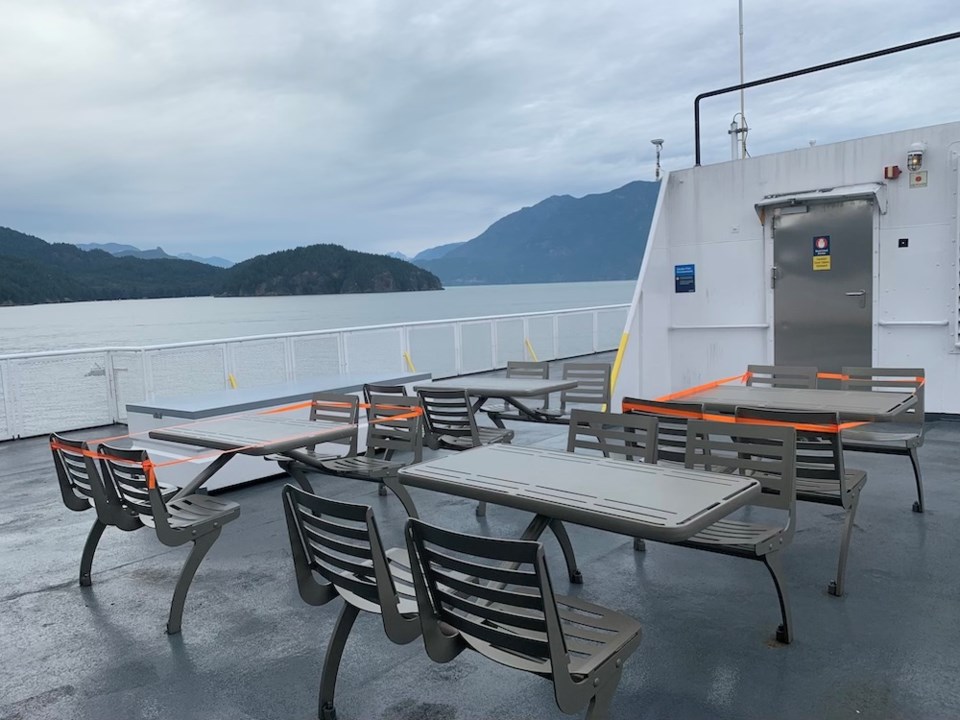 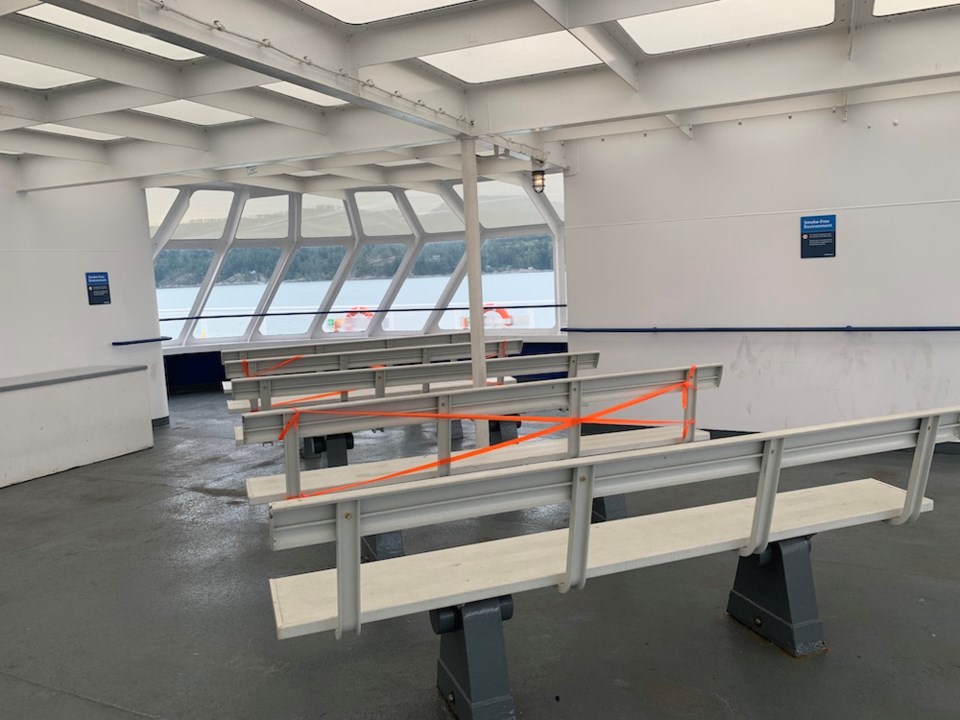 
On the way back, we were parked on the window-less bottom deck. Once again, we threw on our masks and decided to head up for some air, only to find the ship's cafe was open and had resumed food service. Again, keep in mind this was two days after BC Ferries began mandating that all passengers wear masks, rather than just recommending it. Sunburnt and exhausted after several days of paddling for hours and sleeping on thin blow-up mattresses, topped off with a pretty gnarly wait for our return ferry (read more on that below), we were more than stoked to be able to grab coffees without heading through a drive-through on the mainland.

Line-ups for food were subject to the two-metre rule, while all service areas appeared to be outfitted with plastic barriers. There were signs reminding passengers to only grab items they intended to buy, and hand sanitizer available throughout the boat. 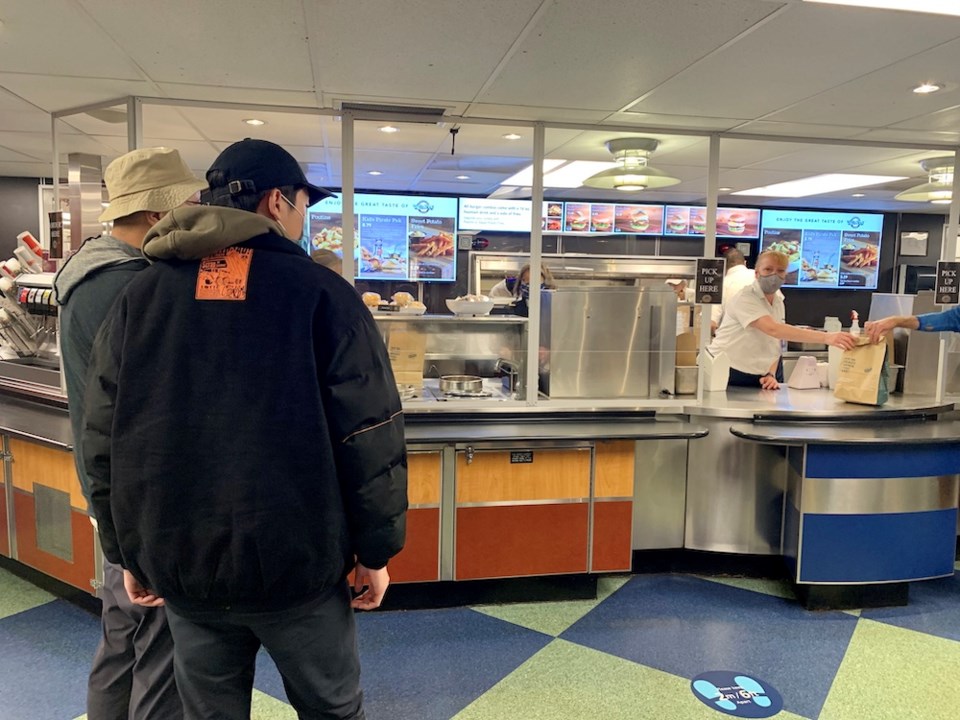 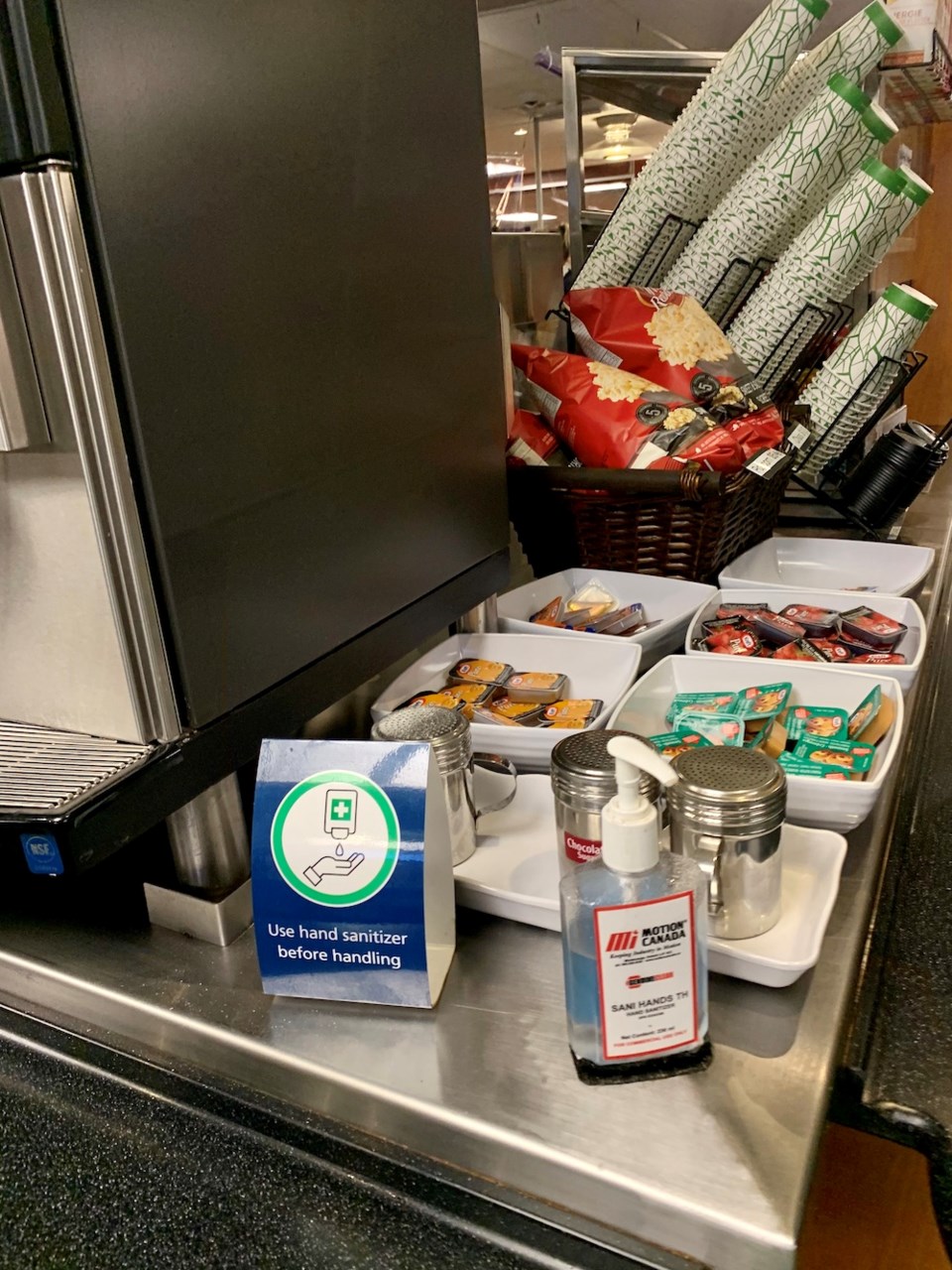 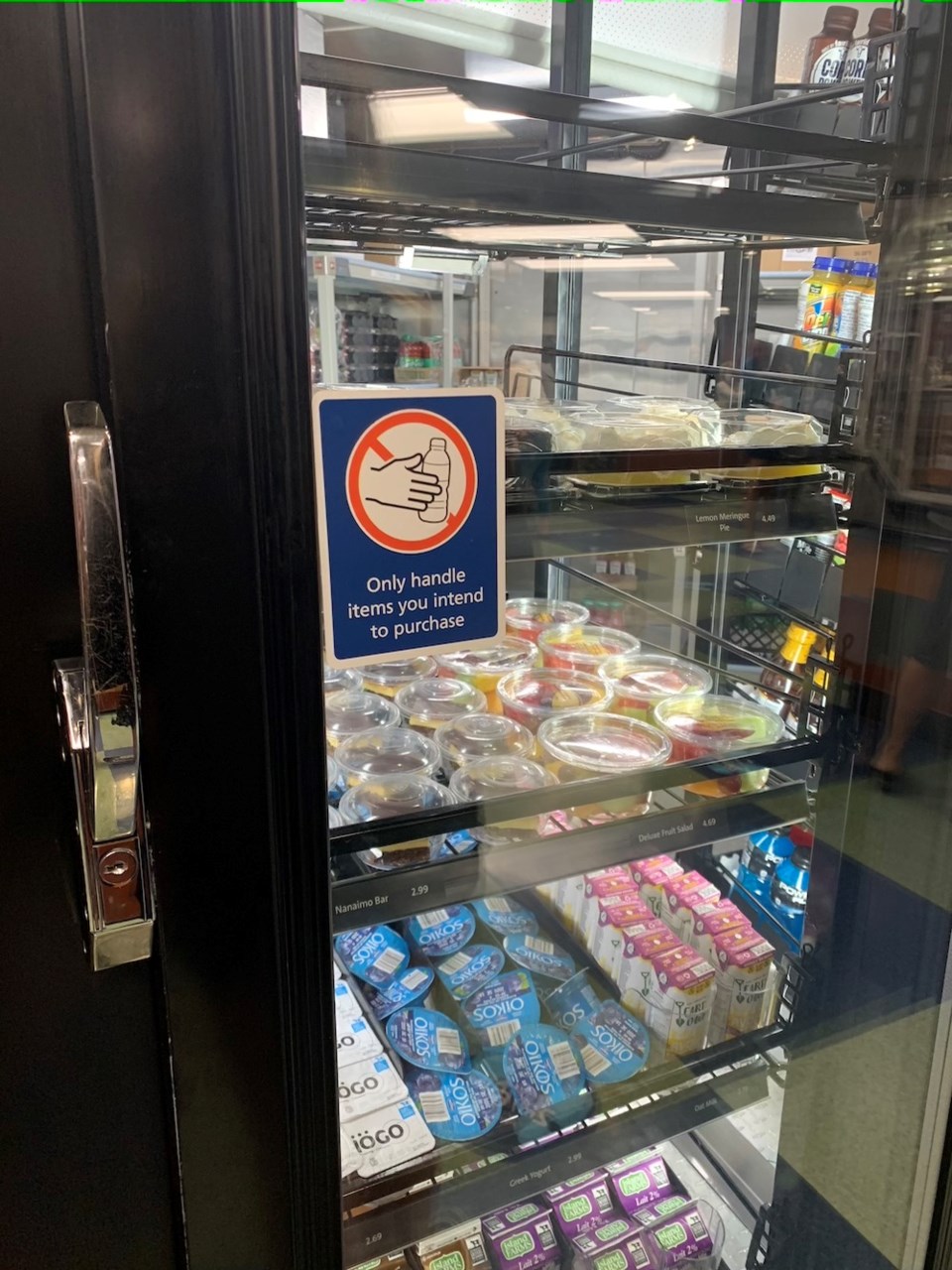 A few days prior to leaving for the trip, we attempted to make a reservation after hearing enough horror stories of extra-long wait times, but found all the available Horseshoe Bay - Langdale bookings for our departure date were already taken.

Not that we had many other options, but we decided to take our chances, keeping an eye on BC Ferries' current conditions web page while running a few last-minute errands to see how quickly the ferries were filling up. We ended up pulling into Horsehoe Bay nearly an hour before our preferred departure time. As we were approaching the terminal, the current conditions page was listing the afternoon sailing we were aiming for as about 65 per cent full, so we were feeling pretty confident.

The way back was an entirely different story. After landing a spot on the sailing we wanted without a shred of stress just a few days earlier, we were entirely unconcerned about making it onto Wednesday's 5:55 p.m. sailing without a reservation.

So​ unconcerned, in fact, that the conversation while driving through Sechelt around 4 p.m. went a little something like this:

"Should we stop at Persephone to fill our growlers? And maybe grab food in Gibsons first?" ​​​​

Joke's on us, because by the time we passed Roberts Creek, over an hour and a half before the vessel's scheduled departure time, BC Ferries' current conditions page was listing that sailing as 98 per cent full.

After a hasty stop at the brewery (I mean, we were already relegated to the 8:15 p.m. sailing anyways), we pulled into the Langdale terminal and settled in for a fairly long wait. We kept checking the current conditions page out of curiosity - it said the 8:15 ferry was full by around 5:30.

That wait was extended even further when both of the already-overloaded sailings were delayed by about half an hour. This may or may not have led to us sitting on the concrete and firing up a camp stove in the middle of the ferry lineup, but hungry people aren't exactly known for their good decision making. Desperate times.

Overall, I found travelling by ferry to be a pretty safe option. Aside from limiting the amount of passengers allowed on its vessels at once - which would only worsen wait times - it seems BC Ferries has implemented all the necessary protocols to keep its guests and staff safe. As long as you have a mask, some hand sanitizer and some entertainment options handy, I'd say it's a pretty comfortable and stress-free way to travel these days, all things considering. And in case it isn't already obvious, I'd suggest making a reservation in advance.

Opinion: How to teach children about climate change, inspire hope and take action to change the future
Jan 27, 2022 3:11 PM

Opinion: The death of caremongering: Canadians are tired and most believe getting COVID-19 is inevitable
Jan 27, 2022 9:55 AM
Comments