Let's be frank: We were weenies for falling for the Wienermobile prank

When someone in the lower mainland purported to have an iconic Wienermobile for sale on Craigslist, let's just say we really wanted this listing to cut the mustard. But we ended up being the weenies here.
Jun 17, 2019 1:02 PM By: Lindsay William-Ross

Sometimes in life, you land on something online that just makes you say "Hot dog, this is awesome!" Well, that was definitely the case earlier this month when I landed on a link to a Vancouver Craigslist posting purporting to be selling a legit Oscar Mayer Wienermobile. Frankly, that's the kind of story we really relish here at V.I.A.

For those who are wondering "doggone it, what are they talking about?" a little refresher: A poster out of Mission claimed to have a 1991 Wienermobile bought at auction in the U.S. by a relative with the intent of turning it into a camper, but now seeking to offload it online for $7000. "Starts and runs good. Gas engine. Could use some new tires." 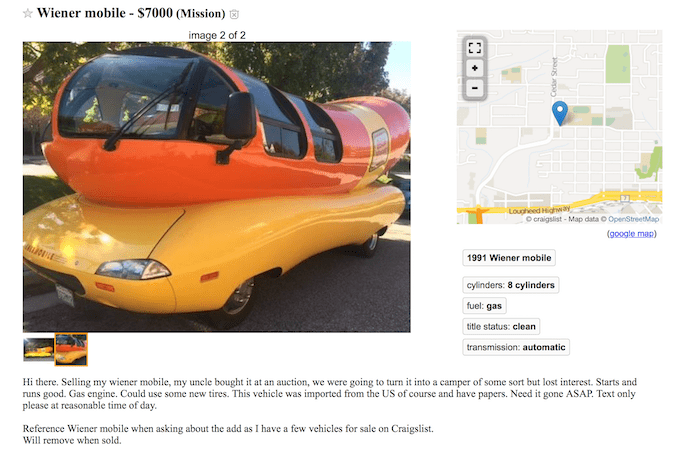 The posting concludes with a request for texts only, "at reasonable time of day," and to specify "Wiener mobile" when inquiring, as they have "a few vehicles for sale" on the site.

Now, since we all know Craigslist is the dwelling place for any given city's most truly honest folks (wink, wink) a listing like this Wienermobile one has to be taken with a grain of salt. And I've been burned by Craigslist fakers before; at another publication I wrote about someone selling Kevin Spacey's "breath in a jar" (before Kevin was persona non grata in Hollywood) and even interviewed the seller before the truth came out that it was a stunt by a local radio station to see if they could make something go viral.

But back to the Wienermobile. Let's just say, we really wanted this listing to cut the mustard.

We assembled a post, and reached out to the seller, who (unsurprisingly) didn't respond.

We were soon tipped off to another item on the web that turned things on our end from good to wurst: Someone had recently roasted a pal by - get this - posting a Wienermobile for sale on Craigslist in California, and sending the text inquiries to that buddy's cellphone. The trouble was, that article pre-dated our very own local Wienermobile poster.

So did we have a copycat hot dogger on our hands? Did reality finally ketchup with us?

It would appear so. 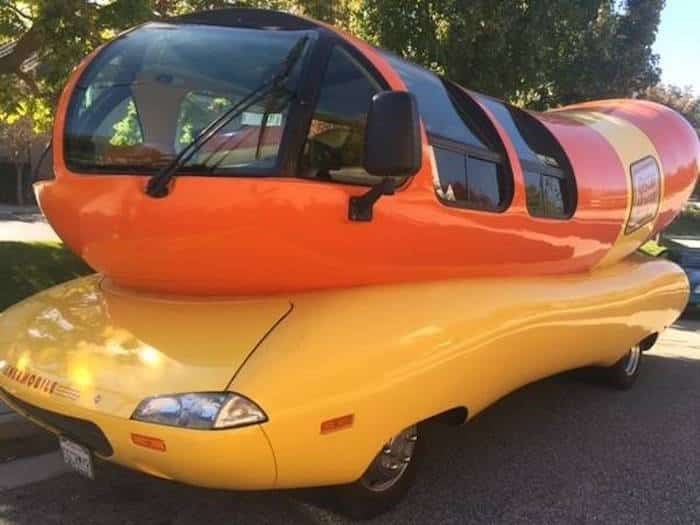 As it happens, the Wienermobile has a rather fascinating history in American pop culture. The company first launched the hot dog on wheels as an advertising tool in 1936, and the Wienermobile has gone through a few iterations over the decades (check some images of them here), but there was never one produced in 1991. Currently there are six Wienermobiles travelling around the U.S., and they are all owned by Kraft Heinz, who are the parent company of Oscar Mayer.

All this is to say that while we can't prove that our guy in Mission here did not have a Wienermobile for sale, the fact is, there aren't any 1991 Wienermobiles out there that had been put up for auction, and we'd have known that if we weren't the kind of weenies who didn't do enough digging before falling for something sketchy.

We're writing this mea culpa (meat-a culpa?) in part to say sorry, but to also let you get a glimpse at how the sausage is made. Or in this case, how over-eager one-offs about quirky hot dog-themed Craigslist postings are made. Like a chili dog, they can be messy. So let us pass you a napkin, with our apologies, for handing you something kinda sloppy. Our buns have been duly spanked.

Now go take a deep dive on the Wienermobile's Instagram page. IT'S SO DARN CUTE!