Have you been following the municipal election campaign closely? If not what you're missing is a heated race between incumbent Mayor Gregor Robertson from Vision Vancouver and the NPA's Kirk Lapointe, with COPE's Meena Wong having a fairly strong sho

Have you been following the municipal election campaign closely? If not what you're missing is a heated race between incumbent Mayor Gregor Robertson from Vision Vancouver and the NPA's Kirk Lapointe, with COPE's Meena Wong having a fairly strong showing. The Green Party looks to be squeaking in some more councillors in a strategic game where they're not running a mayoral candidate. HERE and HERE are polls from mid-October to back up those basic statements.

So what issues matter to you, and who do you think will make a difference running your city? Do you think Wong's plan to get every person of working age in Vancouver to buy an annual transit pass to fund cheaper transit for all of us ($30/month) is feasible? Do you agree with Lapointe when he says medicinal marijuana stores should be regulated, and do you believe him when he says he's the guy to get us rapid transit along Broadway? Do you think Robertson can really end street homelessness by 2015 even though it's hovering around the same level as it was when he first promised to do that 3 years ago, and is homelessness even an issue you care about? These are just a few of the things you may have missed if you haven't been following. It started out a bit dull but it's getting interesting in these last couple of weeks leading up to the big day, November 15th. 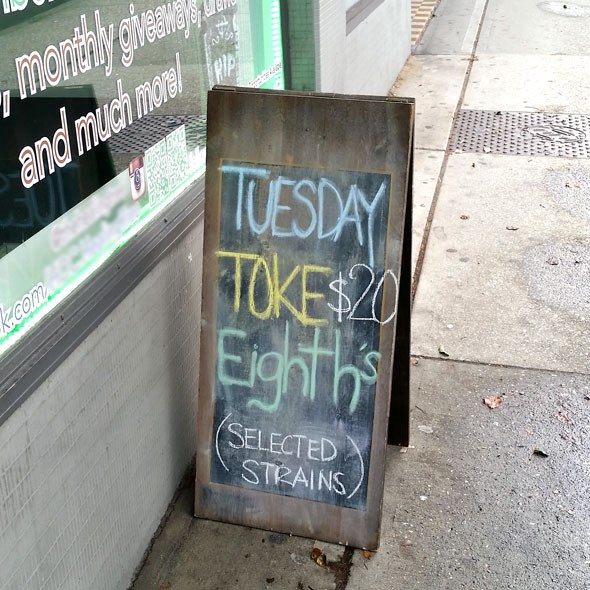 This sandwich board for a dispensary on Broadway shows a smokin' deal every day of the week. Across the street is a bar that's not allowed to sell beer for less than 20 cents/ounce

Clearly V.I.A. isn't the source for you to learn about the election and get informed on the pressing issues and what the candidates for mayor, council and park board have to say. Lucky for you there are a bunch of great reporters covering city hall, and below are 4 of the most engaged and insightful ones that you should follow on Twitter, then read in their respective papers. Each of them has their own take, and they're all fair. Following all 4 should give you a level look at where to put your votes come November 15th.

Frances Bula from the Globe and Mail - @fabulavancouver

Mike Howell from the Courier - @howellings