B.C. residents took advantage of being able to cast their federal election advance ballots over the holiday Thanksgiving weekend, joining Canadians across the country.
0
Oct 15, 2019 12:34 PM By: Times Colonist 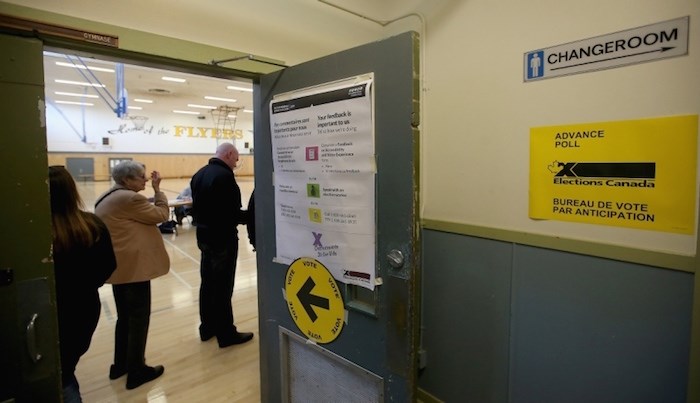 Advance voting for the federal election at Lansdowne Middle School in Victoria, B.C. on Oct. 11, 2019. Photo by Adrian Lam/Times Colonist

A steady stream of B.C. residents took advantage of being able to cast their federal election advance ballots over the holiday Thanksgiving weekend, joining Canadians across the country.

Elections Canada said about two million voters cast their ballots in the first two days of advance voting, a 25 per cent increase from the same period in the 2015 federal election.

The numbers reflect an emerging trend to vote early. The last federal election reported a 71 per cent increase in advance voting from the 2011 election.

In response, Elections Canada this year opened more advance polling stations, and kept them open longer — 12 hours a day, from 9 a.m. to 9 p.m. Friday to Monday.

On Monday, many Greater Victoria voters arrived at polling stations in good spirits with memories of Thanksgiving dinner still fresh on their minds.

“It’s just so convenient to have multiple days to vote,” said Shawn St. Jean. “We literally just walked in and voted.”

He was accompanied by his wife, Olga Netchaeva, and daughter Stella, 4 1/2, who had a great time on the slide at the playground of Cloverdale Elementary School on Quadra Street, their usual polling station.

St. Jean said that he had voted for the NDP, a choice he has made before. “I find that I identify with their values and find their policies fairer. I also support the party’s stance on First Nations issues and the reconciliation process.”

People sometimes faced waits of nearly an hour on Friday due to a lack of voting booths, said readers who wrote to the Times Colonist about their experiences.

Those concerns played on the minds of Brian and Ann Collins, who are in their 70s. Brian is in an motorized wheelchair and was concerned about having to wait in the rain.

Fortunately, Monday morning was just overcast and there were no lineups at the polling station at the Trafalgar Pro Patria branch of the Royal Canadian Legion. “There were only two people ahead of us,” said Brian. “It was really fast.”

Ann praised the polling station workers. “It was difficult for Brian to manoeuvre his chair to the polling booth, so the volunteers brought the booth to him instead.”

For some people, this was their first time with advance voting.

“I just love it,” said Diane Houston. She went in to vote with a clear idea of her candidate and party.

“I was very impressed with Jagmeet Singh’s performance at the debate,” said Houston, who is retired. “While I love Elizabeth May, the NDP presented a solid middle ground for me, especially with his stance not to form a minority government with the Conservatives.”

People interviewed didn’t seem too worried that another week of campaigning would change their minds.

“I was pretty set on who I would vote for,” said Ronella Mitchell. “I only saw one person doing door-to door campaigning, which was fine because it would be a waste of time to listen to more.”

While she did not watch the national debates, she listened to a local-candidates debate on radio that answered her questions as well as being “quick and painless.”

While some voters mentioned that electronic voting would be more convenient, especially for those who with mobility challenges, others weren’t so sure.

“In this age of the internet, it is indeed easier to get information — I can watch the debates at any time,” said Shalvenie Singh. “However, I believe that the manual system still has more integrity after seeing how electronic systems can be influenced. Doing it manually may be old school and more work, but it’s trustworthy.”