The three-term councillor discusses her exit from city hall
Glacier Media
Oct 27, 2017 11:20 AM 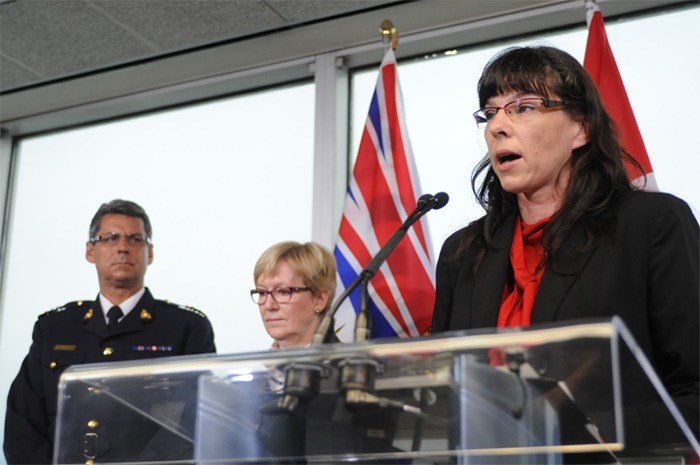 Vision Vancouver Coun. Andrea Reimer announced Wednesday she won’t seek re-election in next year’s municipal election. She dismissed rumours that she will run for mayor as an independent candidate. Photo Dan Toulgoet

But when she came to the decision, whether she’s done with politics and whether she believes Gregor Robertson will really seek a fourth term as a mayor are questions she did not answer in her post. She did, however, respond to those questions and others in an interview Thursday with the Courier.

Here’s an edited and condensed version of that interview.

Why are you not seeking re-election?

Last December, I took some time off with my family. We took a train ride across the country, from Los Angeles to New Orleans. We had time together, my phone wasn’t ringing because I had it turned off. I don’t know how to explain it, but it became clear to me that it was the right time to go — that I personally needed that reflective space. Weighing off on the other side was the question of, ‘If I did another term, could I get substantially more done than I have done?’ And I just didn’t see a yes answer there. And I see all of these people I have worked so hard to give a voice to, ready to speak.

So you decided almost a year ago. Why did it take until Wednesday to publicly announce your decision?

I would have preferred to announce in July at the end of the last session at council. But circumstances with Geoff Meggs leaving and an upcoming byelection, I didn’t want in any way to overshadow or impact the people running in that byelection.

Over the last year or so, you have been mentioned as a possible successor to Gregor Robertson. Does the mayor’s decision to seek a fourth term have anything to do with your decision?

No, those rumours have never been started or encouraged by me. I appreciate the value of having a fantastic mayor and I’ve very much appreciated the one we’ve got, but it’s never been my interest in life to be that person. I agreed to give it a fair shake the year I was deputy mayor, and on balance, there’s lots of things the mayor does that are not well suited to my skill set.

Rumours coming via Twitter suggest you will run for mayor in 2018 as an independent. What’s your reaction?

Sorry, let me control my emotions on that one and try not to start laughing hard. It’s not my intention to run for mayor with any entity or non-entity. I get why people think mayor is a very important position and why one should want it. But you know where I come from. Just having the title “councillor” has been a hard thing for me to reconcile. I don’t aspire to be a mayor.

Mayor Gregor Robertson has said repeatedly that he will seek a fourth term as mayor. But pundits, city hall watchers and some politicians doubt he will. Are you confident he will run again?

My observation of Gregor is that when he says something, it’s because he means it. I’ve never taken his words on any subject as coy or contrived. It’s not his nature. If he’s saying that, it’s because he believes that to be true.

As you’re well aware, Vision’s council candidate in the byelection, Diego Cardona, finished fifth. Did Vision’s poor showing in the race have anything to do with your decision to not seek a fourth term?

No, not at all, although it’s funny because I was thinking, “Had Diego won, would have that impacted my decision in another way?” That has actually weighed on my mind a bit. Would I have held true to my beliefs that it was time to get out of the way, or would I have felt compelled to be like den mother for Diego, or whatever? It’s my intention to help this next generation — if they want me around to do it — to support them to be the best councillors they can be.

Your reaction to a good showing from independent Jean Swanson and “progressive” candidates such as Pete Fry of the Green Party and Judy Graves of One City?

It did confirm a lot of what I felt about where the public’s at, where the parties are at, where progressive politics are at, where this iconoclast challenge is at. The one thing that did surprise me is how low the NPA’s vote was or, maybe more importantly, how large the body of voting was behind progressive ideas — candidates who were expressing progressive ideas. But the thing about a byelection [where only 11 per cent of voters cast a ballot] where there’s no majority or anything at stake, I had felt from day one that this was the perfect moment for people to punish you for everything they didn’t like.

Are you done with politics?

When I was younger, I was really good at definitive statements. But I can’t really say that [I’m done with politics]. I’m very invested in transformative changes that make life better for people, particularly the people that have been so hammered by income inequality, by environmental degradation and by what I would consider echoes of colonization — loud thunder clap echoes. Politics is a place you can make those changes.

I don’t speak on behalf of the party, I speak as someone who runs with the party, works with the party, is very grateful to the party for what they’ve done to unite people behind these big Vision ideas over the course of time. In my opinion, they’re just getting started. It was a formal party in 2005 and 12 years later it would be expected to see the first generation — I would hope — to start to look at what’s next and to bring in the next generation. Diego running in the byelection was, to me, a very strong repudiation of that. It’s exactly how political parties grow and thrive.

What’s the best part of being a city councillor?

I really, really love the on-the-ground work in communities. It’s meeting people where they like to meet and where they gather, and hear what they talk about. Being invited into those spaces has been a real privilege for me – and then being able to connect people, being at a level where you can make those connections and bring people together who might not otherwise have met.

Worst part of being a city councillor?

I’m very much finding there is trend towards dog whistle politics by elected officials and various other places it’s coming from. It’s the opposite of connecting communities, where your heart is full and you feel everything is possible and you’re breaking bread, or roti or tortillas, or whatever it is. It’s the opposite feeling. It’s like having your heart implode on itself every time there is a personal attack on reason. Without reason, democracy doesn’t work.

Have you got another job lined up for when you leave?