Would Biden-Harris be good for B.C.? 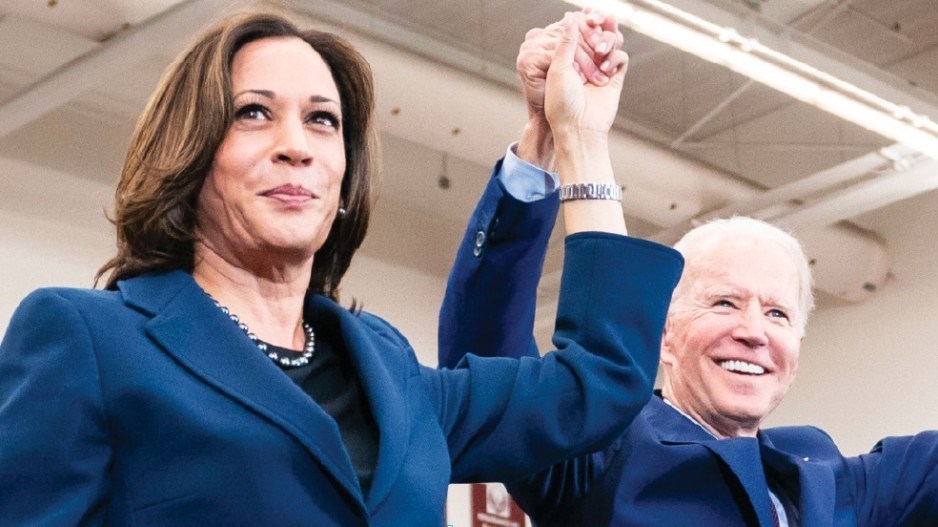 Former American vice-president Joe Biden’s fondness for the world stage stretches back to his days in the U.S. Senate, honing his credentials as chairman of the upper chamber’s foreign relations committee.

“There is not very much foreign policy that requires new legislation. Most of it is the positions the president takes and can change quite rapidly,” said Quirk, the Phil Lind chairman in U.S. politics and representation at the university.

“The positions that Biden would want to take are ones that are already conventional and well understood within the bureaucracy, so he wouldn’t have a great deal of trouble getting support and detail work done in order to accomplish it.”

The dynamic between Prime Minister Justin Trudeau and U.S. President Donald Trump has been bumpy, with Trump visiting Canada just once during his presidency.

It was immediately after the G7 meeting in Quebec that Trump took to Twitter to call Trudeau “dishonest” after the latter described American tariffs on Canadian aluminum and steel as “insulting.”

The Trump administration had claimed it was instituting the tariffs over national security concerns.

“A Biden presidency would eliminate the extreme hostility toward trade that has inconsistently driven Trump’s policies,” Quirk said. “That kind of severe anti-Canadian policy would never occur [with Biden].”

But Canadians may wish to recall that Canada-U.S. relations have been tense in the relatively recent past, said Simon Fraser University political science professor Andy Hira.

The senior Trudeau rankled American politicians over positions on the Vietnam War, the dollar and his friendship with former Cuban prime minister and president Fidel Castro.

“But I can’t remember it being this bad,” Hira said. “I would have to say this is probably the nadir.”

He added that a potential Biden presidency would coalesce more with the Trudeau government’s policy agenda with more American investment going into innovation and technology and more aggressive efforts aimed at hitting climate-change targets.

“That has the potential to really benefit Canada if we’re geared up for it,” Hira said.

One of the biggest questions, he said, facing the post-COVID-19 world economy will be how Western democracies deal with challenges from China as it pursues production of more advanced industrial goods.

“This is really under question, and unless we take a much more proactive policy towards this, we’re going to have a tough time competing in the long run,” Hira said.

“Our governments are not nearly proactive enough to seize the opportunities that the new green economy and that the new IT and tech economy afford us. And if we continue to be complacent, I think we’ll end up in second place or farther behind in all these new industries.”

The Trump administration has been as aggressive with Beijing throughout its first term as it has been with other major trading partners.

But its strategy has been mostly unilateral, while middle-power countries like Canada and Australia have also found themselves going at it mostly alone after finding themselves in the cross-hairs of China over trade, technology and the future of Hong Kong.

But Trump has mostly eschewed a multilateral approach that would enlist allies, instead favouring an isolationist bent.

Quirk said he does not see that changing if Trump were to win a second term in office.

“Trump is incapable of a kind of systematic or considered strategy revision in foreign policy. He appears to becoming more disorganized and resentment-driven in his public positions. If there’s a second Trump term, I don’t see any reason to expect anything other than further descent into chaos.”

Horgan officially calls provincial election for October 24
Sep 21, 2020 11:27 AM
Comments
We welcome your feedback and encourage you to share your thoughts. We ask that you be respectful of others and their points of view, refrain from personal attacks and stay on topic. To learn about our commenting policies and how we moderate, please read our Community Guidelines.