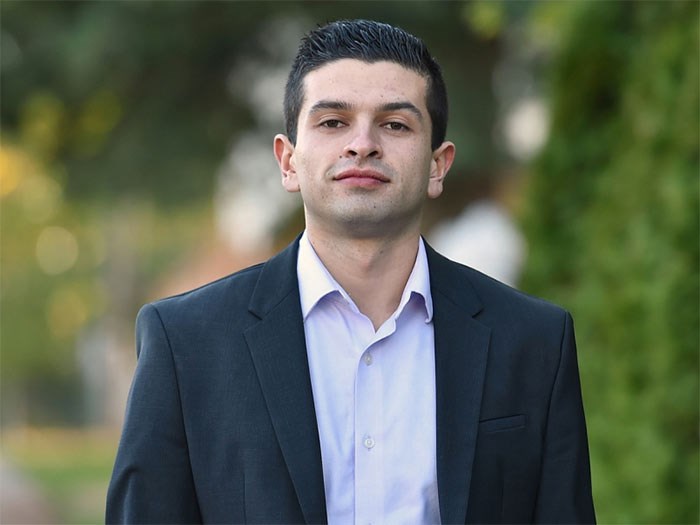 Diego Cardona knew the race to fill the vacant Vancouver city council seat would be tight but he didn't predict he would finish fifth out of nine candidates.

The 21-year-old Vision Vancouver candidate said Wednesday in a post-byelection interview that several factors likely contributed to his loss at the polls Oct. 14.

Cardona cited vote splitting among the left-of-centre candidates and parties, voters' disillusionment with the city hall-ruling Vision and residents angry about the high cost of housing.

There was also, he pointed out near the end of his 30-minute interview with the Courier, racism directed at him at political events, the doorstep and on social media.

"It was really strong," said Cardona of the racism. "I don't know if that made a difference between me placing fifth or third or second, but if we're just going through all the factors here, I think that was also one of them."

Cardona arrived in Canada when he was nine years old. He fled Colombia with his ailing mother and sister after his father was murdered by guerilla forces. His mother later died of leukemia and he and his sister spent time in the foster care system.

That narrative of Cardona's life was featured in his campaign material and well told by media in the days leading up to the byelection, which the NPA's Hector Bremner won with 13,372 votes. Cardona finished with 5,411.

Overall, Cardona said, the results showed him that he and his party clearly have more work to do in making Vancouver a more affordable place to live.

Voters, he continued, want the Vision-led administration at city hall to be bold in creating affordable and social housing. They want politicians to be "fierce advocates" when lobbying the provincial and federal governments for housing and programs for low-income and average-income people.

"It was clear that we need to re-think a lot of things as we look ahead to 2018 [general election]," said Cardona, whose one positive takeaway from the results was the support for "progressive" candidates and parties.

He considers Vision, which has ruled city hall since 2008, a progressive party. The candidates he was referring to are second-place finisher Jean Swanson, who ran a "tax the rich" campaign, Strathcona community activist Pete Fry of Greens and the city's former homeless advocate Judy Graves of the OneCity party.

Cardona said he would be open to a coalition of progressive candidates and parties banding together before the next election to stop the NPA from returning a majority to city hall. Vision has done this in previous elections with COPE.

"Our message throughout the campaign was always about the importance of uniting progressives to stop the NPA," he said. "So I'm not about to change that message, post election. But there has to be a willingness from other players to do such a thing."

Right now, he acknowledged, that could be difficult to do because the progressive candidates targeted Vision during the campaign for not addressing homelessness, the high cost of rents and lack of affordable housing.

"My hope is that post-election we can turn down the rhetoric," said Cardona, pointing out the price of housing and rents cannot solely be controlled by civic government, although the city's new housing strategy points to programs to tie incomes to new developments.

The abysmal 11 per cent voter turnout for the byelection and the fact that much of Vision's base didn't vote are two other factors Cardona discussed.

For Bremner to tell the Courier byelection night that "Vision is done," when there was such a low voter turnout, is a questionable conclusion, said Cardona, noting almost 400,000 eligible voters didn't cast a ballot, many of those Vision supporters.

"That's overblowing the results — we're definitely not done," he said. "But we also need to figure out why some of our loyal supporters decided to stay home."

To those civic politics watchers and pundits who said Vision "threw me under the bus," Cardona said he was well supported by the party and will likely run again in the next election.

"The party was invested in the campaign, if that's the answer you're looking for," he said.

The Courier attempted to interview Cardona the night of the byelection but Vision Vancouver refused to make Cardona available. Vision held a private function at the Coast Plaza Hotel.

Cardona said he didn't know who made the decision.

"That's why I reached out," he said of his email to the Courier a few days after the byelection. "Part of growing as a party that's more inclusive is being as open as we can be."