Environment is No. 1 issue for voters in federal election: poll

The federal campaign is now past the midway point, and the environment is now the most important issue for Canadian voters.
Mario Canseco
Oct 3, 2019 7:11 AM

The federal campaign is now past the midway point, and the environment is now the most important issue for Canadian voters, just a point ahead of the economy and jobs in a recent Research Co. nationwide survey.

While British Columbians remain particularly troubled by housing, homelessness and poverty, the province now has the third-highest proportion of residents – after Quebec and Ontario – who cite the environment as their main concern.

Research Co. asked British Columbians about specific environmental issues that worry them. The results outline major gender and generational shifts, as well as a perception that, out of the three levels of government, Ottawa emerges as a major disappointment.

Respondents to the survey were presented with 10 different environmental problems and asked if they were concerned about each of them. Global warming or climate change is tied for third place on the list, along with pollution of drinking water, at 55%. Slightly larger proportions of British Columbians expressed worries about air pollution (58%) and the pollution of rivers, lakes and reservoirs (57%).

Half of British Columbians (50%) are personally concerned about the contamination of soil and water by toxic waste, and slightly lower proportions are worried about deforestation (46%), the extinction of plant and animal species (45%), the depletion of fishing stocks due to overfishing (also 45%), the loss of tropical rain forests (44%) and the maintenance of the supply of fresh water for household needs (41%).

There are some interesting fluctuations across the regions. Residents of Metro Vancouver, the Fraser Valley and southern B.C. say their most pressing concern is air pollution, while those in northern B.C. select the pollution of drinking water.

The highest proportion of respondents who identify climate change as an issue they are personally concerned about reside on Vancouver Island (63%). This is an area where the federal Green Party is hoping to improve. Discussions about Canada’s role could bode well for the fortunes of the Greens.

Across British Columbia, 43% of residents believe the provincial government is not paying enough attention to the environment, while 37% think it has paid the right amount of attention and 11% say it is doing too much.

The numbers are strikingly similar for municipal governments, with more than two in five residents (43%) thinking more should be done on the environmental front, one-third (34%) saying the right course of action has been taken and 12% thinking it has been enough already.

There is a remarkable gender gap on this question. While more than half of women say none of the three levels of government is paying enough attention to the environment, only about a third of men feel the same way. 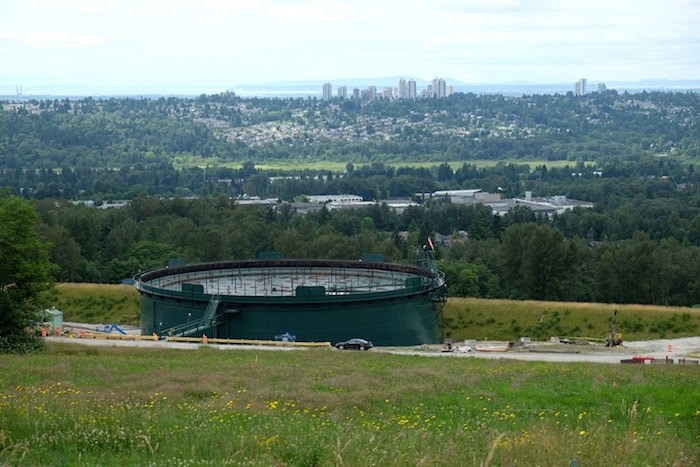 Kinder Morgan wants to tunnel or bore a pipeline through Burnaby Mountain to connect the tank storage facility (seen here) with the Westridge Marine Terminal, where tankers fill up with crude. Photo by Larry Wright/Burnaby NOW

Over the course of the past year, British Columbians aged 18 to 34 have been more likely to voice dissatisfaction with Ottawa on environmental issues, particularly about the expansion of the Kinder Morgan pipeline. In 2015, aided by efforts to foster strategic voting, this age group was extremely important in providing the Liberal Party with its best result of the century in British Columbia.

In this survey, however, the level of criticism towards government actions on the environment is highest among residents aged 55 and over, especially when assessing Ottawa. British Columbians of European descent are also more likely to express disappointment with all levels of government on this file than those of East Asian and South Asian descent.

The way this dissatisfaction with the federal government plays out in the next few weeks will depend on several factors. If the election appears to be close at a nationwide level, progressive voters in British Columbia may abandon their chance of voting for the New Democrats or the Greens in the hopes of stopping the Conservatives from forming the government.

However, the Liberals may end up having more seats than the Conservatives, but not enough for a majority mandate. This would require the support of smaller parties to establish a working government, something Justin Trudeau’s father experienced after the 1972 federal election. The environmental proposals of the smaller may be closer to becoming policy than ever before. If a scenario like this one ensues, the most important election-night speeches may be given by Jagmeet Singh and Elizabeth May.

The 1972 minority government ultimately led to the creation of Petro-Canada, at a time of grave concerns over foreign influence in Canada’s natural resource industry. Almost five decades later, the influence of the New Democrats and Greens in a minority Liberal administration could also have a lasting impact.