British Columbia's political leaders clashed in a debate on electoral reform on Thursday, with Premier John Horgan casting proportional representation as modern and even "hip," while Opposition Leader Andrew Wilkinson insisted the system was too confusing.
Nov 9, 2018 7:08 AM By: The Canadian Press

British Columbia's political leaders clashed in a debate on electoral reform on Thursday, with Premier John Horgan casting proportional representation as modern and even "hip," while Opposition Leader Andrew Wilkinson insisted the system was too confusing. 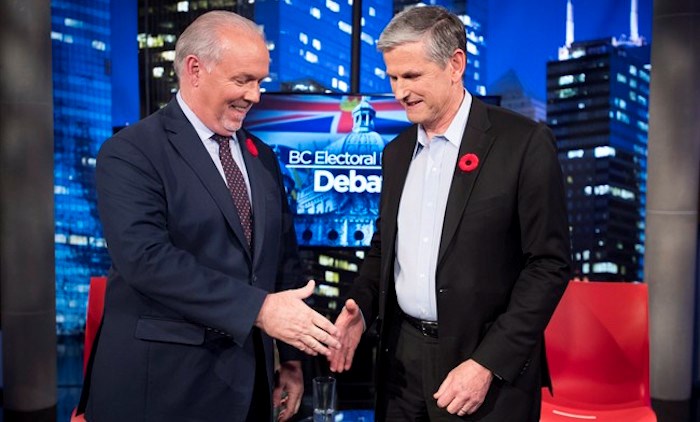 The politicians often talked over one another during the heated televised discussion on the province's voting referendum, with Horgan pushing a switch to proportional representation and Wilkinson defending the current first-past-the-post process.

Voters who mark their referendum ballots in favour of proportional representation must rank three possible systems, and Wilkinson accused Horgan of refusing to answer questions and being dishonest with voters about how the systems would work.

Horgan responded that the three systems are straightforward, and that debate hosts CBC and Global encapsulated them well earlier in the broadcast. He said he trusts B.C. residents will do their research before voting in the referendum.

"I have more confidence in the people of British Columbia, clearly, than you do," Horgan said.

The premier added that fear of change appeared to be motivating Wilkinson and opponents of proportional representation. The system is used successfully in countries around the world, while first-past-the-post in Canada consistently produces winners out of popular-vote losers, he said.

Later, Horgan adopted millennial lingo to make his pitch, telling Wilkinson, "If you were woke, you'd know pro-rep was lit."

The debate was frequently chaotic. Horgan quipped at one point that if it was just going to be two men yelling over one another, then people were likely to change the channel to "Wheel of Fortune."

Wilkinson pushed back against Horgan's suggestion that the current system only works for the BC Liberals, which won the 2001 election and the next three elections.

"Let's talk about how parliamentary systems have worked robustly across Canada and the English-speaking world for hundreds of years," Wilkinson said.

"At the riding level in the current system, if you like your MLA, you hire them, if you don't, you fire them. That's very clear and you know who they are."

Wilkinson said he was concerned that Horgan's government had selected three options for proportional representation, two of which have never been used before, out of more than a dozen possibilities.

The Opposition leader said a citizens' assembly should have been formed to create the ballot question.

The three options on the ballot are somewhat complicated, but all would mean that voters still choose at least one local MLA while the legislature's make-up more accurately reflects the popular vote.

Ballots can be returned by mail or dropped off at several locations around the province, but must be received by Nov. 30, with results expected sometime in December.

A majority of 50 per cent plus one is needed to change the system.

The New Democrats made electoral reform an election promise in 2017, and holding a referendum was a key part of their agreement with the Green party to take power in the legislature.

Green Leader Andrew Weaver did not participate in the debate.

The referendum is B.C.'s third such question on electoral reform, with previous votes in 2005 and 2009 that both ended in defeat. Horgan has said that he believes the third vote will be the province's last.