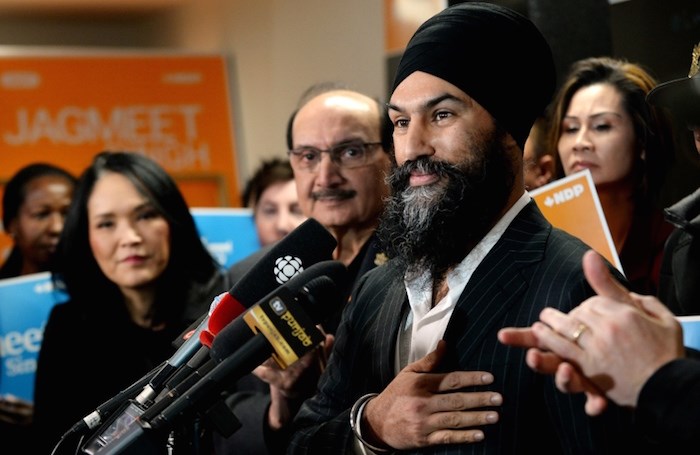 Against the backdrop of a minority Liberal government - as Justin Trudeau led his team to 156 seats, fewer than the 170 required for a majority - Singh spoke to an enthusiastic crowd of supporters at his victory celebration.

"We are going to make sure that the energy that we built over this campaign, the excitement that we built ... continues so we play a constructive and positive role in the new Parliament that Canadians have chosen."

What a night – and what an unforgettable journey this campaign has been.

With our new NDP caucus in Ottawa, I'm incredibly excited to continue our critical work to achieve the priorities that we’ve heard from people across this country. #elxn43 #ElectionDay

Singh said he had spoken to the Prime Minister ealier and let him know that the NDP continues to work hard on making sure they deliver on the priorities Canadians have.

Most popular with the crowd was his reiteration of a favourite party talking point: "We're going to make sure that the super-wealthy start paying their fair share," he said, as the crowd launched into a chant of "tax the rich, tax the rich."

Those, Singh promised, would be the priorities that New Democrats "will put at the heart of conversations" that they are now going to have with other parties in Ottawa.

Earlier in the evening, re-elected Vancouver East NDP MP Jenny Kwan says Singh has “surpassed expectations” despite his party being poised to have its caucus nearly cut in half in Monday’s general election.

"I think that people wrote him off,” Kwan said.

She said he proved doubters wrong many times over the last year, including by winning the Feb. 25 byelection in Burnaby South and in maintaining official party status for the NDP by winning more than 12 seats.

Despite the smaller caucus, the NDP could hold the balance of power in Parliament, with the Liberals expected to form a minority government.

Kwan said New Democrats will use that leverage to advance the same policy priorities it campaigned on during the election, including housing, pharmacare, cellphone bills and electoral reform.

“There are many things that we want to pursue in the House of Commons and New Democrats will be there to do just that.”

The winner of this election is not a leader or a party - the winners should be Canadians.

They want a government that works for them. Not the rich and the powerful. #ElectionDay #elxn43

Singh has represented Burnaby South since February of this year when he won a byelection to replace former NDP MP Kennedy Stewart, now the mayor of Vancouver.

Singh won that race with relative ease. He got roughly 39 per cent of the vote, with Liberal Richard Lee coming in second with 26 per cent, followed by Conservative Jay Shin with 22 per cent.

Singh and Shin were the only two returning candidates from the byelection. They were joined by Neelam Brar (Liberal), Brennan Wauters (Green), Brian Sproule (Marxist-Leninist), Al Rawdah (People’s) and Rex Brocki (Libertarian).

Roughly speaking the riding comprises most of Burnaby south of the Lougheed Highway.

This post has been edited and condensed from a live blog published on Burnaby NOW. Read that article in full HERE.