NDP leader Jagmeet Singh revealed on Monday the first part of his “bold” plan to build 500,000 affordable homes across Canada over the next 10 years. 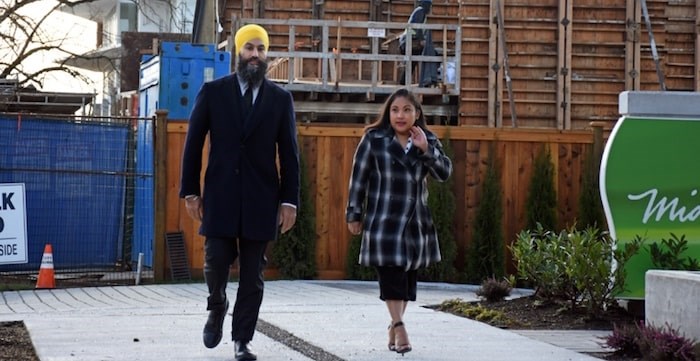 “I challenge Mr. Trudeau to include these three measures in the upcoming federal budget,” he said.

Singh was accompanied at the press conference by a local woman he said exemplified the struggles of renters in the area.

Farrah Gavina, a nurse who works night shifts at a Burnaby nursing home, said she lives in fear of being renovicted – evicted by a landlord wanting to renovate. The mother of three said she can’t afford to rent an apartment big enough for her soon-to-be-teenaged sons.

A subsidy for renters paying more than a third of their income on rent could help many Canadians pay their bills, he said. Singh had few details on the proposal, saying he would have more information in the coming months.

“We’ll look at the different mechanisms to deliver this relief,” he said.

The plan for 500,000 affordable housing units includes both private and public development, Singh said. He had few details on Monday on his party’s vow to “aggressively” invest in non-market housing, but said his plan to eliminate federal sales taxes for the construction of affordable homes will incentivize developers to build housing for those who need it most.

According to the Globe and Mail, the tax exemption was part of the Liberals’ 2015 campaign platform but the government retracted the promise in 2017, saying research had shown it was not the best strategy to build affordable housing.

The third part of Singh’s challenge to Trudeau called on him to double a federal tax credit for first-time homebuyers from $750 to $1,500. The money would help cover costs incurred in closing a sale, he said.

“We want to support people so they can one day achieve that dream of home-ownership, and providing that extra help will ensure that people can actually buy a home,” he said.

Singh’s Conservative opponent in the byelection, Jay Shin, issued a press release shortly after the New Democrat’s press conference. The Conservatives said Singh’s tax credit amounts to an endorsement of Conservative policy, as that party introduced the tax credit when it was in power in 2009.

“Jagmeet Singh is using the Burnaby South byelection to save his political life, and now he’s trying to sell Conservative ideas as his own,” Shin’s statement said.

Before Singh’s announcement, his Liberal opponent, Richard Lee, touted the government’s plan to spend $40 billion over the next decade on its national housing strategy.