Justin Trudeau delivered a feisty, campaign-style speech in Vancouver-Kingsway Sunday night as he introduced former TV news anchor Tamara Taggart as the riding's Liberal candidate in the fall federal election.
0
Mar 25, 2019 7:20 AM By: The Canadian Press 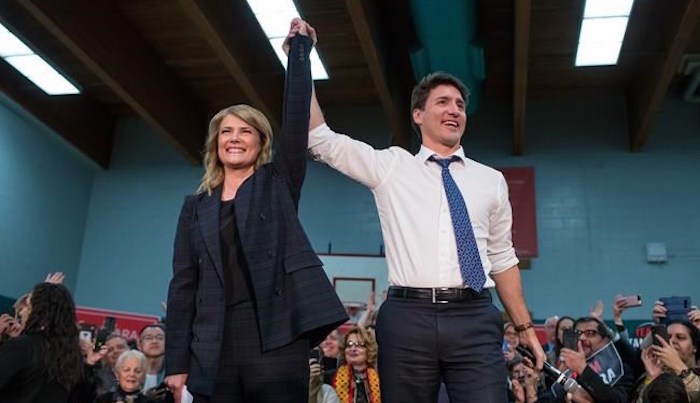 The prime minister fired off a flurry of verbal jabs at Conservative Party leader Andrew Scheer, and also former prime minister Stephen Harper, giving a glimpse of what could be a heated campaign for the October election.

"Investing in people and communities is the way to grow the economy. Stephen Harper and the Conservatives still don't get it. Andrew Sheer doesn't get it either," he said to a gym full of enthusiastic supporters.

"Under Stephen Harper, Canada had the worst growth rate we'd had since the depths of the Great Depression under R. B. Bennett."

Trudeau then accused Sheer's Conservatives of hoping to continue Harper's policies by giving tax breaks to the wealthy while cutting programs for the middle and lower classes.

"They still think the way to create economic growth for everyone is to cut programs and give advantages and benefits to the wealthiest," he said. "Well, that doesn't trickle down to anyone and it didn't work for 10 years."

Trudeau pitched the upcoming election as an opportunity for all Canadians to step up and start talking about the kind of country they want to leave for their children and grandchildren.

"Do we want to invest in the middle class — shine on the world stage," he asked, before warning that Canada "is seeing the rise of populism, aggressive, fear-based politics, just like the rest of the world."

The crowd roared its approval when the prime minister suggested the best way to counter divisive populism is by recruiting "strong, compassionate people who've focused their lives on bringing people together and on empowering people."

He lauded Taggart as one of those people from all walks of Canadian life who have invested in their communities in various ways to grow the economy, respond to the challenges of climate change and put Canada on the world stage.

Taggart admitted feeling a bit overwhelmed and emotional at being on stage, especially seeing her children holding up signs that read, "Team Tamara."

The Order of British Columbia recipient said she wants to be the people's voice in Ottawa, adding that her media career made her a good listener.

While Taggart steered clear of talking about the specifics of her campaign platform at the event, she has previously said that she wants to focus on affordable housing, protecting the environment while boosting the economy, and women's health and safety.

She's likely to face a tough challenge in Vancouver-Kingsway, which has been held by New Democrat MP Don Davies since 2008.

But as Taggart told her supporters, "a woman can follow her dreams and achieve anything — anything she wants."