The consensus from Mayor Kennedy Stewart and councillors representing two civic political parties is that Canadians’ decision Monday to elect a Liberal minority government in Ottawa should bode well for Vancouver. 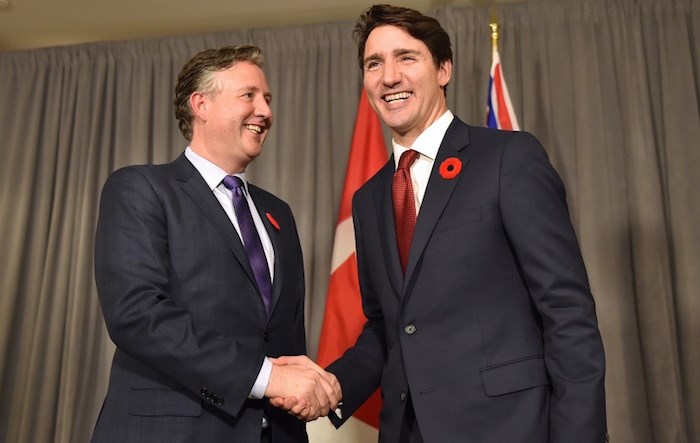 The consensus from Mayor Kennedy Stewart and councillors representing two civic political parties is that Canadians’ decision Monday to elect a Liberal minority government in Ottawa should bode well for Vancouver.

Stewart noted the Liberals’ commitments on its two-year-old national housing strategy, supporting a permanent transit fund for Metro Vancouver and being open to discussing an expansion of a safe supply of drugs align with the agenda voters elected him on last fall.

“Last night was great news for Vancouver and I expect the new government to deliver on affordable housing, safe supply and a SkyTrain all the way to U.B.C,” the mayor told the Courier by telephone Tuesday.

But Stewart acknowledged solidifying that alignment will rely on the NDP members of Parliament – reduced to 24 across the country – to support and challenge the Liberals to ensure commitments are rolled out in an impactful way.

He argued both parties are closely aligned on housing, transit and addressing the opioid crisis. Stewart met with Prime Minister Justin Trudeau and NDP leader Jagmeet Singh during the campaign and was pleased with their commitments on the issues.

“I’m very optimistic – this is the best chance we’ve had in a very long time for these kinds of investments,” said Stewart, a former longtime NDP MP in Burnaby who ran successfully as an independent to win the city’s mayoral race in October 2018.

The return of Trudeau and most of his Liberal team to Parliament comes just days after Stewart publicly blasted Conservative leader Andrew Scheer, suggesting his election as prime minister would be “a disaster for the city.”

The mayor’s comment was based on expert analysis and his reading of the Conservatives’ platform, which he concluded did not commit to build more affordable housing for Vancouver, extend the SkyTrain to the University of B.C. or take measures to combat the opioid crisis.

“I call it as I see it,” said Stewart, when asked to reflect on his stand against Scheer and a potential Conservative government.

“I don’t know how long I have as mayor of Vancouver, and you have to pick your spots, and I did. I got it right this time. I do think that the Conservatives would have been very bad for Vancouver.”

Green Party Coun. Adriane Carr and NPA Coun. Lisa Dominato echoed the mayor’s comments about how policies promoted by the Liberals and NDP are in alignment with city issues such as creating more affordable housing.

And both said a minority government should prove to be healthy for democracy, with parties having to work together to advance policy on housing, transit and drug addiction.

“I am really happy it’s a minority government situation,” Carr told the Courier Tuesday. “Minority governments are better for people, for voters. They require more collaboration rather than bull-headed movement forward on a single agenda.”

Carr said Trudeau didn’t deserve a majority because he reneged on a promise to reform the federal electoral system and bought the Trans Mountain pipeline.

“If you couple that with the shenanigans around Jody Wilson-Raybould, that was really the clincher for me,” said Carr, referring to the SNC-Lavalin affair that saw Wilson-Raybould booted from the Liberals, only to retain her seat in Vancouver-Granville Monday as an independent.

Carr’s hope, she said, is that Trudeau will reach out to the NDP and three Green members of Parliament to advance those parties’ platforms as a trade-off to securing their support in confidence votes in the House of Commons.

“I hope that one of the requests that’s made is that there is a pullback on Trans Mountain [pipeline expansion] in light of the more clear, compelling and scientific evidence that we have to reduce greenhouse gas emissions radically and quickly,” Carr said.

Added Carr: “If the NDP holds firm on, for example, housing and on transit, and on the opioid crisis, we could be sitting in a very good position as a city.”

Dominato said the election of a minority government signals the need to have members of Parliament work across party lines in order to create policy that responds to needs of cities.

“At a civic level, it’s really important that we are able to work across all party lines to achieve what’s in the best interest of Vancouver,” she said of a council that has a mix of parties, with no majority.

Dominato said she agreed there continues to be alignment of the Liberals’ agenda with city issues, including fighting climate change and strengthening the economy.

“It’ll be interesting to see, potentially, how the Liberals work with the NDP, with the Greens and others who were elected,” she said.

When asked about her reaction to the mayor’s criticisms last week of Scheer and the Conservatives, Dominato repeated her comment that politicians at all levels of government have to work across party lines to get stuff done.

“We need to be prepared to work with whoever the prime minister is, whoever the government is,” she said.

“We need to be focused on what’s important for Vancouver and how we’re going to get our fair share from Ottawa. In order to do that, we need to focus on having strong relationships with the prime minister, the government, but also with all parties.”

The mayor, meanwhile, plans to go to Ottawa in mid-November to meet with Trudeau and his new ministers to renew his request for funding and policy changes.